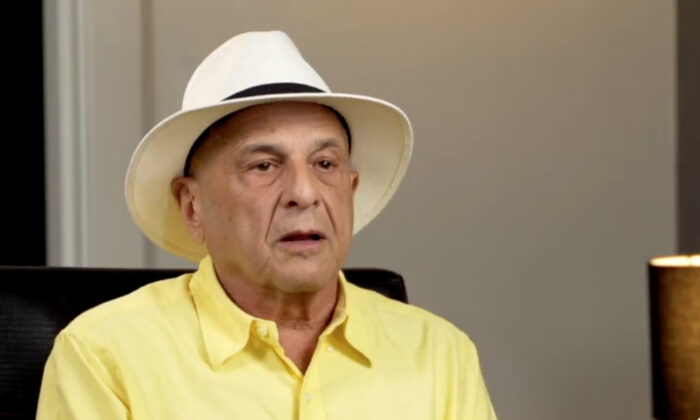 Roger Simon in an interview with EpochTV's CrossRoads. (Screenshot via The Epoch Times)
Constitutional Rights

War Over Constitution at the Heart of Our Country’s Division: Roger L. Simon

A war over the Constitution has brought divisions in America to a “truly unhealthy” level, according to Roger L. Simon, co-founder of PJ Media and a senior political analyst for The Epoch Times.

“We have a war over the Constitution going on now. That’s probably the heart of the big split,” Simon told Joshua Phillip, host of EpochTV’s “CrossRoads” program.

“I think the divisions reached the level of being truly unhealthy,” Simon continued. “What’s going on is a bloodsport, and it’s extremely worrisome to me as a relatively old guy—very well worried about the future generations.”

Simon mentioned that his daughter is turning 23 soon and the world she’s moving into is not the world anybody over 50—or even over 30, 40—lived in.

However, the ongoing Maricopa County, Arizona, forensic audit of the 2020 presidential election could lead to “a more extreme split,” predicted Simon.

The final report for Maricopa’s audit, which started on April 23, is expected to be out in August.

Democrats have largely opposed the audit. The Department of Justice wrote a letter in May to Arizona Senate President Karen Fann, expressing concerns with the audit. The move was criticized by Republicans as an attempt to block the audit.

Simon said it’s very hard to know exactly what will happen, because neither the current Department of Justice, nor the Supreme Court is likely to solve this problem.

Simon also said that Big Tech and the educational system “work together in a horrible way” to suppress free speech, which has contributed to the split.

“I graduated from two Ivy League schools, and I don’t recognize them anymore. They are now kind of ‘Institutes of Woke,’” Simon said. “When I went to both of those schools, you could say anything you want. Now you can’t say anything.”

Simon graduated from Dartmouth College and the Yale University.

Simon pointed out that Big Tech sees the Chinese communist system as “more efficient than democracy.”

He noted that Google has already tried to develop a censored search engine specifically for the Chinese regime, a project know as Dragonfly.

“The actual battle is going to occur via this election recount—that will determine whether our country goes back to the Constitution, or goes all the way to China,” Simon continued. “Because these people, these tech giants, voted for China a long time ago.”

However, he said that things are not all doom and gloom, noting a grassroots movement to return to the Constitution.

“I see it going on here in Tennessee right now with the rank and file,” he said. “Everybody’s turning back to the Constitution and saying to their legislators, ‘Looky here—we run the show here in our own hometowns.'”

“And this is very good, because I think that [Thomas] Jefferson and [James] Madison really would be smiling down on that, because that’s what they were hoping would happen,” Simon continued.

Simon noted the Founding Fathers tried to limit the power of the federal government and give more power to the states.

“And actually, it is happening. And I think that’s one of the most optimistic things about our country right now,” Simon said.