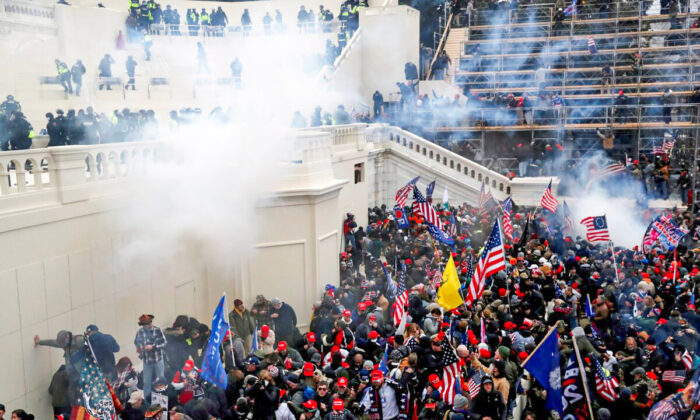 Police release tear gas into a crowd during clashes at the U.S. Capitol Building in Washington on Jan. 6, 2021. (Shannon Stapleton/Reuters)
Viewpoints

War Fever on the Left

“Every Day Is Jan. 6 Now” read the New York Times headline on, as it happens, the day the paper itself recorded as Jan. 2.

Well, of course we weren’t meant to take the headline literally, as if “Groundhog Day” had jumped off the silver screen and come to life, suddenly, a day short of four weeks early.

But the figurative meaning of the editorial conceit must have been almost equally baffling to anyone not living in the media bubble inhabited by The New York Times and its most devoted readers.

To understand it, you have to know in advance, first, that President Donald Trump’s complaints of electoral fraud in the 2020 presidential election were not, so far as the media are concerned, made in good faith but amounted to a “Big Lie.”

This proposition is not open to debate in the media.

Next, you have to know that the propaganda version of the invasion of the U.S. Capitol on Jan. 6, 2021 by a rag-tag group of protestors originally assembled to support the then-President’s claims of a stolen election, was that it amounted to, in spite of all appearances to the contrary, an “insurrection.” Or, in the Times’s words “an existential threat” to American democracy.

This is not open to debate in the pages of The New York Times.

Finally, you have to know that the sinister forces behind this supposed insurrection or existential threat, led by or on behalf of Trump, remain poised to repeat their action at any moment and so to threaten democracy itself. “Jan. 6 insurrection was a dress rehearsal for something far worse,” writes Leonard Pitts Jr. in The Tampa Bay Times.

This, too, is not open to debate in the media.

Can you think of any reason why Democrats and the media might want to make you believe that Trump and Trumpism are preparing to stage a coup, or even a civil war, in order to retake power from legitimately elected Democrats?

“A year after the Capitol riot, the spectre of civil war haunts America,” headlined the (London) Sunday Times in its first edition of the new year.

It would have been more accurate to report that “the spectre of civil war” haunts the American (and now also, apparently, the British) media, as well as the academic left, where the article’s author, Sarah Baxter, has found as her interview subject Barbara Walter, author of a new book called “How Civil Wars Start.”

I haven’t read this book myself, but I’m pretty sure that, to start a civil war, you have to have—I don’t say a majority, but a pretty substantial number of civilians in a country who want one. And outside of Antifa and its media boosters, the Democratic caucus in Congress and portions of the deep state, the appetite for armed struggle in this country, so far as I can see, is somewhere approaching zero.

Even the actual Jan. 6 protestors of last year were much more—much, much more—in the American tradition of civil disobedience than they were armed rebels like the Confederate army at Bull Run. That is why it is a deliberate misnomer to call their demonstration-cum-riot an “insurrection.”

The New York Times editorial with which I began is a bit more subtle than the “civil war” propagandists mentioned above.

In keeping with the time-honored Democratic custom of never letting a crisis go to waste, the editorialists are attempting to identify the “existential threat” of which the Capitol breach is seen as being only the beginning with Republican efforts in the states to legislate for safeguards of electoral integrity—and Republican resistance in Congress to Democratic efforts to remove such safeguards.

The cynicism of the establishment media in attempting to make a political mountain out of this partisan mole-hill is breathtaking, but there will always be those, otherwise sympathetic to Republicans and conservatives, who are willing to show their bipartisan bona fides by allowing themselves to be shamed by it.

Writing in The Wall Street Journal, Gerard Baker insists that “the Jan. 6 riot was a disgrace—as the riots of the previous summer were a disgrace—and continued attempts by many Republicans to play it down, ignore it or even pretend it didn’t really happen are a lingering cloud over the right’s own claims to the democratic process.”

The attempt to be even-handed here by equating a couple of hours and a minimal quantum of violence on Jan. 6 with hundreds of riots all over the country which lasted for months, cost thousands of deaths and injuries and billions of dollars in property damage is presumably designed to win over at least some elements of the progressive left by conceding that there is cause for outrage on both sides.

However, I don’t think that any similar concession by the progs is at all likely to be forthcoming. Do you? I think that, like all bullies, they have nothing but contempt for such weakness on the part of those they despise.

Even if he’s right, Baker does his readers a disservice by not noticing that the progressive outrage, unlike his own, is manufactured for political ends, being of a piece with the Democrats’ long-standing hatred of Trump, and nothing to do with the Capitol riot (or alleged “insurrection” ) itself, which is only a pretext for advancing their own partisan agenda.

We may not be engaged (this time) in a real civil war in America, but the uncompromisingly war-like, take-no-prisoners tactics of the left suggest that their claims of being so engaged are the one thing they may be said truly to believe.