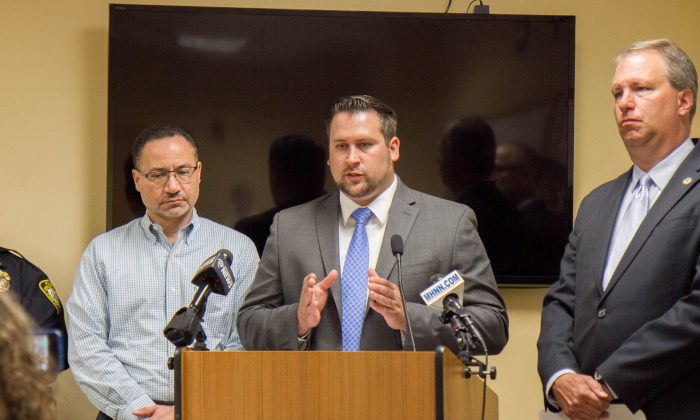 Supervisor Dan Depew announces additional funding for three more police officers for the Town of Wallkill during a press conference at the Wallkill Police Department on May 26, 2016. (Holly Kellum/Epoch Times)
New York

WALLKILL—Three more full time police officers will be added to the Town of Wallkill’s police department after the Town Board approved a $300,000 budget transfer.

The funding comes from the Town’s general fund with possibly some fund balance if needed at the end of the year, but Wallkill Town Supervisor Dan Depew said they have committed to continue funding the positions, even if it requires raising taxes.

“The war on drugs is back,” Depew said. “All the data points to 2014 and the end of 2013 as a major spike in the narcotics situation, affecting everything else.”

This year the Town is on track to double the number of arrests made last year.

District Attorney David Hoovler said his office did 195 narcotics buys last year, 33 percent of which were in the Town of Wallkill.

He attributed this to the combination of the large number of businesses in the Town, a large population, and the Town’s proximity to the highway.

The Town is still in the process of looking for officers. Once they do find the right candidates, it will bring the police roster up to 26, a 13 percent increase from the current total.

“We will never have enough,” Depew said. “If I were to add 10 more people here in the Town of Wallkill with the Board’s consent, it wouldn’t be enough.”