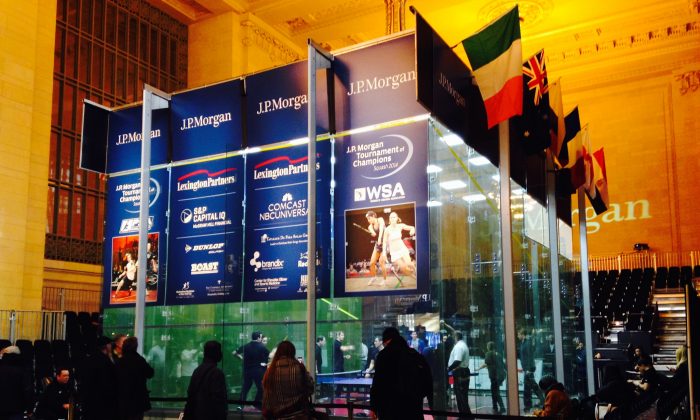 The Ping-Pong matches, however, weren’t about winning. Each team paid $3,500 to participate. The money goes to the youth mentoring organization Big Brothers Big Sisters of New York, a nonprofit that serves children in need of adult role models.

This year, 32 teams participated and raised over $100,000 for Big Brothers Big Sisters as part of National Mentoring Month.

The winning team received the Tournament of the Champions Pong trophy, but it is only an honorary title.

Because of the high foot traffic in Grand Central, many people stopped to watch the tournament. The games became more intense throughout the day as teams were eliminated, but participants said it is all in good fun.

“This is my fourth year competing, it’s a great cause, great charity and I just love doing it,” said Chris Chang, managing director at Macquarie Bank.

Ping-Pong is not a sport usually associated with financiers, but event organizers said it is the perfect choice for the occasion.

“Ping pong is kind of the puppy of racket sports,” said Andrew Lipman, Trustee of Big Brothers Big Sisters of New York City. “Most everybody plays and it’s accessible to all kinds of people, regardless of age or background, so it’s a unifying sport.”

“[You’re] able to play all year round, you don’t need to be out in the cold,” said Sun.

Each year, the Ping-Pong event takes place on the last day of the J.P. Morgan Tournament of the Champions Squash. The host of the squash tournament provides the space for Big Brothers Big Sisters for their cause.