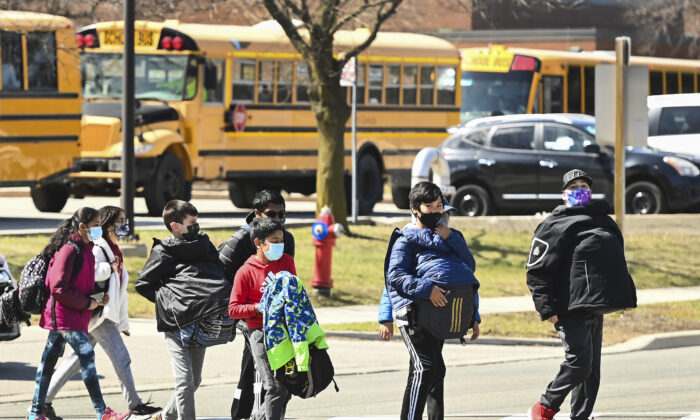 Students cross the street on their way to school in Mississauga, Ont., on April 1, 2021. (The Canadian Press/Nathan Denette)
By Jack Phillips

Fourth- and eighth-graders had the largest-ever decline in math this year in nearly every state, according to a national educational assessment, drawing warnings from White House officials.

Across the country, math scores saw their largest decreases ever. Reading scores dropped to 1992 levels. Nearly four in 10 eighth graders failed to grasp basic math concepts. Not a single state saw a notable improvement in their average test scores, with some simply treading water at best.

Those are the findings from the National Assessment of Educational Progress—known as the “nation’s report card”—which tested hundreds of thousands of fourth and eighth graders across the country this year. It was the first time the test had been given since 2019, and it’s seen as the first nationally representative study of the pandemic’s impact on learning.

“In 2022, the average fourth-grade mathematics score decreased by 5 points and was lower than all previous assessment years going back to 2005,” according to the Nation’s Report Card commissioned by the National Assessment of Educational Progress, published Monday.

Math scores were worst among eighth graders, with 38 percent earning scores deemed “below basic.” That’s worse than 2019, when 31 percent of eighth graders scored below that level.

Officials and media outlets blamed the COVID-19 pandemic, which left millions of children learning from home for months or more, for the drop. The results released Monday reveal the depth of those setbacks and the size of the challenge facing schools as they help students catch up.

And some officials U.S. Secretary of Education Miguel Cardona suggested that COVID-19 contributed to the drop in test scores, but he did not mention the widespread lockdowns, stay-at-home orders, and virtual learning mandates that were imposed on children in 2020 and 2021. Numerous studies have shown that children have the lowest risk of developing severe COVID-19 symptoms, hospitalization, or death.

“If this is not a wake-up call for us to double down our efforts and improve education, even before it was—before the pandemic, then I don’t know what will,” Cardona told CNN on Monday morning.

Throughout the pandemic, top teachers’ unions, including the American Federation of Teachers, pushed for stay-at-home orders. According to a report commissioned by the National Right to Work Committee in 2021, school closures and virtual learning—championed by teachers’ unions—caused widespread negative impacts on children, including a spike in child suicide attempts.

The NAEP test is typically given every two years. It was taken between January and March by a sample of students in every state, along with 26 of the nation’s largest school districts. Scores had been stalling even before the pandemic, but the new results show decreases on a scale not seen before.

Peggy Carr, the head of the U.S. Commissioner of the National Center for Education Statistics, explained that “what we’re seeing is (lower performing) students … dropping even faster, and we’re also seeing students who were not showing declines—students at the top, meaning students at the higher performing levels—they were holding steady before the pandemic or even improving.”

But she stipulated to CNN that “now all the students, regardless of their ability, are dropping. That is the point we need to be taking away from this report.”