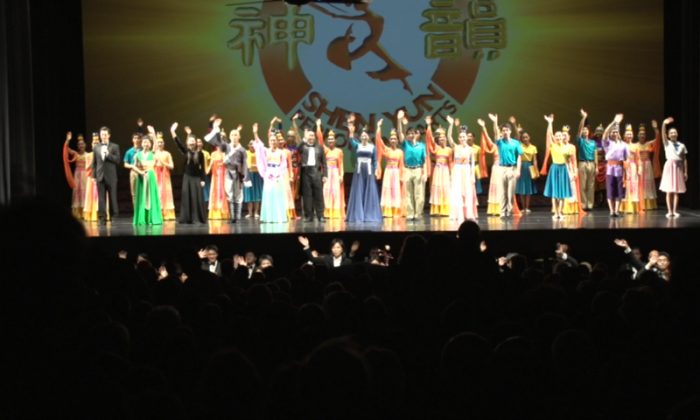 WA Labor MP: Shen Yun Should be Celebrated by Chinese the World Over (Video)

Ms. MacTiernan was at the spectacular New York-based Shen Yun performance held at The Regal Theatre in Perth, Saturday evening May 3.

“I think the dancing is absolutely exquisite; the costumes, the physical beauty of all the [performers], particularly the women, and just the incredible skills and energy and joy that is coming out of the performances is amazing,” the parliamentarian said.

“I think that what the dancers are emanating is real joy of life and good karma, I think the feel is very, very, very positive and I think all Chinese would greatly celebrate the beauty and the richness and the good spirits that we are seeing here tonight.”

Ms. MacTiernan noted some of the dances had its origins in classical Chinese dance, she said.

“And you can see those similarities from some European forms, which obviously had been over the centuries influenced by the Chinese,” she said.

Ms. MacTiernan was also impressed by the orchestra which combines the beauty and distinctiveness of Chinese sounds with the power and precision of a Western orchestra.

“I think that the music is perhaps a little more Westernised coming together with it [Chinese], really does make it very, very accessible and very exciting for Western audiences,” she said.

According to Shen Yun website, “Sophisticated dance techniques, an orchestra joining instruments from both the East and West, beautiful costumes, and a stunning back drop—this is Shen Yun at first glance.”

“So many people out there to celebrate this great tradition—the use of multimedia, the way in which the use of the [screen] projection with the dancing—is amazing.

“It’s classical dancing but with the particular music style and the use of the moving screen; [Shen Yun] has created a really very contemporary accessible play.”

She said she would suggest people come and see “something that is a very exquisite and engaging,” and should be celebrated by Chinese the world over.

Ms. MacTiernan said whoever created the Shen Yun dances and whoever made the extraordinary costumes should be incredibly proud.

In closing, she delivered a heartfelt message to the Shen Yun International Company.

“I would thank you so much for your great skills and your great beauty and energy that you put into this performance tonight,” she said. “It really has been a joy and I would likewise thank the choreographers and the people that made those absolutely magnificent costumes.

“You all have been superb and you should be very proud of what you’ve done.”