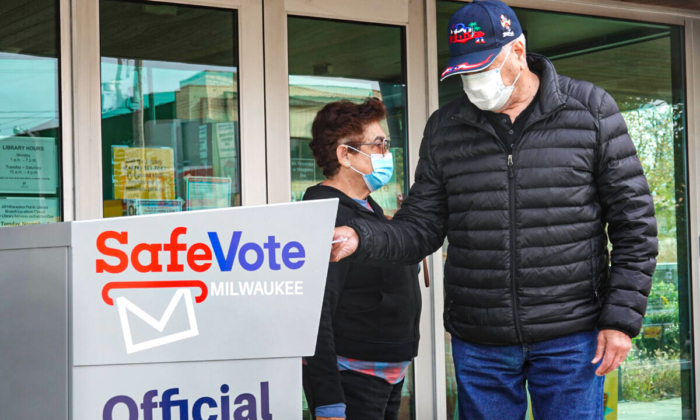 Residents place mail-in ballots in a ballot box outside of the Tippecanoe branch library in Milwaukee, on Oct. 20, 2020. (Scott Olson/Getty Images)
By Steven Kovac

At least 137,500 absentee ballots were cast through unlawful vote trafficking throughout several of Wisconsin’s largest cities in the 2020 election, according to research presented last week to the state Assembly’s Committee on Campaigns and Elections by the public interest organization True the Vote (TTV).

Ballot trafficking is an activity in which absentee ballots and votes are solicited, sometimes in exchange for money or other valuables. They are then collected through a process called “harvesting” and delivered to drop boxes by intermediaries (someone other than the voter), who are often paid a per-ballot fee by partisan actors.

“An organized crime against Americans” is how TTV cyber expert Gregg Phillips described to the committee what happened in Wisconsin and elsewhere during the 2020 election.

Based on his 15-month study of election practices in Georgia, Arizona, Wisconsin, Pennsylvania, Texas, and Michigan, Phillips estimates that at least 4.8 million votes were trafficked nationally.

According to the True the Vote report, 242 intermediaries in metro Atlanta made 5,668 stops at drop boxes during elections in late 2020. In its report, TTV said it obtained 4 million minutes of drop box video surveillance tape that helped to document its Georgia findings.

“Many of the traffickers we spoke with do not recognize what they are doing as being a problem,” TTV spokesperson Catherine Engelbrecht said.

The study found that in Arizona, 202 intermediaries made 4,282 separate visits to ballot boxes in Maricopa County.

Several Arizonans have since been indicted for election law violations, with at least one conviction, according to Phillips.

“From these pings, it can be determined where you work, where you sleep, and even what floor you are on within inches,” he said.

The Wisconsin study focused primarily on the Milwaukee County area, with some partial initial data coming from Racine and Green Bay, where the study will soon be further expanded, Phillips said.

In those three areas, TTV’s cell phone ping research found that in the two weeks from Oct. 20 through Nov. 3, 2020, 138 individuals each visited the location of a nongovernmental organization at least five times and made a combined total of 3,588 trips to absentee ballot drop boxes.

“That’s an average of 26 trips per person to drop boxes in the Milwaukee area,” Phillips said.

“Is this evidence of fraud?” committee member Lisa Subeck, a Democrat, asked.

“Vote trafficking is being done through the process. It is illegal,” replied Engelbrecht, who stated that every vote cast illegally cancels the vote of a legitimate voter.

Wisconsin Statute 6.87 (4)(b)1 provides that an absentee ballot envelope, in which the cast absentee ballot is placed, must be “mailed by the elector, or delivered in person, to the municipal clerk issuing the ballot or ballots.” The Circuit Court in Waukesha County in Teigen v. Wisconsin Elections Commission, has agreed, holding that use of drop boxes for absentee voting violates Wisconsin law.

Drop boxes, if unattended by a municipal clerk or in an unauthorized location, are illegal under Wisconsin law. The law is currently being challenged in the Wisconsin Supreme Court.

In her testimony, Engelbrecht stressed that the TTV report was focused on the process and wasn’t attempting to prove the 137,551 votes were illegal votes.

State Rep. Dave Murphy, a Republican member of the committee, stated: “If you vote in an illegal way, it is an illegal vote. If the process is illegal, the vote is illegal.”

When asked by Rep. Donna Rozar, a Republican, to name the NGOs in the study that were repeatedly visited by intermediaries, Phillips declined.

Phillips and Engelbrecht testified that enormous nonprofits, such as National Vote at Home, are promoting voting from home and favor doing away with in-person voting on Election Day entirely.

“Most countries around the world vote in person on election day, including Ukraine,” Phillips said.

She said that some U.S. election jurisdictions view inaccurate voting rolls as a “feature rather than a bug.”

“Our rolls are abysmal. Bad records are the gateway to fraud,” Engelbrecht said.

“If you can’t verify identity, you can’t do anything else,” Phillips said.

“We know the names but are not disclosing them,” Phillips said. “Anyone can buy them commercially. However, law enforcement would need a warrant.”

In the other states studied, government-made video surveillance tapes of ballot drop boxes obtained through Freedom of Information Act requests were used as part of the process of estimating how many ballots were trafficked, along with personal interviews with intermediaries and other tipsters and cell phone ping data.

Engelbrecht told the committee that in Wisconsin, in September of 2020, her organization set up a hotline to receive tips from informants.

Unlike other states where video surveillance footage of the drop boxes was made available to TTV investigators, Engelbrecht said that only one of the 17 Wisconsin localities studied provided TTV with video.

Engelbrecht stated that in the summer of 2020, the Wisconsin Election Commission (WEC) announced it approved of video surveillance of the state’s drop boxes, as recommended by the federal Cybersecurity and Infrastructure Security Agency (CISA).

Neither did WEC provide to localities written guidelines based on CISA’s recommendations for the locations where the drop boxes were to be placed, according to Engelbrecht.

She testified that across the country, the majority of the ballot drops surveilled typically happened between 8 p.m. and 5 a.m.

She told the committee that the removal of 234,000 problem names from Wisconsin’s registered voter rolls, as recommended by the Electronic Registration Information Center, was stopped by a lawsuit.

Forty-nine-year veteran elections attorney James Bopp Jr. came before the committee to provide a legal perspective to the facts presented in the TTV report.

Bopp has litigated 200 election lawsuits and is currently legal counsel to TTV. He is also representing special counsel Gabelman in several lawsuits against him stemming from his investigation.

Bopp testified that filing an avalanche of lawsuits was part of a years-long effort by Democrats “to make the whole system more susceptible to fraud and abuse.”

He said 425 lawsuits were filed across America by Democratic Party operatives or front organizations in the runup to the 2020 election.

Bopp asserted the suits were designed to ensure ineligible people were maintained on voting rolls; to expand voting to every voter on the rolls, whether active or inactive; and “to tear down every other anti-fraud protection, such as prohibiting signature verification and striking down witness requirements for absentee voting.”

Turning to Wisconsin, Bopp pointed the committee to what he called “the corrupt and illegal activity and administration of election laws for partisan ends engaged in by your Wisconsin state government and municipalities designed to maximize the number of Democrat votes.”

“Despite clear and unequivocal state law, drop boxes created the infrastructure to accomplish all of this,” he said. “Drop boxes left unstaffed and located anywhere clearly violated state statutes.”

He criticized what he said was the “grossly partisan, corruptly political, and blatantly illegal” actions of the people administering Wisconsin election laws.

Bopp asserted that the actions in Wisconsin gave significant partisan political advantage to Democrats, exactly the people the plan was designed to help.

“Ruthlessly exploited by large-scale organized and illegal ballot harvesting operations, involving not-for-profits and the people working with them, (the scheme) could very well have influenced the outcome of the 2020 election,” he said.

“What has been disclosed—and, in my view, proven—is that there were sufficient irregularities in the 2020 election that a court, at the time, could have reached the conclusion that the true result cannot be determined. But that time has passed.

“It’s not about overturning the 2020 election. It’s about the future. The situation is crying for reform.”

Rozar reminded the audience that numerous election reforms passed by the legislature have been vetoed by Gov. Tony Evers, a Democrat.

Neither Evers nor state Attorney General Josh Kaul, also a Democrat, responded by press time to requests for comment.