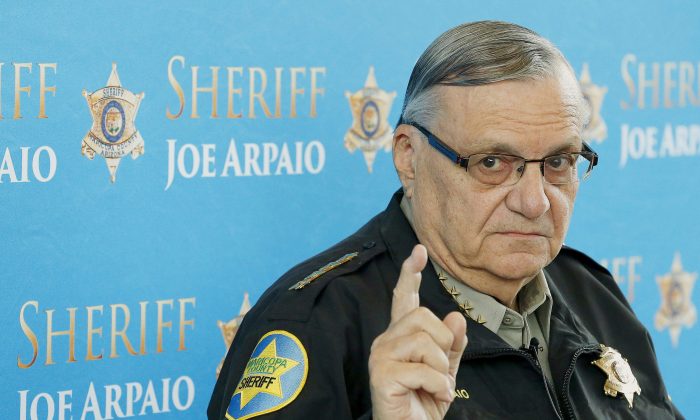 Maricopa County Sheriff Joe Arpaio speaks at a news conference at the Sheriff's headquarters in Phoenix on Dec. 18, 2013. (AP Photo/Ross D. Franklin)
US

An Arizona sheriff who became a national political figure by cracking down on illegal immigration and jailing inmates in tents lost Tuesday after 24 years in office, eliminating the last vestige of the state’s decade-old movement of local police confronting people in the country illegally.

Voters booted Sheriff Joe Arpaio in favor of Democrat Paul Penzone, a retired Phoenix police sergeant who criticized the 84-year-old lawman for focusing too much on promoting himself as “America’s Toughest Sheriff” and too little on improving public safety.

His loss came as mounting legal problems in a years-old racial profiling case led to a criminal charge two weeks before Election Day. Arpaio was charged with contempt of court for ignoring a judge’s order to stop traffic patrols that targeted immigrants. He could face jail time if convicted.

Critics have slammed Arpaio for racking up $130 million in taxpayer-funded legal costs to defend him in lawsuits, including $48 million that has been spent so far on the profiling case.

The sheriff earned high marks from voters early in his tenure by jailing prisoners in tents in the desert heat and dressing them in pink underwear. His popularity has waned over the past few elections, but a devoted base of supporters and impressive campaign fundraising have helped him pull out wins.

The sheriff raised $12.3 million, most of it from people living in other states who supported his past immigration crackdowns. The movement lost steam after immigrant-smuggling traffic into Arizona declined and several state immigration laws were thrown out by the courts.

Other major politicians who anchored the movement have either been ousted or decided not to run for public office again.

But anti-immigration rhetoric from Donald Trump energized the state’s conservative base and gave the Republican sheriff an ally. Arpaio introduced the GOP nominee at rallies and gave a speech at the national convention.

Over the last four years, the courts have stripped Arpaio of his power to conduct immigration crackdowns. His officers were found to have profiled Latinos in traffic patrols that targeted immigrants.

The sheriff, who acknowledged the contempt violations but insists they were unintentional, has pleaded not guilty to the charge. If convicted, he would face up to six months in jail.

His plan of attack against Penzone, who lost to the sheriff in 2012, consisted mostly of TV ads that claimed Penzone assaulted his wife in a 2003 dispute. The Democrat denies the claim and sued Arpaio, alleging defamation.

Penzone has raised $1 million and gotten a boost from $2.9 million in campaign mailers and commercials from an anti-Arpaio group funded largely by liberal hedge-fund tycoon George Soros.

Like Penzone, the Soros-funded group has attacked Arpaio for botching investigations into hundreds of sex-crime cases.