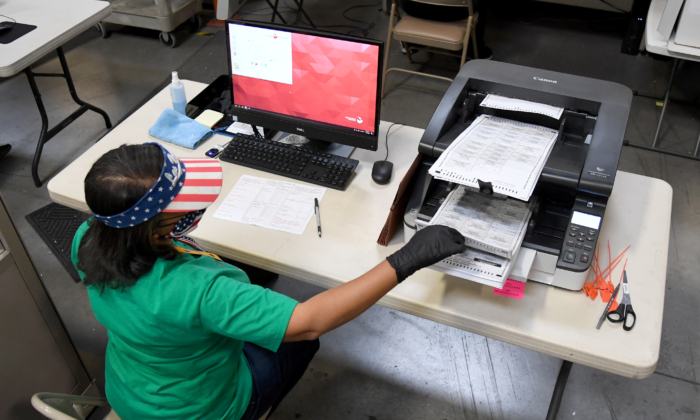 A U.S. voter rights group informed the Department of Justice on Dec. 3 of a link between the Nevada election emails system and a Pakistani company with ties to military and intelligence.

True the Vote requested the Nevada voter file from the secretary of state after the Nov. 3 election. The state responded with a voter file in an email, but the message was copied to Waqas Butt, CEO of Pakistani-based Kavtech Solutions Ltd.

In a letter (pdf) to Assistant Attorney General for National Security John Demers, Catherine Engelbrecht, president of True the Vote, wrote that she was shocked to discover the Pakistani address in the carbon copy field of the email.

“The fact that this company was cc’d on an email containing access to the Nevada voter registration database appears to be evidence of a breach within the Nevada Secretary of State’s email system,” Engelbrecht wrote.

“Obviously, the problems that such a breach may evidence include access to at least the voter registration information of Nevada residents. At worst it could reveal a breach that gives a foreign power access to not only the State of Nevada’s systems, but also to the email systems of anyone whom the State communicates with via email.”

Waqas Butt wrote in an email to The Epoch Times that the claim about his firm’s ties to Pakistani intelligence is “baseless.”

“As a matter of fact, Kavtech have never worked for any government department nor had any sort of connection with them. Whoever is claiming of any such connection should provide information to support their claims,” Butt said.

The CEO also claime that True the Vote had subcontracted Kavtech “to develop a web-based application” to review voter information and “to identify any potential voting-related frauds.” The inclusion of his email in the voter file message was the result of someone inputting the address as part of a request sent to an automated system, Butt claimed.

“That email was actually an automated response from Nevada Secretary of State Automated Report Generator system. Whoever requested the ‘Eligible Voters’ report from the system entered my email address in recipient list as well,” Butt said.

Engelbrecht disputed Butt’s claim. She told The Epoch Times on Dec. 28 that True the Vote has never subcontracted Kavtech.

True the Vote received the email in question on Nov. 29.

Kavtech Solutions Ltd. is based in Lahore, Punjab Province, in Pakistan, according to the letter.

The office of the Nevada secretary of state didn’t respond to a request for comment.

According to its website, Kavtech specializes in data management, including for government clients. The company has also provided facial recognition software to three airports, data visualization services to a handful of clients, and developed more than 500 games. The website doesn’t appear to include any references to work with the Pakistani military and intelligence, as alleged in the letter. The company didn’t immediately respond to a request for comment.

The Trump campaign filed an election contest in Nevada on Nov. 17. A judge in the case dismissed the lawsuit and the campaign plans an appeal to the state’s Supreme Court. The lawsuit alleged that tens of thousands of votes were illegally cast, enough to invalidate the results. In an evidentiary hearing, Trump campaign attorneys said they have a witness who said that vote totals were inexplicably changed on USB drives overnight.