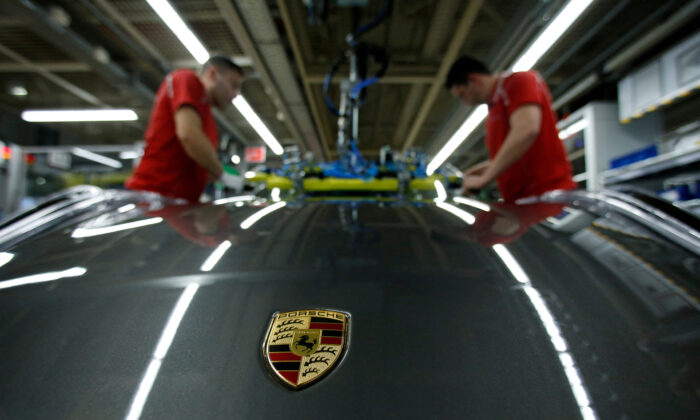 Employees of German car manufacturer Porsche install the windshield of a Porsche 911 at the Porsche factory in Stuttgart-Zuffenhausen, Germany, on Feb. 19, 2019. (Ralph Orlowski/Reuters)
Companies

HAMBURG/BERLIN—Volkswagen is targeting a valuation of up to 75 billion euros ($75.1 billion) for luxury sportscar maker Porsche, it said on Sunday, in what will be Germany’s second-largest initial public offering (IPO) in history.

Volkswagen will price preferred shares in the flotation of Porsche AG at 76.50 euros to 82.50 euros per share, the carmaker said, translating into a valuation of 70 billion to 75 billion euros.

At the upper end of the range, first reported by Reuters, it would become Europe’s third largest IPO on record, according to Refinitiv data. Trading will begin on the Frankfurt Stock Exchange on Sept. 29, Volkswagen said.

The sovereign wealth funds of Qatar, Abu Dhabi, and Norway as well as mutual fund company T. Rowe Price will subscribe up to 3.68 billion euros worth of preferred shares as cornerstone investors, at the upper end of the valuation, Volkswagen said.

“We are now in the home stretch with the IPO plans for Porsche and welcome the commitment of our cornerstone investors,” Volkswagen Chief Financial Officer and Chief Operating Officer Arno Antlitz said.

In line with Volkswagen’s agreement earlier in September with its largest shareholder Porsche SE , 25 percent plus one ordinary share in the sportscar brand, which do carry voting rights, will go to Porsche SE at the price of the preferred shares plus a 7.5 percent premium.

Porsche SE, the holding firm controlled by the Porsche and Piech families, will finance the acquisition of the ordinary shares with debt capital of up to 7.9 billion euros, it said in a separate statement.

Total proceeds from the sale will be 18.1 billion to 19.5 billion euros. If the IPO goes ahead, Volkswagen will call an extraordinary shareholder meeting in December where it will propose to pay 49 percent of total proceeds to shareholders in early 2023 as a special dividend.

A stock exchange prospectus is expected to be published on Monday, after which institutional and private investors can subscribe to Porsche shares.