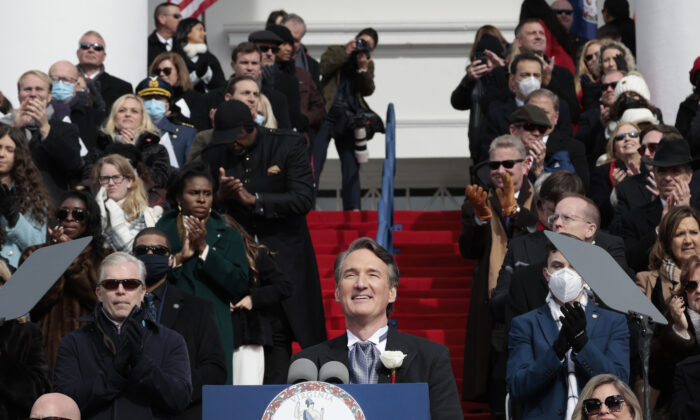 Virginia Governor Glenn Youngkin gives the inaugural address after being sworn in as the 74th governor of Virginia on the steps of the State Capitol in Richmond, Va., on Jan. 15, 2022. (Anna Moneymaker/Getty Images)
Regional News

RICHMOND, Va.—Glenn Youngkin, the first Republican to win the state of Virginia since 2009, was sworn in as the state’s 74th governor on Jan. 15.

Within hours of his inauguration, he signed 11 executive actions including lifting the mask mandate in Virginia schools and “ending divisive concepts, including critical race theory, in public education.”

He also signed an executive directive rescinding the vaccine mandate for all state employees.

The 55-year-old former business executive, in his inauguration speech at Richmond, emphasized a “common path forward” with “our deep and abiding respect for individual freedom.” Youngkin vowed to strengthen and renew the “spirit of Virginia” associated with the history of the state as the home of American democracy. He credited Virginians with the spirit of tenacity, grit, and resilience.

Youngkin said he was “ready to lead and serve, starting on day one,” and it would start in the classroom to get Virginia’s children “career and college ready.” The crowd of an estimated size of 6,000 burst into a loud cheer upon hearing from Youngkin that he would “remove politics from the classroom.”

“Virginia is open for business,” Youngkin promised to create 400,000 new jobs and 10,000 new startups in the four years of his administration by reducing regulations and increasing job-related training.

According to him, residents of the commonwealth will see the “largest tax rebate in Virginia’s history.” In addition, he promised to “fully fund” and “return respect to” law enforcement.

Voters echoed the sentiment of “hope” and “optimism” highlighted in Youngkin’s speech.

“I’m excited because we have somebody in here who’s willing to fight like we do, just on a higher level,” said Shirley Green, a public relations specialist, while waiting to join the inauguration ceremony. Improving the school system was the first step she wanted the new administration to take. And she was “optimistic” that the Youngkin administration would deliver their campaign promise because of their “humility” and “passion for Virginians.”

Green grew up as a Democrat in the District of Columbia metropolitan area but became a conservative 13 years ago. She said she had found the Democratic Party having a different vision than “working for the people.”

“I feel great. It’s a great day for Virginia,” said Joe. He and his wife attended the inauguration ceremony in “Youngkin vests,” the same style of fleece vests Youngkin often wore on his campaign trail. The couple owns a local safety business and prefers not to disclose their names. The previous Virginia administration “didn’t always take in consideration of the people” in its decision-making, said the wife.

“Education is the number one concern,” she said, adding that parents among their employees and employees at their client organizations—Republicans, independents, and Democrats—voted for Youngkin “because of their concerns for their families.”

Aiden Sheahan and Alyson Bucker with the University of Virginia were among a group of five college students and graduates who also attended the ceremony. They made phone calls and door-to-door visits for the Youngkin campaign. Sheahan said he saw “a lot of optimism” during the campaign; people had hopes that many things, including jobs, the standard of living, and policies, would change with the new governor.

The group described the new Lieutenant Governor Winsome Sears, a black American who immigrated from Jamaica, as “confident” and “powerful.”

“She doesn’t use her skin color, her circumstances, or her identity to promote herself. She used her accomplishments, rather than something she cannot control, to promote herself,” added Matthew Carpenter, a recent college graduate from Longwood University in Farmville, Virginia.

Challenges from Day One

The former executive who campaigned as a political outsider will face challenges working with a state legislature with divided party control, and some priorities facing deadlocks.

The General Assembly session began on Jan. 12, with a newly empowered Republican majority (52–48) in the State House, and a Senate where Democrats still hold a 21–19 majority.

In the next 60 days, lawmakers will review and adopt a two-year state budget proposed by former Governor Ralph Northam on Dec. 16. Youngkin has already said “the recognition of the need for tax cuts is understated” in Northam’s plan.

The new Speaker of the House Todd Gilbert announced education, inflation, and public safety as Virginia House GOP’s agenda for 2022. By comparison, House Democrats’ “top priority is to protect the advances they made against Republican efforts to roll them back,” in three key areas: supporting public schools, keeping families healthy, and ensuring economic security for all.

With a Democrat-controlled House and Senate in the past two years, former Democratic Governor Northam signed into law in 2020 a series of liberal measures, including increased gun control, lifting abortion restrictions, and relaxed voter requirements.

“I think we have a Governor-elect who is going to come in and do something about some of our school problems, introduce our freedoms, and be more protective of law enforcement. And I think that gives us a lot of hope,” veteran Republican State Senator Steve Newman told ABC13 a day before the inauguration.

An inaugural parade followed the ceremony. On Sunday, the three-day events will close with an open house at the governor’s mansion. Along with Youngkin, Winsome Sears was sworn in on Saturday as the Lieutenant Governor and Jason Miyares as the Attorney General. Sears will hold the tie-breaking vote in the State Senate.