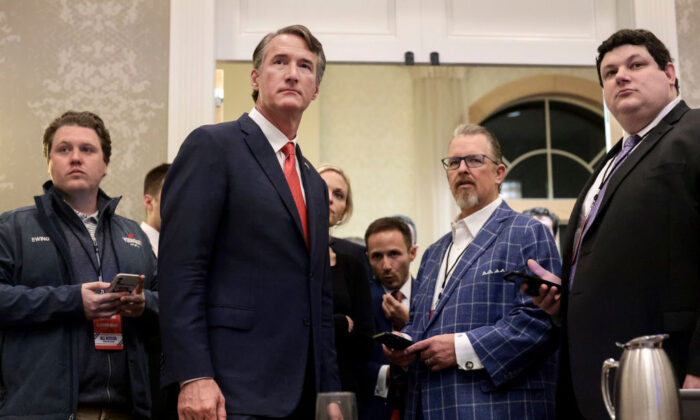 What We Can Learn From the Virginia Election

The recent American elections, especially in Virginia, turned out to be a referendum on President Joe Biden. Most issues were national ones which had a significant deleterious local impact.

These included inflation, massive and uncontrolled illegal immigration that brings the importation of serious health issues, a widespread increase in crime, and the rights of parents to know what was happening in the schools and express their opinions on this.

One newspaper in the Murdoch empire, The Australian, curiously concluded on Nov. 4 that Republican Glenn Youngkin winning the Virginian governorship, a Democrat stronghold, was a disaster for former President Donald Trump.

The reason? It demonstrated that a republican candidate could win on the “strength of a good campaign alone,” that is, without Trump.

But Trump did endorse Youngkin, with the sitting Democrat governor, Terry McAuliffe, campaigning on the theme that Youngkin was Trump’s puppet. This did not seem to worry voters. Indeed, it may well have encouraged some to vote for him.

It cannot be assumed that it is a discouragement when a candidate campaigns on Trump’s endorsement.

Take, for example, one of the special congressional elections in the 15th Congressional District in Ohio, where Republican candidate Mike Carey certainly did not hide the fact that Trump endorsed him.

Against a well-financed Democrat, he won by 17 percent, 3 percent more than the vote in the 2020 presidential election.

Trump’s endorsement clearly did him no harm. Indeed, it may well have contributed to increasing his margin.

And surely no one has ever doubted that politicians with a good record and excellent fresh candidates can always enjoy a strong personal vote.

This electoral result is unlikely to weaken either Trump’s dominance as the overwhelmingly preferred candidate among the Republican rank-and-file or his attraction to voters who have now had the opportunity of comparing his record with Joe Biden’s.

Few would have forgotten that Biden was presented as a safe pair of hands in the presidential election, the implication being he would not apply an extreme left agenda, which is precisely what he did.

Nor is it likely that many have forgotten the enormous lengths to which both mainstream and social media went to hide anything damaging to him.

This was most noticeable with the infamous Hunter Biden laptop affair.

This exposed reports of the activities of the Biden family in trading access and influence to foreign plutocrats, including Beijing’s, into the very heart of Washington, especially when he was vice president.

Indeed, polling has indicated that they would certainly not have voted for Biden had many voters known of what was disclosed in the laptop affair.

Informed electors seem well aware that, in comparison with Trump, in the crucial matters of international trade and defence, Biden has shown himself to be weak both in relation to hostile powers but also with regard to increasing the contribution made by America’s allies. His attempts to restore the nuclear deal with Iran could hardly be popular with most voters.

Biden’s determination to use vaccination to mandate behaviour through massive penalties goes against traditional American concepts of freedom, while his introduction of untested illegal immigrants is widely seen as a serious breach of prudential standards, which any administration is expected to adopt to protect Americans.

His rundown of defence, especially the departure from Afghanistan, has created a widespread sense of outrage and no doubt has contributed to his dramatic fall in the polls.

What has also proved unpopular is police defunding, the cost of climate change measures, and the fact that, as soon as he took office, he reversed Trump’s achievement in making America energy independent.

However, it is Biden’s handling of the economy which is causing probably the most significant concern. With his decision to reverse energy independence and his massive budgetary measures, serious inflation has re-emerged.

This has been reinforced by the Federal Reserve Bank continuing its large QE (Quantitative Easing or printing money to buy government bonds) just as Biden had allowed OPEC and Russia to push up the price of oil and gas in an administration which has no sense of budgetary restraint.

The flow-on impact on food prices and housing is leading to the likelihood that inflation could be over 6 percent this year.

Further, Biden is being blamed for reversing Trump’s ban on teaching Critical Race Theory (CRT) in the schools and in encouraging gender fluidity theory while condemning parents as domestic terrorists for opposing this on school boards.

In all this, there is an increasing mistrust of the mainstream and social media, who are seen as hiding the truth from the people in the presidential elections and concerning the Trump and Biden administrations.

There also seems to be a re-appraisal of the Trump term, which could significantly impact both the coming 2022 midterm elections and then the presidential election in 2024.

All of this has a broader impact, especially in the anglosphere and then the free world. There is a widespread fear after Afghanistan about the willingness and the ability of the United States to lead in defence and her ability under Biden to maintain her economic primacy.

An immediate impact of his domestic policies will be inflation which cannot be isolated to America. It has, for example, already emerged in Australia, where the Reserve Bank is likely to be forced to increase interest rates which will have a dramatic effect on the housing market.

Then there is the fact that much of the far-left Marxist theory, which is widespread in the United States, is spreading like a virus, especially into the English-speaking world. Already there are reports of CRT being taught in Australian schools.

A surprising result of this election is that neither the Democrats nor their propaganda arm, the mainstream media, have learned the obvious lesson—whatever their true belief, to drop their socialist agenda and to move to the centre.

Instead, as the Ben Ferguson podcast demonstrates, the mainstream media blame the loss on racist “domestic terrorists,” the libel they use to describe parents who dare protest about massive CRT and gendered propaganda in the schools.

They claim the Republican Virginia win was down to the party playing the racist card despite the Lieutenant Governorship having gone to a black immigrant woman.

This is the sure path to defeat in the midterm and presidential elections, which will be not only of American but of worldwide significance.