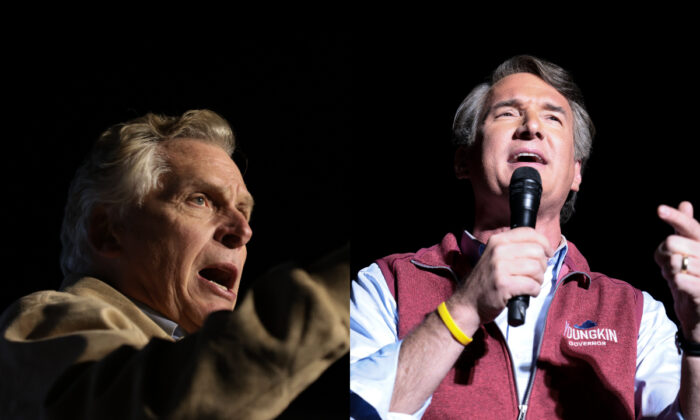 Virginians are heading to vote on Nov. 2 for their next governor.

Some 1.13 million voters submitted early ballots, nearly 20 percent of Virginians who can vote, according to TargetSmart.

About 53 percent of the ballots cast so far came from Democrats, with 30.9 percent from GOP voters and the rest from those unaffiliated with a party.

The early voting number soared from under 190,000 in the last gubernatorial election, when voters elected Democrat Ralph Northam.

Youngkin said on Fox News that he saw the early voting numbers as “very much representative of our strength.”

“Historically, early voting has been 75 to 80 percent Democrat. And so for us to be so strong in the early voting just reflects the fact that there’s not any enthusiasm on my opponent’s side. And we have had a lot of enthusiasm, and then we expect to do really well tomorrow,” he added.

“We are going to have the largest turnout in a non presidential year in the history of the Commonwealth of Virginia this year. Yeah, I got a big lead in the early vote. But that doesn’t mean anything. It’s tomorrow in person. We got to win that as well,” McAuliffe told a rally in Fairfax on the eve of the election.

During a rally in Loudoun County around the same time, Youngkin painted the election as “a defining moment for the future of our commonwealth, a defining moment where we get to say ‘no’ to this left-liberal progressive agenda that’s trying to take us over.”

Youngkin has drawn support from parents upset about a leftward lurch in school teachings and policies. In Loudoun, the school board earlier this year approved a pro-transgender policy that removes traditional gender restrictions on bathrooms.

McAuliffe has largely dismissed concerns about what’s being taught in schools. He appeared at the Fairfax rally with Randi Weingarten, president of the American Federation for Teachers union.

McAuliffe told the crowd that he wants to “build the best education” by improving the average teacher pay and get children access to broadband Internet so that they can learn online.

He noted that he and Youngkin differ on a number of policy proposals. McAuliffe, for example, supports widespread abortion access while Youngkin has advocated for pro-life policies.

Voters will also vote in other races, including for who will hold seats in the Virginia House of Representatives.