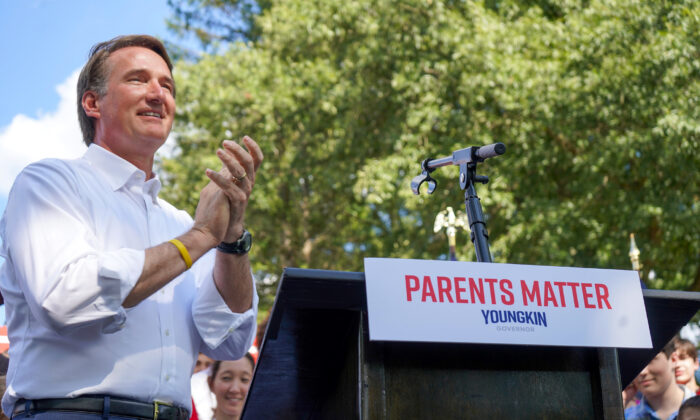 Virginia Gov. Glenn Youngkin at a "Back to School" rally in Annandale, Va., on Aug. 31, 2022. (Courtesy of Spirit of Virginia)
Education & Family News

According to the new guidelines, public schools cannot affirm a student’s gender without parents’ written requests. In addition, bathroom and locker room use is to be based on students’ sex, defined as the biological sex at birth. Student sports participation should be sex-based as well unless federal laws require otherwise.

The new policies are is a complete reversal of the previous guidelines, which define transgender as a student’s “self-identifying term.” Those rules, which took effect in March 2021 under former Democratic Gov. Ralph Northam, ask schools to consider not disclosing a student’s gender identity to the parents “if a student is not ready or able to safely share” it with their family.

The new policies have common ground with the previous rules with regard to ensuring a safe learning environment without bullying, discrimination, or harassment for students. It lists the First and 14th Amendments of the U.S. Constitution as primary evidence.

The new guidelines will enter a 30-day public comment period around Sept. 26 and take effect after the state superintendent approves the final version.

“The 2022 model policy posted delivers on the governor’s commitment to preserving parental rights and upholding the dignity and respect of all public school students,” Macaulay Porter, spokesperson for Republican Gov. Glenn Youngkin, said in a statement emailed to The Epoch Times.

“It is not under a school’s or the government’s purview to impose a set of particular ideological beliefs on all students. Key decisions rest, first and foremost, with the parents.

“The previous policies implemented under the Northam Administration did not uphold constitutional principles and parental rights, and will be replaced.”

Virginia Del. Marcus Simon (D-Fairfax), who introduced the state House bill that became a 2020 law and the basis of the 2021 rules, said in a tweet on Sept. 16: “These new policies are cruel and not at all evidence-based. … If enacted, these policies will harm Virginia children. Stop bullying kids to score political points.”

Loudoun County-based parental rights group Fight for Schools applauded the new policy. “Governor Youngkin promised to put parents back in charge of the care, upbringing, and education of their children. Today, he delivered—big time,” said Ian Prior, executive director of Fight for Schools, in a statement emailed to The Epoch Times.

He also had something to say to the school boards, especially his own in Loudoun County: “To the school boards in Virginia, such as the one in Loudoun County, you spent last year telling parents that they had to pass radical anti-parent, transgender policies to match the VDOE’s [Virginia Department of Education] model policy—now you will have to revise those policies based on the law and your own words. So get to work.”

Clint Thomas, a father to Loudoun County schoolchildren, echoed Fight for Schools’ sentiment. He has two daughters, both studying in Loudoun County Public Schools (LCPS). Caroline, the elder daughter, is a high school senior and was on the school’s soccer team.

He’s also a plaintiff in a lawsuit against LCPS administrators and school board members, filed by America First Legal (AFL), a nonprofit conservative legal group, on his and 10 other parents’ behalf. At the end of June, the defendants were sued for “promoting secret gender transitions” and “forcing children to change in locker rooms with members of the opposite sex,” according to AFL.

“Virginia is returning to a focus on parents’ rights in education with its 2022 revision to model policies,” Thomas told The Epoch Times. “It feels so good as a father of children in LCPS to know our state Department of Education is returning to sanity when it comes to the basic rights of girls and women in our schools and athletic competitions.”

It’s unclear whether school districts will face budgetary consequences if they don’t follow the requirements. Porter didn’t respond to a question by The Epoch Times about the potential ramifications of noncompliance.

CORRECTION: A previous version of this article misidentified the former governor of Virginia. The Epoch Times regrets the error.