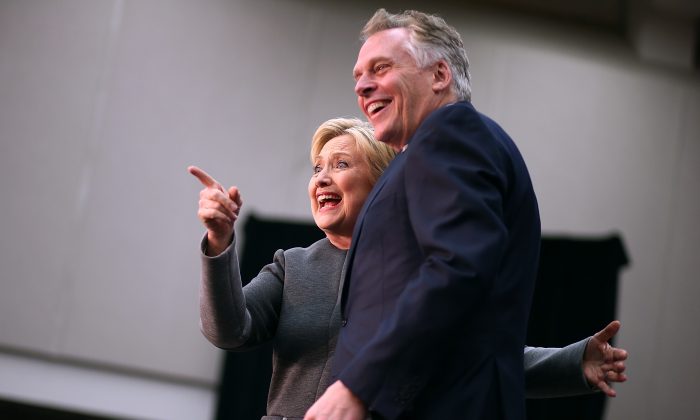 Virginia Democratic Governor Terry McAuliffe is the subject of an ongoing investigation by the FBI on whether donations to his gubernatorial campaign violated the law, an official said.

“The Governor will certainly cooperate with the government if he is contacted about it,” said Marc Elias, attorney for McAuliffe campaign, in a statement to CNN.

McAuliffe has not yet been contacted by the authorities, and has been unaware of the probe that’s been going on since at least last year.

The FBI is focusing their scrutiny on his dealings as a board member on the Clinton Global Initiative, a fundraising vehicle set up by former President Bill Clinton.

The CNN report continues, pointing to a particular donation that caught the attention of the investigators:

Among the McAuliffe donations that drew the interest of the investigators was $120,000 from a Chinese businessman, Wang Wenliang, through his U.S. businesses. Wang was previously delegate to China’s National People’s Congress, the country’s ceremonial legislature.

Mr. Wang has also contributed $2 million dollars to the Clinton Foundation along with sizable donations to colleges like NYU and Harvard.

U.S. election law prohibits foreign nationals from donating to federal, state or local elections. Penalties for violations include fines and/or imprisonment. However, Wang holds U.S. permanent resident status, according to a spokeswoman, which would make him eligible to donate to McAuliffe’s campaign.

“Neither the Governor nor his former campaign has knowledge of this matter, but as reported, contributions to the campaign from Mr. Wang were completely lawful,” said Elias.

The announcement of the FBI probe comes only one day after McAuliffe held a fundraiser for Hillary Clinton.

News of the McAuliffe probe comes one day after he held a high-dollar fundraiser for Hillary Clinton. https://t.co/eGAm8QKdUK (h/t @jeneps)

McAuliffe is the second Governor in a row to be investigated for corruption charges. He took office in 2014, after replacing former Virginia governor Bob McDonnell due to similar charges.

Bob McDonnell and his wife Maureen were convicted of 11 counts in 2014 by a federal jury that found that he violated the law when he received money and loans from Jonnie R. Williams, the CEO of a Virginia based company called Star Scientific.

According to court records, McDonnell “solicited and secretly accepted more than $175,000 in money and luxury goods …. The funds included loans, deluxe shopping trips, golf outings and a Rolex watch.”