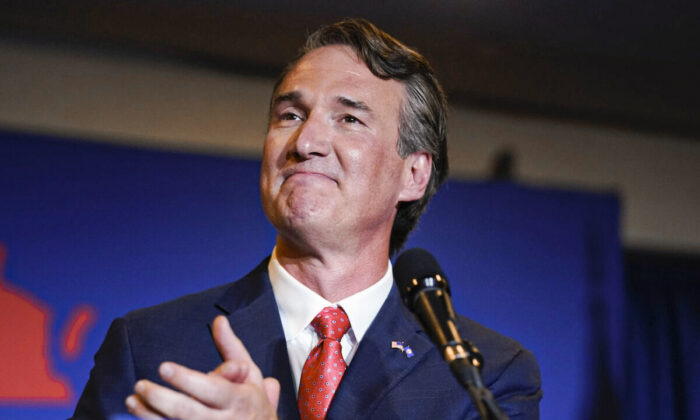 On his first day in office, Virginia Gov. Glenn Youngkin fulfilled his campaign promise by prohibiting public schools in the state from teaching critical race theory (CRT), which he described as an “inherently divisive” concept.

Youngkin, who was sworn in as governor on Jan. 15 in Richmond, signed nine executive orders and two executive directives to address some of his administration hot-button issues, with the first on the list aiming to end “the use of divisive concepts … in public education.”

“Inherently divisive concepts, like Critical Race Theory and its progeny, instruct students to only view life through the lens of race and presumes that some students are consciously or unconsciously racist, sexist, or oppressive, and that other students are victims. This denies our students the opportunity to gain important facts, core knowledge, formulate their own opinions, and to think for themselves,” the order states.

“Our children deserve far better from their education than to be told what to think.”

Specifically, the executive order tasks the state’s superintendent of instruction to review all policies, programs, academic standards, and curricula within the Education Department to determine whether they promote or endorse inherently divisive concepts such as CRT. The order also bans any executive employee from “directing or otherwise compelling students to personally affirm, adopt, or adhere to inherently divisive concepts.”

The order defines “divisive concepts” as ideas that would violate federal anti-discrimination laws, such as the idea that one race is inherently superior to another race, that anyone should be discriminated against or adversely treated because of his or her race; that anyone should bear responsibility for actions committed in the past by other members of the same race; or that one’s moral character is inherently determined by his or her race.

Youngkin has appointed two women to top leadership posts to enforce his order. Both appointees are known critics of progressive activism in K–12 schools and are advocates for giving parents more say in their children’s education.

Jillian Balow, who has been serving as Wyoming superintendent of instruction since 2015, resigned last week to accept Youngkin’s job offer as his school chief. In September 2021, she joined two Republican state senators to announce a bill (pdf) that would require schools to post online a list of all teaching materials they use.

“K–12 classrooms are not an appropriate forum for radical political theory such as CRT,” Balow said. “This bill empowers parents with tools they need to oversee what is being taught in their district and provides guidance to districts on comprehensive U.S. history and civics instruction.”

Elizabeth Schultz was named by Youngkin to be the next assistant superintendent. A senior fellow of the pro-parental rights group Parents Defending Education, Schultz has been active in combating the efforts to inject CRT into Fairfax and Loudoun County, the two largest counties in her state.

“Despite protestations of school boards in Fairfax and Loudoun that they are not ‘teaching’ it, there has been a comprehensive, deliberative, and manipulative effort of school staff and the school boards, underway for years,” Schultz wrote in an op-ed last year, pointing to a series of initiatives aimed to advance “equity” and social justice.

Meanwhile, the current version of the Virginia governor’s website no longer includes a page for chief diversity, equity, and inclusion (DEI) officer, a position held by Janice Underwood during the Northam administration.

The Epoch Times has reached out to the Youngkin administration to confirm whether the cabinet-level DEI office has been eliminated.