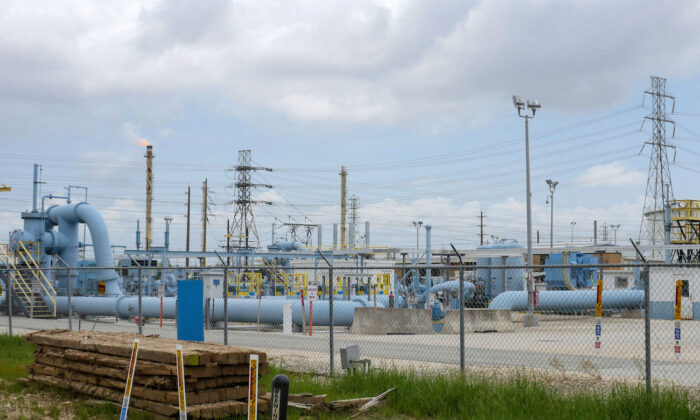 Image showing the Colonial Pipeline Houston Station facility in Pasadena, Texas, on May 10, 2021. (Francois Picard/AFP via Getty Images)
US News

The moves come after North Carolina Gov. Roy Cooper declared a state of emergency on Monday.

Gas stations in multiple states across the country began running dry and gasoline prices rose on Tuesday, after a fuel pipeline halted operations for days following the attack by hackers. Motorists have been panic buying since the May 7 ransomware attack, which effectively restricted access to computer systems while demanding payments to release them.

The Environmental Protection Agency on Tuesday issued temporary waivers of certain fuel standards to increase the supply of gasoline in areas whose reformulated gasoline has been impacted by the shutdown. In particular, it waived the federal Reid vapor pressure requirements for fuel sold in Reformulated Gasoline areas of District of Columbia, Maryland, Pennsylvania, and Virginia. The waiver will continue through May 18.

Meanwhile, the Department of Transportation’s Federal Motor Carrier Safety Administration had declared an emergency declaration for 17 states and Washington, D.C. on May 10 to allow flexibility for truckers to transport fuel.

Northam’s emergency declaration (pdf) will allow state agencies to relax state requirements or regulations to mitigate the impact of the shutdown. It also will provide more flexibility and funding for state and local governments to make sure there is adequate fuel supply, according to his office.

“This emergency declaration will help the Commonwealth prepare for any potential supply shortages and ensure Virginia motorists have access to fuel as we respond to this evolving situation,” Northam said in a statement. The order will be in effect for 30 days unless amended.

The 5,500-mile Colonial Pipeline, carrying gasoline and diesel from refineries in Texas, is the source of nearly half of the fuel supply on the U.S. East Coast.

The Biden administration projected that the pipeline would restart in a few days and urged drivers not to hoard.

DeSantis in Florida late Tuesday issued an emergency declaration (pdf) that activates the Florida National Guard as needed, as well as call on the director of the division of emergency management to work with local and federal officials to respond to the situation. The declaration also waives certain fuel transport requirements including weight and size restrictions on fuel trucks. It is in effect for 30 days.

“I think this is something that demands really serious federal attention. This was essentially a cyberattack on critical infrastructure in our country,” DeSantis said at a conference on Tuesday, reported WTSP. “You can’t just say it’s a private pipeline therefore, we’re not gonna be involved. No, the U.S. government needs to be involved. They need to help mitigate this.”

In Georgia, Gov. Brian Kemp declared a state of emergency (pdf) which temporarily suspends state sales tax on gas through the end of May 15, among other actions.

“My office has been in close contact with company and industry officials since we first learned of the Colonial cyber attack over the weekend,” Kemp said in a news release. “We are taking action to relieve some of the cost burden from Georgians as Colonial recovers by suspending fuel taxes, increasing the weight limit for supply trucks, and prohibiting price gouging.”

Florida Agriculture Commissioner Nikki Fried on Monday told residents not to panic-buy or hoard gas. She said in a statement that Floridians may expect some “fuel pricing and sales issues” over the coming days due to several factors including the temporary shutdown of a major fuel pipeline due to the cyberattack. This will mean fuel would need to be trucked in to certain regions amid a shortage of truck drivers, she added.

AAA Gas Prices, a website that monitors gas prices, said Florida should remain well supplied with gasoline, despite the pipeline outage, because the state is not largely dependent on the Colonial Pipeline for gasoline. But Mark Jenkins, a spokesman for the organization, said gas prices remain vulnerable to the volatility of price changes.

As of May 10, the national gas price average jumped six cents to $2.96. AAA said that if the trend continues, an increase of three more cents would mean the national average is the most expensive since November 2014, when average prices were at $2.99 and higher.