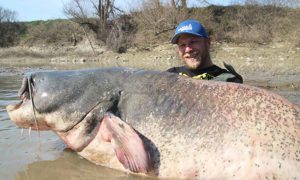 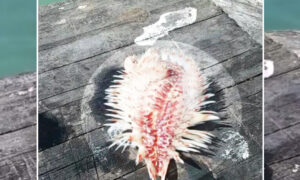 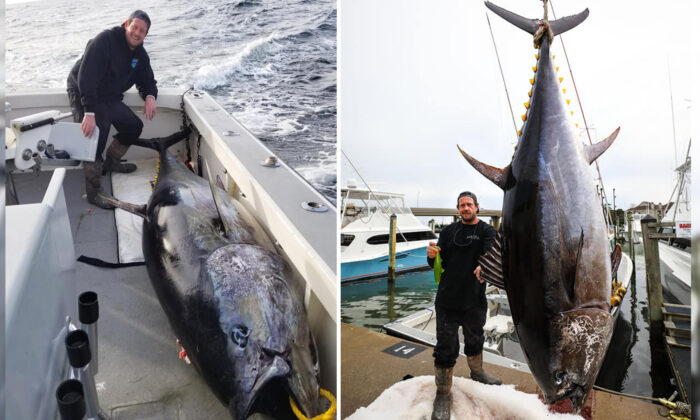 Virginia fishing charter captain Jake Hiles and mate Jeff Landis set out to catch a record bluefin tuna fish in mid-February, and what they brought back to show for it was momentously proven on the scale.

Their giant catch weighed in at a whopping 708 pounds (approx. 321 kg), shattering the state’s previous record for bluefins, 606 pounds (approx. 275 kg), set by Hiles’s mentor Chase Robinson in 2015. The catch took a grueling 53 minutes to reel in and left Hiles and Landis battered and bruised but thrilled by the size of the fish.

“I sat there and thought about Chase for a few minutes, thanked God first and Chase second for watching over me, for giving us such a beautiful morning, and giving me that fish,” he wrote in a post on Facebook.

708# *PENDING Virginia State Record Bluefin Tuna caught by Matador Charters: This is going to be lengthy, I wanted to…

Incredibly, before hauling in the giant tuna, Hiles and Landis unintentionally got tangled up with a 100-plus-pound (approx. 45-kilogram) mako shark and then an adult bottlenose dolphin, both of which they were able to release unharmed.

They briefly managed to get a giant tuna measuring 110 inches (9.1 feet) before it collided with the boat’s propeller and fell to the ocean depths. As good fishermen, they were prepared for the possibility that the trip might not yield the results they had hoped for.

Then, Landis struck pay dirt at 4:17 a.m., and it was apparent from the beginning that it was going to be a big one. “There was so much drag on the fish that it took all the strength I had just to get the rod out of the rod holder so I could get strapped to the rod and settled into the chair for the fight,” Hiles wrote.

I present to you the new *pending* Virginia State Record Bluefin Tuna at 109" and 708#.Caught aboard Toro out of Rudee…

Landis nearly ran out of line fighting the giant tuna after the fish dove deep. “After 6 or 7 minutes of steady losing line straight down, after losing nearly a mile of line,” he explained. “I was able to stop the fish with about 100 feet of line remaining on the reel.”

Finessing the line, Landis had to be careful to pull just enough. “I broke his will without breaking him off and now I had a still very angry fish, a very long ways away,” he said. Then, he finally managed to bring the fish up to the surface, though the anglers couldn’t evaluate the tuna’s size until dawn.

“In the sunlight, I think we both knew how big of a chore getting that fish through the tuna door was going to be,” Landis shared. They eventually pulled it up over the side and upon measuring it realized that they had probably set a record. The bluefin measured 109 inches, 9 feet long, a full 6 inches longer than the previous record.

By the time they reached the dock, word had spread about the monstrous catch. Along with a crowd of anglers and well-wishers, members of the state fishing commission were there to witness the measuring and weighing to verify the catch. “With this being a state record,” Landis explained, “it means that the fish was captured recreationally and laws say that any recreationally caught fish cannot be sold commercially.”

As such a massive amount of tuna wouldn’t stay fresh long, Landish decided to give away the sushi-grade fish to interested members of the public. He posted an invitation on social media for them to claim their free fish, and the response was enthusiastic. “I was very happy and excited to see the fish put to such great use and see everyone get a little enjoyment out of my fish so the animal was not wasted,” he shared online.

After the amazing battle, Landis went home for a much-deserved shower and rest. He dedicated his record catch to his late friend, who also was the former record holder, Chase Robinson.