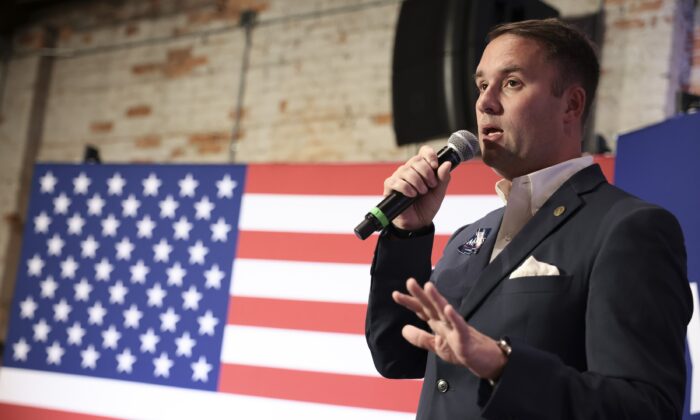 Jason Miyares, who later won the election for Virginia attorney general and was sworn into office, speaks to a rally in a file photograph. (Anna Moneymaker/Getty Images)
Election Integrity

Virginia’s Republican attorney general, Jason Miyares, announced on Sept. 9 the formation of an “Election Integrity Unit” within his office that will ensure “legality and purity” in the election process by working with law enforcement, the Department of Elections, the State Board, and the broader community.

“I pledged during the 2021 campaign to work to increase transparency and strengthen confidence in our state elections,” said Miyares in a press release on Friday. “It should be easy to vote, and hard to cheat. The Election Integrity Unit will work to help to restore confidence in our democratic process in the Commonwealth.”

Headed by Miyares, the unit will have more than 20 attorneys, investigators, and paralegals from across the various divisions of the AG’s office. They are expected to monitor processes across Virginia’s 133 local electoral boards and general registrars and the bipartisan State Board of Elections starting with the upcoming midterms. Early voting begins in the state on Sept. 17, 2022.

The Republican Party of Virginia voiced its support for the unit, and said that the AG’s “bold initiative will increase transparency in our elections, restore confidence in our democratic process, and better ensure that every vote is counted in accordance with the law.”

“At the same time, Democrats in the state senate have blocked common-sense election integrity measures like voter ID,” it added.

The Epoch Times has reached out to the office of Virginia Democrats.

“With the creation of this unit, Attorney General Miyares has fully embraced Trump’s ‘Big Lie’ and the far-right fringes of the Republican party,” said Democratic Party of Virginia spokesman Gianni Snidle, according to Virginia Mercury.

The statement from the Virginia GOP included the news of a former election official who has been prosecuted by Miyares for election fraud. “Just this week, we saw the need for stronger protections for our elections system when a former top Prince William County election official was indicted on fraud charges related to the 2020 election,” said the GOP.

The official, Michele White, was indicted last week for three felonies, according to documents reviewed by The Epoch Times. Based on the grand jury charge, White engaged in corrupt conduct between Aug. 1 and Dec. 31, 2020, and is accused of making a false statement regarding the election and neglecting her duty as an election officer. She faces 21 years in prison if convicted of all charges.

Media companies like Democracy Docket and the Washington Post discounted the formation of the unit, and wrote similar tweets voicing their opinions on the 2020 election.

“Virginia Attorney General Jason Miyares (R) announces new Election Integrity Unit to investigate and prosecute election law violations. Election crimes are not a widespread problem in Virginia, or anywhere in the U.S.,” said Democracy Docket in a tweet on Friday.

Meanwhile, the Washington Post said, “Virginia’s Republican Attorney General Jason Miyares announced the creation of an ‘Election Integrity Unit’ that will provide legal advice and prosecute election law violations. The state, however, has not seen significant issues with voter fraud.”

According to a 100-point election integrity system developed by the Heritage Foundation, some states have improved their scores ahead of the upcoming midterms. The system takes into consideration the accuracy of voter lists, which is valued at 30 points; absentee ballot management with 21 points; and voter ID usage assigned at 20 points.

After making effective improvements in verifying voter roll accuracy, Tennessee earned the top spot while Virginia went up three points. Virginia is one of the 14 states that has improved its ranking.