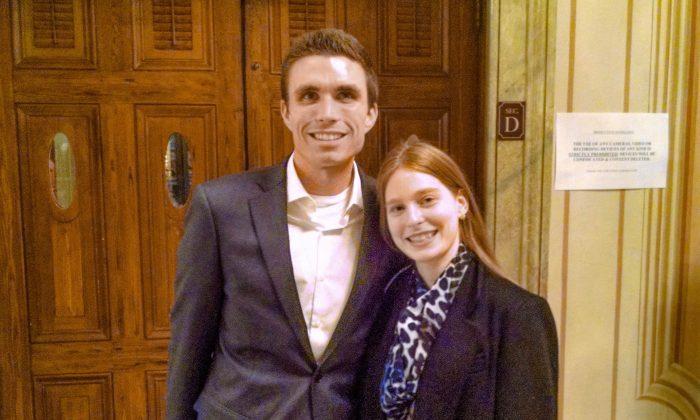 Mike Coleman and his wife, Sarah Coleman, attend Shen Yun at the Academy of Music, in Philadelphia, on Jan. 9, 2016. (Epoch Times)

PHILADELPHIA—Mrs. Sarah Coleman is a classically trained violinist. “The music was phenomenal,” she said, at Shen Yun on January 9. She said the dancers and musicians she saw at the Academy of Music “are really talented.”

It was flawless.
— Mike Coleman

Mrs. Coleman formerly played violin in an orchestra. Her husband, Mike Coleman, has practiced Kung Fu and Taekwondo for 20 years, he said. He appreciated the aerial techniques in classical Chinese dance. “It was flawless,” he said.

According to the Shen Yun website, “All these jumping, turning, and flipping techniques, along with the exquisiteness of the bearing and form, give classical Chinese dance special expressivity. It is able to transcend ethnic, cultural, and even linguistic barriers, taking this well-established Chinese culture and presenting its essence to the world.”

By having a Western orchestra play the foundation with traditional Chinese instruments leading the melodies, Shen Yun Performing Arts Orchestra is able to seamlessly harmonize the musical traditions of East and West to create a unique sound, according to the Shen Yun website.

Mrs. Fay found the performance graceful and enjoyable, and said she would encourage her friends to watch Shen Yun.

“It’s very different from our Western shows that we’ve seen. I’ve never seen anything like it,” she said.

“You’d have to experience it,” he said.