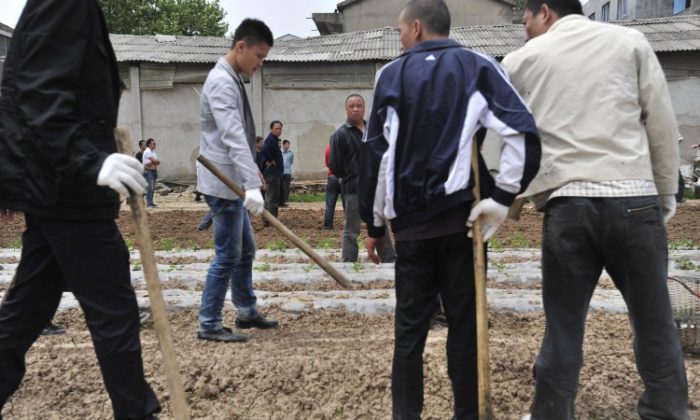 Chinese men carry sticks as they stand guard while workers demolish houses which are claimed illegal by local government in Wuhan, central China's Hubei province on May 7, 2010. (STR/AFP/Getty Images)
China

Violent, Forced Evictions in China on the Rise: Report

Local officials in the Chinese Communist Party have violently and forcefully evicted people from their homes and property before seizing them in an attempt to make up for local budget shortfalls, according to a report from Amnesty International.

In the past two years, forced evictions to clear the way for commercial developments in China have been on the upswing, the London-based human rights organization said on Thursday.

“Local governments have borrowed huge sums from state banks to finance stimulus projects and now rely on land sales to cover the payments,” giving them a reason to evict locals, the group said. Both urban and rural dwellers have been targeted.

The practice has resulted in deaths, harassment, beatings, imprisonment, and other rights violations of Chinese citizens, the group said.

Of the 40 forced evictions it examined, Amnesty said nine resulted in the deaths of people who were protesting against them. For example, a 70-year-old woman, Wang Cuiyan, was buried alive by an excavator in March 2010 when a crew came to destroy her home in the city of Wuhan.

Some people, facing such pressure, have even set themselves on fire in protest, the group added.

In a recent example, a home belonging to a Uyghur family in the northwestern Xinjiang region was bulldozed and their land taken after the family rejected what they saw as inadequate compensation from local authorities. Radio Free Asia reported on Friday that the family petitioned for more than three years against the plans.

“We asked them to appraise our house fairly, but they did not listen and simply bulldozed our home,” Rebiya Yusup, whose family home was destroyed, told the broadcaster. She later broke off contact and might have been detained by police, RFA said.

At the same time, the Chinese Communist Party is enabling local officials to carry out the evictions by promoting them because they were able to achieve economic growth, even if by an any-means-possible approach, Amnesty said.

“There needs to be an end to the political incentives, tax gains and career advancements that encourage local officials to continue with such illegal practices,” said Nicola Duckworth, a senior researcher with Amnesty, in a statement. Duckworth called on the Chinese regime to put an end to the evictions.

Authorities usually do not consult with the local residents, nor provide housing for them, as required by international law. Compensation is also often inadequate, while cadres stand to make a killing by quickly selling the property on to real estate developers.

Amnesty cited an example of this, saying that in 2011, police in a village in Jiangsu Province attacked farmers to force them from their land. Approximately 20 women from the village were then taken away and beaten.