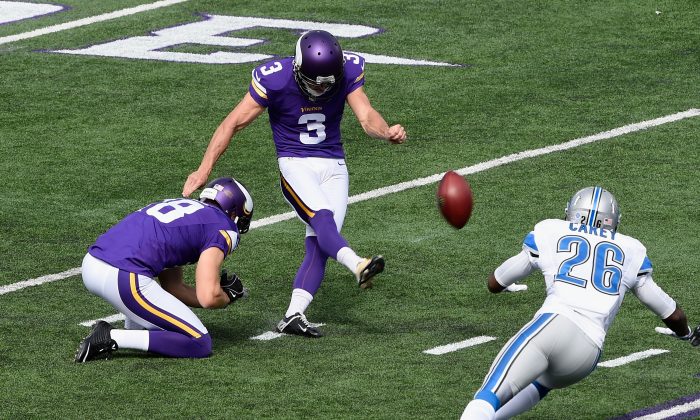 Jeff Locke #18 of the Minnesota Vikings holds the ball as teammate Blair Walsh #3 kicks the extra point against Don Carey #26 of the Detroit Lions during the first quarter of the game on September 20, 2015 at TCF Bank Stadium in Minneapolis, Minnesota. (Photo by Hannah Foslien/Getty Images)
NFL

Jeff Locke, the punter and holder for the Minnesota Vikings, was slammed on social media after a missed field goal that cost the Vikings the game.

In the waning seconds of the Vikings playoff game against the Seattle Seahawks, Minnesota kicker Blair Walsh had to make a relatively easy, 27-yard field goal to put the Vikings ahead by 2 points, which would essentially seal the game.

Locke held the football with the laces facing Walsh—generally considered a big no-no. Walsh then shanked it in a play that will forever live in NFL infamy.

For his part, Walsh blamed the miss on himself because, as he put it, he “just didn’t put a swing on it that’s acceptable by anybody’s standards,” according to a report from NBC Sports. “I’ll be working hard to erase that from my career but it’ll take a while. It’s just ridiculous. You’ve got to do better than that,” he added.

SB Nation noted that Walsh actually made at least one laces-in field goal earlier in the game. “Holder Jeff Locke elected to wear gloves that prevented him from placing the ball laces out, which is what kickers prefer.

As a result, people immediately recalled “Ace Ventura: Pet Detective,” and Locke was likened to Dan Marino. In the movie, villain and ex-kicker Ray Finkle is obsessed with holding the ball “laces out,” which cost his team—the Dolphins—the Super Bowl.

Following Locke’s gaffe, it was all too easy for Facebook and Twitter users to go after him. “Laces out, Jeff” or “laces out, Locke” were several refrains.

Where @Vikings P Jeff Locke will be spending his summer: pic.twitter.com/cV8oQyGiiI

Some also compared Walsh’s miss to Buffalo Bills kicker Scott Norwood, who hooked a short field goal “wide right” during Super Bowl XXV, which cost Buffalo the game (Norwood’s miss was a much bigger deal, and will likely remain so throughout NFL history, since it was just a miss on his part and had nothing to do with the holder).

On a more serious note, some apparent Vikings fans (and people who bet money on Minnesota) also issued death threats against Locke and Walsh, even though Walsh accounted for all of Minnesota’s 9 points.

The Seahawks won 10-9 and will play the Carolina Panthers in North Carolina next week.