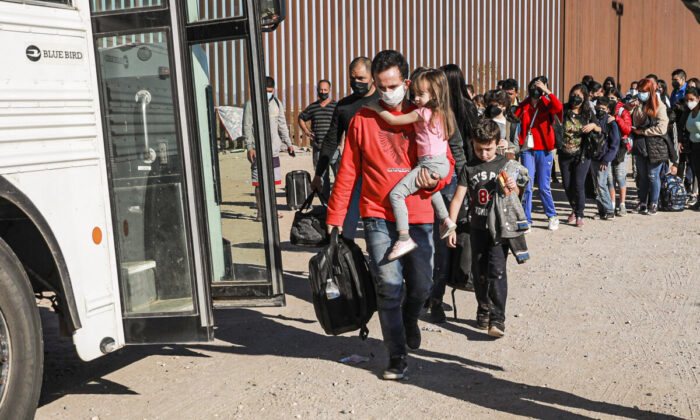 Illegal immigrants who have gathered by the border wall prepare to board a bus going to to the Border Patrol station for processing in Yuma, Ariz., on Dec. 10 2021. (Charlotte Cuthbertson/The Epoch Times)
By Katabella Roberts

The 51-minutes long bodycam footage was obtained through a Freedom of Information Act request by former Westchester County Executive Rob Astorino and published by The New York Post.

It shows migrants, including men, women, and children, being flown by the federal government under the cover of darkness from the southern border to White Plains, New York before being transported onto other parts of the United States via American Dream charter busses on Aug. 31, 2021.

Throughout the footage, police Sgt. Michael Hamborsky, who is wearing the body camera, appears confused and can be heard questioning federal contractors who are overseeing the migrant transfers about what exactly is going on.

In the background, a Boeing 737 which flew in from Fort Bliss in El Paso, Texas, several hours earlier, can be seen.

Hamborsky questions a number of the contractors before finally ascertaining that there are 142 people on board the flight who had been released after illegally crossing the southern border.

The contractors at the scene, some of which had reportedly acted as chaperones on the flight, are employed by MVM Inc., a private security firm that signed a $136 million contract with the federal government last year, the NY Post reports.

“You’re on a secure facility here. We really don’t know anything, and we’re in charge of security,” Hamborsky can be heard telling one of the federal contractors after questioning him about who was on the flight and what exactly the workers are doing.

“This is anti all our security stuff,” Hamborsky said. “I’m just trying to figure out what’s what, who’s who and how I’m supposed to keep this secure,” Hamborsky told the contractors as he continued asking questions.

Later, one contractor tells Hamborsky that they are not allowed to have their picture taken on base when he asks to see his photo I.D.

“Un-expletive-believable,” Hamborsky responded. “And who’s that by? DHS [Department of Homeland Security]?”

“Yes, and the United States Army,” the contractor responded. “You’re on a federal installation but DHS wants everything on the down-low.”

Another contractor told Hamborsky that he was not allowed to show his ID, explaining: “Like I said, everything is supposed to be hush hush.”

Hamborsky also asked one contractor why they were coming to suburban Westchester, which is about 35 miles outside of New York City.

“You don’t want to be in somewhere the spotlight is,” the contractor replied. “You want to try and be as down low as possible. A lot of this is just down-low stuff that we don’t tell people because what we don’t want to do is attract attention. We don’t want the media. Like we don’t even know where we’re going when they tell us.”

One of the contractors told the officer later in the video: “I get the whole secrecy and all that [expletive] but this is even above my [expletive] pay grade . . . the [expletive], you know what I mean?”

“And why? You know why?” Hamborsky asked.

“You know why, look who’s in office. That’s why, come on,” the contractor said. “You know why. Because if this gets out, the government is betraying the American people.”

“The government is betraying the American people,” a contractor also tells Hamborsky in the video.

President Joe Biden has repeatedly come under fire for his handling of the illegal immigration crisis at the U.S.–Mexico border after hundreds and thousands of immigrants flocked to the border in an attempt to enter the country.

In January last year, Biden hit the pause button on deportations, the Remain in Mexico program, and border wall construction, repurposed Immigration and Customs Enforcement priorities, and reversed the ban on travel from terror-prone countries.

According to Customs and Border Protection (CBP) statistics, there have almost been 1.6 million illegal aliens apprehended during the fiscal year 2021. When migrants stopped at the border are included, the number comes to 2 million.

The president has defended his actions and said his administration will not turn away unaccompanied migrant children at the border.

But Astorino, who is is currently running for governor of New York, told Fox News’ Tucker Carlson that the new video footage shows that it is not just unaccompanied kids arriving.

“Now they keep saying ‘it’s just unaccompanied kids.’ Completely a lie. And that these kids were not going to go into our own area. Completely a lie. [They’re being put] into schools in Westchester, Long Island, the surrounding suburbs. So it is a complete breakdown of our system. It is a betrayal, as that gentleman said, a betrayal to the American people,” Astorino said.

“We have a government that continues to lie to us, that has failed in its most essential duty to secure our nation’s borders, and uphold the rule of law. When we first found out about these flights, we were attacked for demanding simple answers. They kept lying and deflecting, but this is a matter of public safety, public health, and the people’s right to know,” he added.