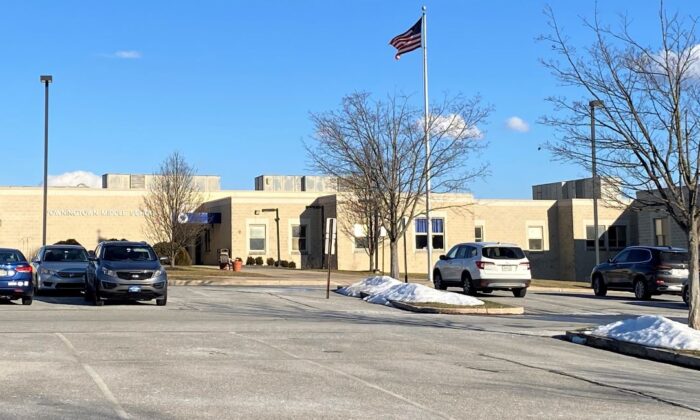 Tensions boiled over Wednesday at a Downingtown Area School District board meeting when a district employee, guarding the door to prevent the unmasked from entering, got into a physical altercation with a parent.

The Chester County Pennsylvania school district requires everyone attending the meeting to wear a mask. The rule is enforced with guards at the door, guards in the meeting, and police on speed dial.

In early December, the state Supreme Court ruled that the state Department of Health, no longer working under an emergency order, did not have the authority to continue requiring schools to mask students. At that point, school boards could decide individually if they wanted to require masking. Many opted to end masking immediately, or make it optional, but Downingtown continues requiring masking and parents have been attending meetings for months, asking for them to change the rule.

Nathan Laing, father of two, had a scarf wrapped around his head twice. It covered his mouth and nose. He figured that would be sufficient since the Department of Education website says an acceptable face covering can be made of a variety of synthetic or natural fibers including cotton, silk, or linen; that it may be secured to the head with ties, straps, loops over the ears, or is wrapped around the lower face; and it can be a scarf, bandana, T-shirt, sweatshirt, or towel.

When he approached the door, Laing noticed another parent, Shannon Grady, arguing with the school employee about entering the meeting.

“Are you wearing a mask?” a video shows the school employee asking Grady while the employee stands in the middle of the doorway.

“Then, you cannot come in,” the employee said.

Maskless mom Shannon Grady is prevented from getting into the Downingtown Area School District board meeting in Pennsylvania. Parent Nathan Laing and a school employee get into an altercation over mask style. (Courtesy of Grady Magrogan)

Laing pulled the door open wider to get around and inside, and a shoving match erupted.

In independent interviews, both Grady and Laing told The Epoch Times that the employee started shoving first. The school solicitor did not respond to requests for comment.

“I took one small step, and he grabbed my arm, and then he was sort of shoving me. I pushed him back and then he was trying to punch me. I pushed back again and said, ‘Don’t touch me’,” Laing said. Then the employee pulled the door shut, locked it, and called the police.

Laing said he intended to go in with his scarf on, and if anyone gave him trouble about it, he would have grabbed one of the free masks located inside two sets of doors behind the security guard. He had planned a two-minute speech during public comment, asking the board to end masking. But he was too distracted after the shoving incident, so he didn’t speak at all.

Parent Nathan Laing and a school employee get into an altercation over type of mask at the Downingtown Area School District board meeting in Pennsylvania, Feb. 9, 2022. (Courtesy Rachel Marinelli)

“Do people realize that right now we are starting, like Germany or China activities? This shouldn’t be happening. That man at the door, I don’t know his life or anything, but I’m sure he’s a normal person. It shows that normal people can be subverted into thinking they are doing good,” Laing said. “I hope this wakes people up to show them how close we are to becoming Germany. It’s kind of scary. I never thought that would happen to me just trying to attend the school board meeting on children.”

While Laing got into the meeting, Grady was not allowed in, because she would not wear a mask.

Grady filed a lawsuit against the school district in December and intended to serve papers to the board at the meeting, calling for the removal of board members who voted to keep the mask mandate in place.

Some parents attended the meeting to ask for the end of masking, others begged the board to continue masking.

Melanie Lewis, mother of four, walked into the meeting without a mask and sat maskless for the entire meeting, then stood for public comment. Each speaker is allowed two minutes.

“I told them they were basically child-abusing evil animals and that they deserve to be publicly shamed and called out,” Lewis told The Epoch Times. “We’re really just dealing with evil at this point because the kind of people that are OK with children being choked and not getting enough air are the hell dancers, there’s just no other way to put that. They’re evil animals—they’re getting off on it, basically.”

When her two minutes were up, she was told she was now a disturbance and told to leave the building.

“They’re not this doing for children’s health,” Lewis said. “They’re doing it for the teacher unions and control, because who are they without COVID? With COVID, they have importance in the community. Who are they if this all drops? They go back to their boring lives of being nobody.”

The Epoch Times asked district solicitor Guy Donatelli to point to the law giving the school authority to enforce masking children and citizens, but he did not respond to the request.