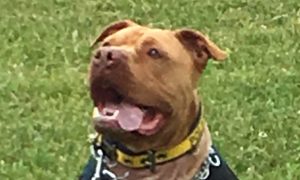 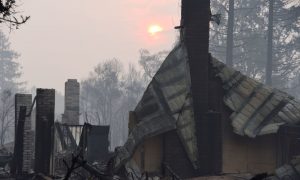 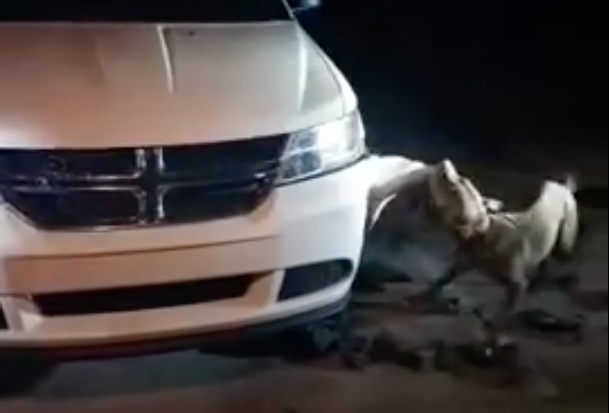 A pit bull named Red tears apart a car in Dalton, Georgia, on Nov. 9, 2017. (Screenshot via Youtube/Jessica DiLallo)
US News

A video of a pit bull pulling apart a car while a police officer tries to explain to the owner that he cannot shoot it has created a storm of comments both for and against the dog and the car owner.

Jessica DiLallo of Dalton, Georgia, called the police on Nov. 9 when she saw a dog viciously attacking her brand-new car that was parked in her driveway.

DiLallo said the destructive canine was trying to catch a pair of cats that were hiding under the hood of the car.

Concerned for the car and the cats, DiLallo was glad when Dalton Police Lt. Matthew Locke arrived on the scene. But she grew increasingly outraged as the officer stood by and watched the dog destroy her car.

The video has been viewed widely on YouTube and Facebook, and comments have piled up, most of them aimed at DiLallo.

“I’m like the most hated person right now because I said I wanted to shoot the dog, but I still stand by that,” DiLallo told Wesh News. “We weren’t sure if it was rabid, but it was foaming at the mouth, there was blood everywhere.”

“Some of the messages say they’re going to come find me and shoot me, telling me if I can’t afford a $500 deductible and I have a new car, then I’m living beyond my means, and that I’m white trash,” DiLallo told WRCB-TV.  “It’s insane.”

Have you seen this? Woman says Dalton police didn't do enough to stop a dog from attacking her car. Hear from her & police at 6. https://t.co/Q9HUWS5BuJ

After Locke refuses to shoot the dog, DiLallo asks him sarcastically: “So when he finally gets to whatever he is going to, we get to watch him destroy that as well? The cat gets to die too? Along with my car?”

“We got a catchpole coming. He’s already damaged your car to the point the front bumper’s going to have to be replaced,” Locke replied.

“So let’s just keep letting him go,” DiLallo responds.”The bumper was not off 10 minutes ago. You can’t throw a rock at him? You can’t do anything?”

“Okay, if I throw a rock at him, if I hit him with a stick, he’s going to turn, he’s liable to run, go after somebody else,” Locke says.

“Oh, so if he could go after somebody else, you don’t think that you should shoot him?” DiLallo responds.

DiLallo asks the officer if she went out and got a gun, if she could she legally shoot the dog. “It’s my property that he’s destroying,” she said.

Locke said that because they were in an apartment complex, discharging a firearm would be unsafe as well as illegal for a private citizen.

DiLallo responded, “Maybe we stop talking and we get the dog off my car?”

Locke suggested that DiLallo go inside. “Oh, but he’s not aggressive towards people, you said,” DiLallo quips. “I should probably bring my dog out here, I should have nothing to fear.”

A few seconds later another squad car pulled up, containing an officer with a catchpole. While the officers caught the dog, DiLallo commented, “Wonderful, helpful police department.”

Outpourings of Both Hate and Support

Some commenters on the video thought DiLallo should have tried to lure the dog away from the car instead of threatening to shoot it or doing nothing. Others thought more aggressive action should have been taken.

“i dont understand, hes not aggressive towards people and you have a dog……how about getting him a treat and trying to distract/ play with him to get him away from your car?? your a dog owner and cant get a dogs attention..? nah lets just shoot him…lol YAY for common sense and reasoning! all aboard the fail rail WOOT WOOT,” one commenter on the YouTube video said.

“You didn’t think of calling it over with food?? Your first thought is shoot or throw rocks??? Really?????” another wrote.

“If he’s not aggressive toward people then the officer should grab him off your car,” commented another.

“If he’s not aggressive towards people then grab a leash and pull him away until animal control gets there,” wrote a commenter on Facebook. “Quit being afraid of an animal that has no intentions of harming anyone, standing there watching the dog tear off a bumper debating weather to shoot it just means something is wrong with humanity.”

“He is most likely only 6 to 8 months old and still a puppy,” wrote another on the same video. “By watching his body language which include his ears and tail he was in playful mode not anger mode and no in no way should he have been shot. You should be shot just for saying that.”

Others sided with DiLallo, saying she was right to choose her car over the dog.

“Do something to the dog. What would you do if it was a human just stand there and not do anything. I stand with Jessica. Maybe not shoot at first but I would do some other stuff first then shoot as last resort,” another said.

“I wouldn’t have called the cops, the dog would just be dead,” another commented.

The dog, named “Red,” belongs to Ben Bonds. He received Red as a Father’s Day gift a year ago. “My son thought he was going to die and I took care of him, got him [to] where he [is] at now,” Bonds told WRCB-TV.

“I have great grandkids and grandkids they play with him and my little great granddaughter hugs him and plays with him, so he’s not a mean dog. He loves people,” Bonds added.

Bonds said he and his family were at a funeral and had left Red in a fenced-in enclosure from which he had never previously escaped. He also said this was the first time Red had run off.

Bonds said he would pay for the damage Red had done, which totaled $2,000, according to WRCB-TV. He also said that from now on, he would keep the dog on a chain as well as in the pen.

The Dalton Police gave Bonds a warning and told him to keep a close eye on his dog.

Would you have killed the dog to save your car? Do you think life is worth more than property? Post your comments below.

If you found this article interesting, please consider sharing it with your friends.