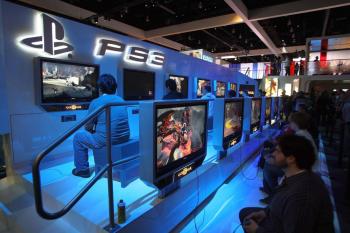 Showgoers try out games at the PlayStation 3 exhibit at the 2009 E3 Expo on June 3, 2009 in Los Angeles, California. (David McNew/Getty Images)
Business & Economy

Antonio Perez
View profile
Follow
biggersmaller
Print
NEW YORK—During the recession, U.S. consumers have cut back on personal spending on many fronts, and personal entertainment was no different. The 2009 U.S. retail sales of video games saw an 8.6 percent decline over 2008.

Total sales were $20.2 billion in 2009, which includes portable and console video game hardware, software, and accessories. That is an 8.6 percent decline from sales of $22.1 billion in 2008. The figures were released in a recent report by the NPD Group, a leading market research company.

Sales of PC video game software were down a staggering 23 percent, coming in at $538 million for 2009.

“Clearly, 2009 was a tough year for consumers and the national economy,” said Michael D. Gallagher, president of the Entertainment Software Association, in a statement. “However, the bigger picture is one that underscores the industry’s strength; 2009 and 2008 were the highest grossing years in our industry’s history. That said, our industry’s structure is solid, and I anticipate a strong 2010 with a pipeline full of highly-anticipated titles.”

The top video game software title of 2009 was “Call of Duty: Modern Warfare 2” for the Xbox 360, followed by “Wii Sports Resort” for the Nintendo Wii, according to NPD data. Six of the top ten titles were games for the Wii, underscoring the popularity of Nintendo’s gaming console among casual gamers.

Overall, the video game industry has been one of the fastest growing sectors in the digital economy. Total video game sales were only $7.9 billion in 2000.

“In 10 years, the industry has changed dramatically in many ways, but most importantly it was grown over those years by more than 250 percent at retail alone,” said NPD analyst Anita Frazier. “Considering there are many new sources of revenue including subscriptions and digital distribution, industry growth is even more impressive.”

Video Games Bigger Than Movies in the U.K.

Last year, U.K. consumers spent more money on video games than movies—both in theaters and on DVD—a report by the Daily Telegraph said.

But critics of video gaming argue that technological advancement in the industry are a detriment to human behavior. “Too many politicians think video games are played by teenage boys staying up all night shooting things in their bedroom,” said Tom Watson, former Cabinet Office minister in the U.K., told the Telegraph.

Two of the world’s biggest video game publishers are Activision Blizzard, Inc. and Electronic Arts, Inc. Both companies will report their fourth-quarter and full-year 2009 earnings next week, when analysts will get a fuller picture of video game sales during the 2009 holiday shopping season.

In recent years, a shift in the industry has seen sales of portable and interactive video games grow exponentially, especially multiplayer games played online and games for the Apple iPhone/iPod Touch.