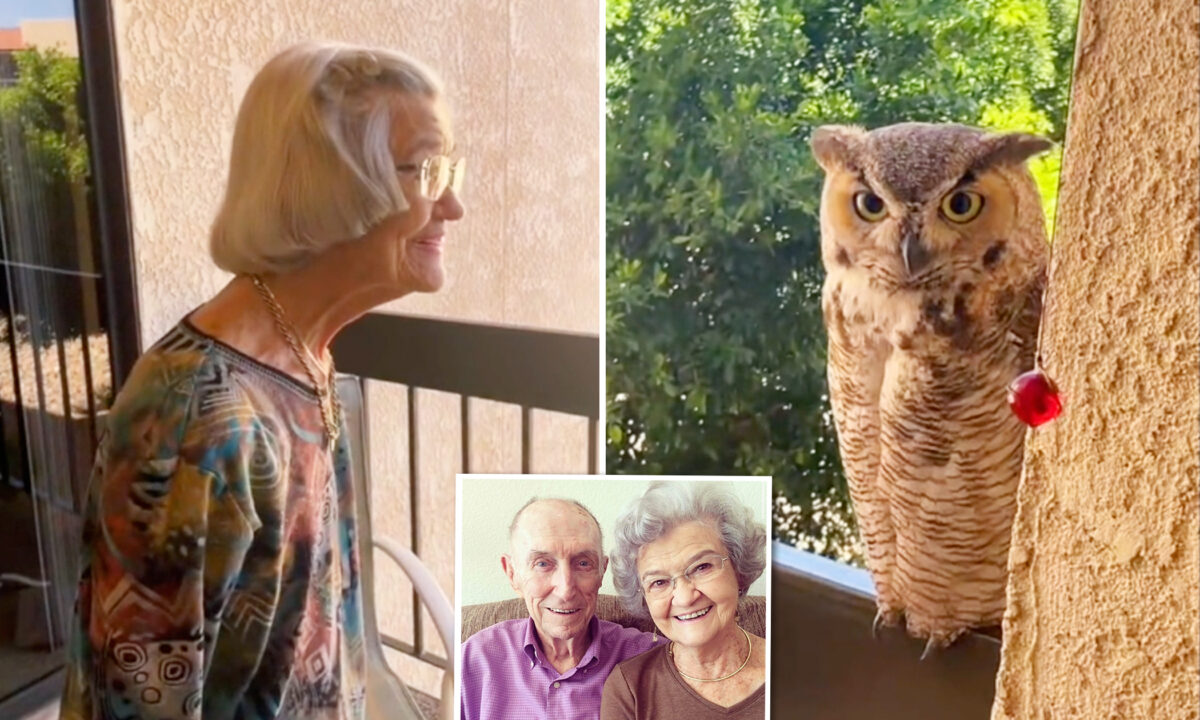 When a 98-year-old woman started receiving daily visits to her balcony from an adorable chatty owl, her granddaughter couldn’t resist recording their interactions. The family believes the little bird could be a sign from their dearly departed grandpa.

Shai Dunseath, a 34-year-old account manager from Arizona, lost her grandpa Bob on Feb. 3, 2020, at the age of 92. Her grandmother Ranna, now 98, married her sweetheart on July 8, 1950. Today, Ranna lives in an assisted-living facility with Shai’s aunt and uncle nearby.

The owl first made his appearance on Feb. 24, 2022. Shai believes that Ranna and the owl’s connection carries a special significance.

“My mother, my sister, me, we’re very spiritual, and I fully believe in messages from the other side,” she said.

“We were just like, ‘Oh my gosh, that’s so cool,'” Shai told The Epoch Times. “Feb. 24 is the day that we celebrated my grandpa’s life. [The owl] started coming around two years to the day that it was my grandfather’s celebration of life.

“We were all shocked. I mean, I’ve lived here my whole life; I’ve never even seen an owl, and to be able to get within inches of him … he’s very calm.”

The little bird has since met Shai’s mom, uncle, sister, and nieces, but by far its favorite family member is Grandma Ranna.

“He does tend to look for my grandmother,” said Shai, who has a twin and claims their grandparents were always their best friends.

“He tracks where she goes. He doesn’t get up and fly and follow her, but his head follows. He was very vocal when she came out. She would just be like, ‘Woo woo,’ and he loved it!”

Weekly visits turned into bi-weekly, then daily visits, with the little bird appearing on Ranna’s balcony even before she woke and not leaving until sunset.

“The bird does go to other balconies, but I will say he spends the majority of his time with my grandma,” said Shai. “I’m telling you, she’s living my dream; I think she’s living a lot of people’s dreams, like Snow White.”

Millennial Shai has been sharing her beloved grandma with the internet for years. But when she posted a video of Ranna’s feathered friend and the pair’s heartwarming interactions on TikTok, the clip went viral, with over 7 million views across social media to date.

Shai thinks her grandmother is “the best human being on the planet,” and was overjoyed by the positive response.

“I’ll go live on TikTok and people will say hello from Costa Rica, hello from the Philippines, hello from New Hampshire,” said Shai. “I think it’s just so cool that she can be so connected … we got her an iPhone for FaceTiming during COVID and she couldn’t even figure that out, so she’s just mind blown that her face ends up in the Philippines!”

Shai is glad that Ranna now has a companion to fend off loneliness at her assisted-living facility. The little bird’s daily visits remind her of her grandparents’ inseparable bond.

“Truly, I don’t think we ever even saw them have an argument, I think they just were best friends,” Shai reflected. “They just respected each other so much, they just loved each other.

“They raised four kids, and in turn, all of us cousins, all the aunts, all the uncles, everybody gets along. I think that’s kind of hard to come by nowadays.”