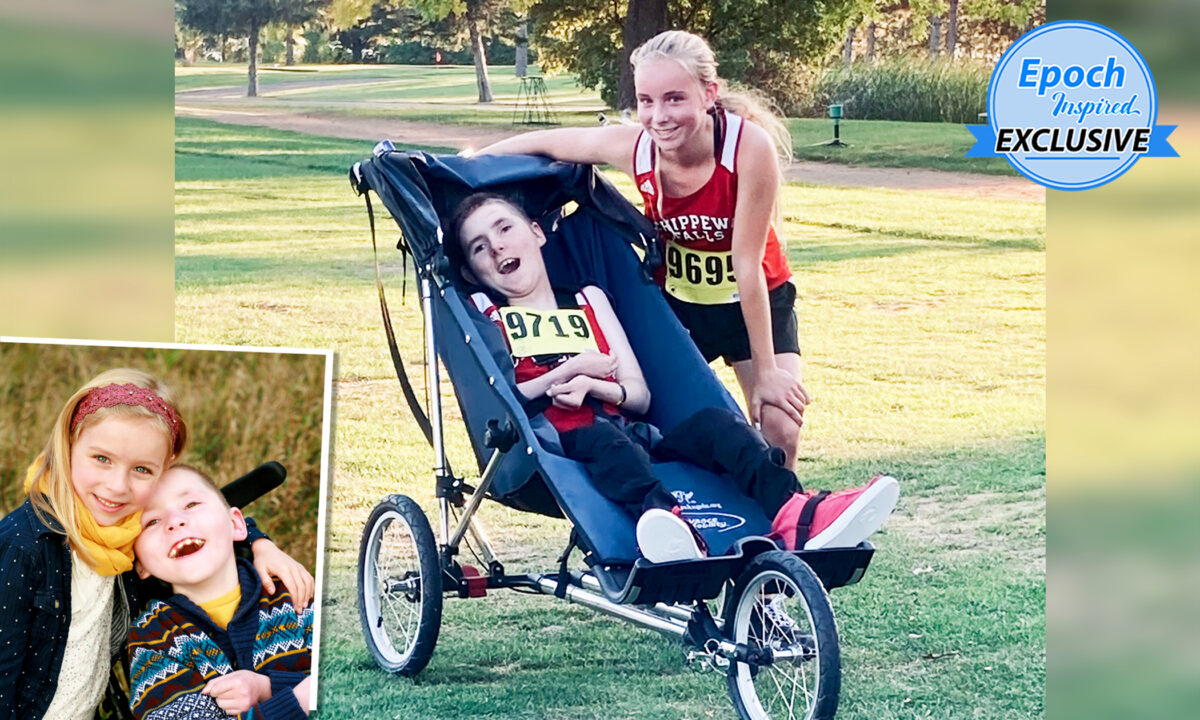 Video: 14-Year-Old Runner Pushes Her Big Brother in Wheelchair so They Can Race Together

A little sister determined to live up to the family values of 'caring, compassion, and cooperation.'
BY Louise Chambers TIMEDecember 12, 2021 PRINT

Unwilling to see her brother relegated to the sidelines in his wheelchair, a high school cross-country runner takes part in school races pushing him around the course. The pair are not officially recognized as legitimate competitors, but that doesn’t stop them from crossing the finish line as winners every time.

Teens Jeffrey and Susan Bergeman are both freshmen at Chippewa Falls High School, Wisconsin, the same school that their parents attended. Recently, 14-year-old Susan crossed the finish line of the 5K Big Rivers Conference Championships meet in Eau Claire with her 15-year-old brother in just 31 minutes. It was the last race of the season and their personal best finish time.

“They are truly just great kids,” mom Jess Bergeman told The Epoch Times. “They run their race, and at the same time, remind us that life isn’t all about winning—what matters most is love.”

Jess, who works as a patient care associate in critical care for Eau Claire’s Mayo Clinic Health Systems Hospital, said that the siblings had a great time running this year, and were met with much support and kindness from the fans and spectators who were “all inspired by what the pair were doing together.”

“As parents, we feel very proud of Susan and Jeffrey running together,” she added. “We recognize the hard work that they both have put in to be ready for the races, and are excited for them to be out there with all the other athletes who have worked hard, too.”

Jess shared triumphant photos of Susan and Jeffrey’s race completion on social media. They didn’t place, she conceded, but they smashed their goals and raised awareness about the necessity of inclusion in the process.

Susan and Jeffrey are attracting big media attention, yet despite the fact that they train with their cohort and represent their school, the Wisconsin Interscholastic Athletic Association has ruled that they may not compete in an official capacity; the siblings’ race times are neither logged nor counted against their fellow runners.

“My brother and I are both super competitive so it does kind of annoy us a little bit,” Susan told WEAU 13. “We are having fun, and we hope to get to a competitive level, and just evolve this sport and make it so that it’s more inclusive.”

Jeffrey was born healthy, but a sudden cardiac arrest at 22 months that deprived his brain of oxygen for 20 minutes caused several debilitating, life-long conditions: cerebral palsy, epilepsy, and dysautonomia. He can no longer walk or speak but communicates through intentional head nodding and special computer-controlled eye gaze movements. He also has a service dog, named Thor.

“Jeffrey has learning challenges and requires support at school,” Jess told The Epoch Times, “however, he is able to understand much of what is said to him, responds to questions, and is able to express his likes, dislikes, and feelings.”

The proud mom said that it is really special to see Jeffrey find something he loves that can also inspire others. By running with her brother, Susan is out there living up to the values of “caring, compassion, and cooperation” her family has tried to instill in her.

Jess and her husband, Jordan, both 36, were high school sweethearts who married in 2005 and settled in their hometown of Chippewa Falls after college. Both of them being runners, they each ran with Jeffrey in community races for many years. Susan took over of her own volition around the age of 10.

“I helped her with her training and she learned how to push the chair safely while running,” Jess explained. “She and Jeffrey ran their first 5K together in 2016 when they were only 9 years old.”

Alongside a third sibling, 9-year-old Samuel, adopted from Ethiopia, Jess claims her kids are the best of friends. Jeffrey and Susan are only a year apart and have always been inseparable; when Jeffrey acquired his disabilities, Susan took on a watchful, protective role.

“Anytime Jeffrey has had surgeries or illnesses that have landed him in the hospital, and there have been many,” said Jess, “Susan has always been his biggest support warrior. Even though they aren’t in the same classes at school, Susan always stops by Jeffrey’s special classroom to check on him and see how his day is going.”

Jeffrey, in turn, takes his role as big brother very seriously by being Susan’s confidant, and by making her laugh constantly.

For Jess and Jordan, who’s a network engineer for the Wisconsin State Patrol, family time is paramount. Basketball, soccer, bike rides, and trips to the movie theater or local ice-cream shop are some of their kids’ favorite activities.

“Really, it’s more about being together than the specific activity being done,” said Jess.

The proud mom of three remains surprised at the interest her teens have garnered by doing something that is “so normal” for their family. She and Jordan appreciate the kindness and support that many have offered by reaching out.

Jess hopes that their family’s story inspires other people to do more good. “Simply extending kindness and compassion to one another is what makes this world a better place for all of us to live in and enjoy together,” she said.