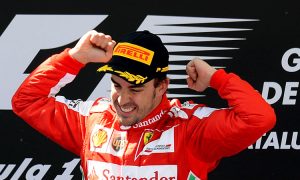 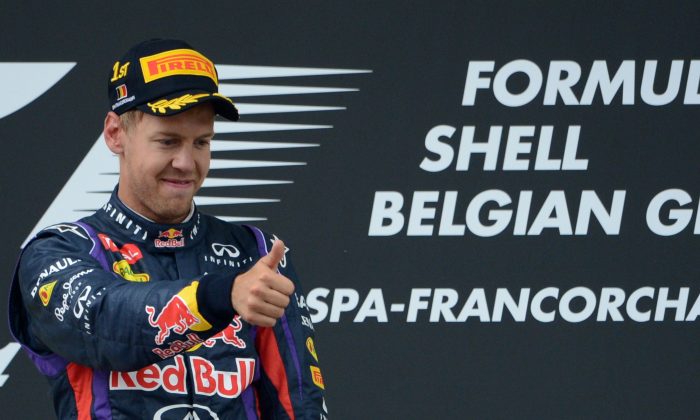 Red Bull Racing's Sebastian Vettel celebrates on the podium at the Spa-Francorchamps ciruit in Spa on August 25, 2013 after the Belgium Formula One Grand Prix. (John Thys/AFP/Getty Images)
Motorsports

Red Bull’s Sebastian Vettel turned in his usual performance at the Formula One Belgian Grand Prix at Spa-Francorchamps Sunday, taking the lead on the first lap and driving away from the field seemingly without effort. After the first lap he was four seconds ahead; no one ever came close to challenging.

Vettel’s 31st Grand Prix win gives him such a big gap in points that his fourth consecutive World Drivers’ Championship seems almost assured. He is only one win behind Fernando Alonso who has been driving

The Red Bull driver qualified second behind Mercedes’ Lewis Hamilton, but Hamilton’s lead lasted only until the fourth corner of the first lap—the Red Bull, with is lower drag, steamed past on the Kemmel straight and disappeared into the distance, and Vettel stretched the lead to more than 17 seconds by the end of the race.

“It was fantastic race for us from start to finish; really very good tactics. Obviously it helped in the first lap to have the tow off Lewis [Hamilton] through Eau Rouge and go flying past,” Vettel told NBCSN. “Once I passed him we had incredible pace and really could control the race until the end. We were a bit afraid of the rain coming at the end, but I think it just passed the circuit

“Thanks to the team; all the guys have been working very hard. Fantastic result. Can’t be any better.”

For Vettel the race was an easy cruise; behind him, his WDC competitors fought hard for every point they could get. Ferrari’s Fernando Alonso started ninth, moved up to fifth on the first lap, and forced forward to finally finish second. Lewis Hamilton finished third, driving as well as he could but never having the car to catch the cars ahead.

Kimi Raikonnen, who started the race eight but second in points, had brake issues from the start of the race until lap lap 27, when his brakes gave up totally and he brought the car back to the garage. The former world champion dropped to fourth in points; he never had a real good shot at catching Vettel, now he has almost none.

Neither do Alonso or Hamilton have much chance of taking a third or second driver’s title; the combination of Sebastian Vettel and the Red Bull RB9 is just too good.

Alonso might well be a better driver; he took second in the race and second in the points despite not having half the car. Alonso has carried Ferrari for two seasons; the 2013 is better than 2012’s, but it cannot match the Red Bull. Right now, nothing can.

The Mercedes is a great car for one lap; Lewis Hamilton has won four poles in a row. The car just can’t keep it up over the length of a race; tire wear, particularly at the rear, forces other chassis compromises which keep the car from matching the Red Bull.

Vettel has not won his fourth WDC yet; with only a 46-point lead over Fernando Alonso and eight races left on the schedule, two bad races could ruin his season. But Vettel rarely has bad races; neither does the Red Bull chassis or Renault engine. Only 25 years old, the youngest three-consecutive title winner is on track to surpass Michael Schumacher and win the most titles at the youngest age if both Red Bull and Vettel can keep it up.

The next race, the Formula One Italian Grand Prix at Monza, should also suit the red Bull chassis, where cars run with almost no wing; the Red Bull, which develops downforce without drag, should have no trouble staying up front.

Sebastian Vettel is a very good driver in a very good car. With Red Bull choosing Daniel Ricciardo as the number two driver for next season, Vettel is assured his competition won’t be driving what has been the best car on the grid for the past three seasons.

F1 gets all-new engines for 2014, tiny turbocharged V6s. No one knows which engine will work better than which other, so even with the best chassis, Vettel could lose his edge next year. But for this year, his points lead is big enough just past halfway that it is already safe to say, he looks likely to win his fourth title in a row.

Red Bull has an equally large lead in the Constructors’ championship. Mark Webber brought the second Red Bull home in fifth, earning Red Bull 312 points, 77 more than second-placed ahead of Mercedes and another 17 ahead of Ferrari.

Mercedes is in good shape to hold on to second here. Hamilton is fast and generally reliable, and team mate Nico Rosberg is as fast, and aside from some unfortunate DNFs early on, has been on par with his World Champion team mate all year—he finished fourth at Spa, right behind Hamilton.

Ferrari is third and close to Mercedes, but that is almost all due to Alonso. Felipe Massa, who was told before Spa that he had two races to prove himself worthy of a Ferrari seat in 2104, finished seventh, almost a minute off the lead. Had not a few drivers picked up penalties for bad driving, he might not have made the top ten.

WDC points are calculated from the final places of both cars, and Massa doesn’t appear to have the pace to assist his team or cement a place on the team for next season.

Lotus is fourth in constructors’ points, but so far back they have no chance. the car is great on tire wear and both drivers are quick, but the car is not as quick as the competition, and Kimi’s brake failure hurt a lot. Grosjean finished eighth with a one-stop strategy, but only qualified seventh. If the car were quicker …

Another former world champion, Jenson Button, finished sixth. He had the pace to do better, but strategy failure at McLaren cost him a possible podium. The team apparently decided on a one-stop strategy, but called him in on lap 17, about five laps too early.

Button was in third, 12 laps from the end, when he had to pit for fresh rubber. had he stayed out those five extra laps early on, he might have lost a few positions but also might have made them back up. had his team settled on two stops at the start, Button might have pushed harder in the middle stint and pulled out a podium.

McLaren is fifth in constructors’ points, with just over a fifth of Red Bull’s points.  The team had said it would stop development on the 2013 car and focus on next year, which is probably a good idea. Button is obviously still fast even is the slow 2013 McLaren. Co-driver Sergio Perez is  fast but reckless; he won’t be any help in team points.

The Formula One Gran Premio d’Italia starts at 2 p.m. local time, 8 a.m. Eastern on Sunday Sept. 8. Tickets and travel plans are available through the official Formula One website.