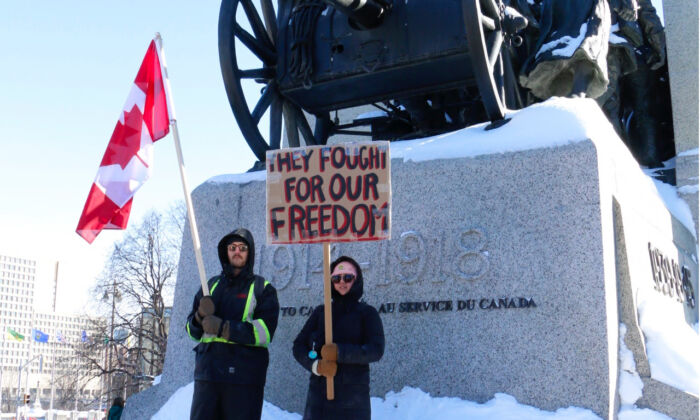 Veterans to Rally in Ottawa Throughout Summer Against Remaining Pandemic Mandates

A veteran’s group plans to hold a series of events in Ottawa to demand the federal government end all remaining COVID-19 mandates and restrictions next week, on Canada Day, and throughout the rest of summer.

Andrew MacGillivray, a steering committee member for Veterans for Freedom (V4F), says his group will hold a three-day conference in Ottawa June 22-24 aiming to educate parliamentarians with “documentation and high-level strategy,” and have the federal government eventually lift all remaining COVID policies.

“We actually have a fair bit of information policy, and things written out, and documents that we’re going to be sharing with the MPs, and we’re going to be discussing,” MacGillivray said in an interview on David Paisley’s YouTube program “Live From The Shed” posted on June 15.

“We believe the pen is mightier than the sword, and so we had people working on this.”

The Navy veteran said V4F has partnered with Police on Guard, Mounties for Freedom, Canadian Frontline Nurses, and other groups to create the Canadian Citizens Coalition.

Specifically, the group aims to have the federal government repeal remaining mandates, reinstate federal workers who lost their jobs related to mandates, repay those workers for lost wages, and “repair the divide they’ve created with Canadian society,” MacGillivray said.

On June 15, Intergovernmental Affairs Minister Dominic LeBlanc told reporters on Parliament Hill that the federal government would “absolutely not” compensate civil servants who were put on unpaid leave for refusing to take COVID-19 vaccinations.

MacGillivray said his group plans to hold a meeting with up to 17 “mostly Conservative” MPs on June 22 and the following two days of the conference will be town hall-style events with key people in the “freedom movement.”

“There’s one NDP in there, and we’re trying to get some of the Liberals who have been speaking out against the mandates as well,” he said.

V4F describes itself as a group made up of Canadian veterans working to “restore fundamental freedoms for all Canadians,” and is also coordinating the route for James Topp and his supporters to walk through Ottawa to the National War Memorial on June 30. The route has received a police escort, MacGillivray said.

Topp, a Canadian soldier who was charged by the Department of National Defence in May after publicly speaking out against federal vaccine requirements while in uniform, left Vancouver in February to walk to Ottawa in protest of federal pandemic mandates.

During the interview, MacGillivray shared V4F’s plans to celebrate Canada Day on the lawn in front of the Supreme Court of Canada, which include a speech by Topp in the morning, a march to Ottawa City Hall in the afternoon, and a dance party on Parliament Hill that evening.

In addition, the group is setting up “Camp Eagle,” a semi-permanent camp east of the national capital to support ongoing protest against the mandates throughout the summer, he said. The camp is on private property about 40 minutes outside the city centre.

“Basically, we’re going to stay there the entire summer. We’re going to implement our strategy and our plan to lean on the government through education, information, et cetera.”