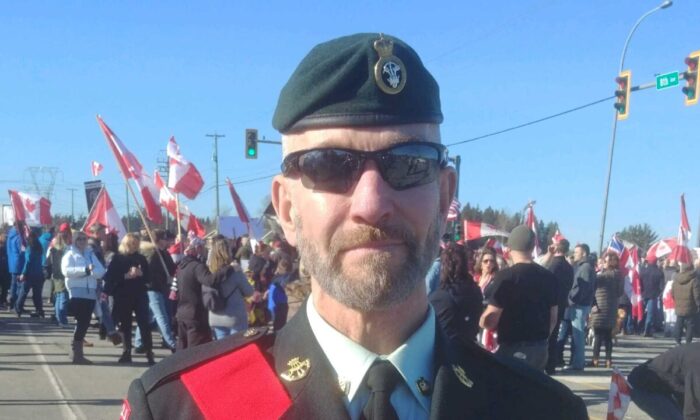 As Warrant Officer James Topp continues his journey from Vancouver to Ottawa to protest government-imposed COVID-19 vaccination requirements, reports recently surfaced in the media that he is facing charges from the Canadian military for supporting the truckers’ Freedom Convoy.

Yet the charges were laid some three months ago, in February, leaving Topp feeling compelled to clarify what they mean.

“I’ve been charged. I’m not incarcerated. It has nothing to do with criminal law. This is military law under the National Defence Act,” he said in an interview. “So it’s important, I think, that people understand that I don’t have criminal charges pending. This is internal to the Department of National Defence (DND).”

Topp had posted a number of videos online in which he criticizes the federal government’s policy requiring its employees to be vaccinated against COVID-19 as a term of employment.

In one video, he appears in uniform, which he says he was wearing without the authorization of his chain of command, while also noting he was ready to suffer the consequences.

Now travelling through northern Ontario toward Thunder Bay, Topp has completed more than half of his 4,293-kilometre trek in less than three months, all on foot. His merchandise store has had to stop taking orders in order to catch up with the demand for his clothing. And he is working on turning the idea of his protest, titled Canada Marches, into a non-profit organization after support for his cause grew.

Topp’s lawyer, Phillip Millar, is a former Canadian soldier. Millar says he is currently representing some 20 Canadian military personnel facing expulsion from the Canadian Armed Forces (CAF) because of their COVID-19 vaccination status or their refusal to attest to their status, with the number of individuals seeking his counsel growing.

The federal government unlawfully chose to implement a mandatory COVID-19 vaccine edict in the military, he says, forcing several members to face being released.

“What I believe happened, is the Liberal government had this policy that says everybody [in the military] will get vaccinated or we’ll kick you out as a way of trying to influence public opinion. And they’re doing it in a way that tramples on the rights of soldiers, sailors, and airmen,” he told The Epoch Times.

“I think what’s happening in the Canadian Forces is politics. They’re using the soldiers as guinea pigs to affect policy.”

In a statement provided to The Epoch Times, the DND and CAF said that “all Canadian Armed Forces members are held to the highest standard both while in uniform and while off-duty.”

“Members of the CAF must remain impartial when communicating publicly and are not permitted to express their personal views when in uniform. If an incident, professional shortcoming or special circumstance arises, we take the necessary steps to determine the most appropriate course of action to take,” it noted.

No Right to Lawyer Representation

The statement said the DND and CAF “are aware of 13 individuals who have been or are being investigated for their support of the Freedom Convoy.” Seven cases have been completed, and of the six cases still ongoing, only Topp and Avr MacPherson have been charged so far.

Millar said the DND relaid the charges as a strategy that would prevent him from representing Topp in a trial.

Military disciplinary proceedings fall under the Code of Service Discipline, part of the National Defence Act. Summary trials deal with relatively minor service offences and are meant to allow the military member to return to duty quickly, according to the government website. The procedures for summary trials are less formal than those at courts martial, and there is no right to be represented by a lawyer.

Courts martial, on the other hand, are formal military courts, which involve military judges, and allow the accused to be represented by defence counsel.

Millar added that he believes charging Topp and other soldiers under Section 129 rather than with refusal to take a vaccine, which is covered under Section 126, was the only scenario under which the DND could attempt to win.

Under Section 126 of the National Defence Act, “Every person who, on receiving an order to submit to inoculation, re-inoculation, vaccination, re-vaccination … wilfully and without reasonable excuse disobeys that order is guilty of an offence.”

“But they’re not charging people with that because they don’t want to [hold] up the system with a bunch of courts martial,” Millar said. “If they had a strong case for it, then charge him and run it. But they’re deliberately trying to keep it out of their own military justice system [by removing the court martial option].”

Topp says he remains stoic and unfazed by the new scrutiny he’s receiving, still determined to get to Ottawa and have his voice heard by members of Parliament.

“Between the time we started and now, we’ve got a fairly good routine and the team is coming together nicely,” Topp said. “Ultimately, it’s been a positive experience with more folks giving us support and reaching out to us.”

However, he added that “it’s important to clarify that this is actually old news and that the charges were made in February, and it’s difficult for them to go forward in a number of avenues because I’m a private citizen.”

After serving in the CAF for 28 years, Topp was told he needed to be fully vaccinated against COVID-19 to remain in the military as a reservist. Because he chose to stay vaccine-free, he is in the process of being released by the CAF. He began his march on Feb. 20 at Terry Fox Plaza in Vancouver and expects to reach the Tomb of the Unknown Soldier in Ottawa by mid-June.