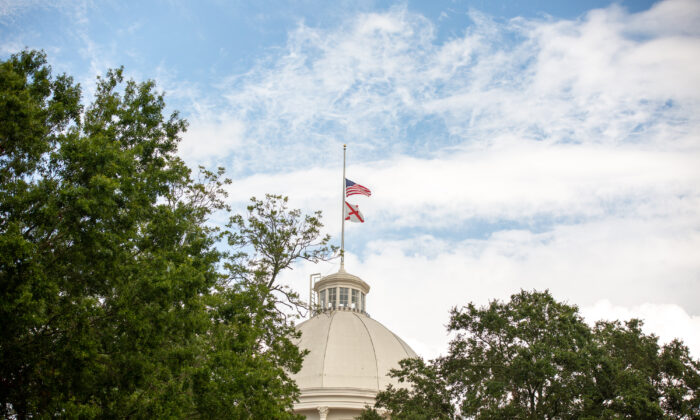 Flags fly at half-staff at the Alabama State Capitol in Montgomery, Alabama, on July 26, 2020. (Lynsey Weatherspoon/Getty Images)
US News

Christopher Sign, the veteran reporter and anchor who broke one of the biggest stories of the 2016 presidential election, died overnight on June 12, according to a statement from his employer, ABC 33/40. He was 45.

The death is being investigated as an apparent suicide, according to police, AL.com reported.

“Our deepest sympathy is shared with Christopher’s loving family and close friends. We have lost a revered colleague whose indelible imprint will serve forever as a hallmark of decency, honesty, and journalist integrity. We can only hope to carry on his legacy. May his memory be for blessing,” ABC 33/40 Vice President and General Manager Eric Land said in a statement.

Sign was the first to report on the tarmac meeting between former President Bill Clinton and then-Attorney General Loretta Lynch in late summer 2016. At the time, Clinton’s wife, Hillary Clinton, was running for president, and Lynch oversaw the Justice Department that was investigating Clinton’s unauthorized use of a private email server to conduct government business.

Sign protected the source from whom he received the tip about the meeting, and later wrote a book about his experience of getting the tip and covering the story.

According to ABC 33/40, Sign returned to Alabama from Phoenix after turning down a job for a national network so that he could be closer to his family.

“What most people don’t know is Chris turned down an opportunity to work for one of the national networks to come to ABC 33/40, and he made that decision because of his family,” the network said in a statement. “That decision put him in a place where he could see his boys off to school in the mornings, watch them play baseball in the evenings, and take them fishing on the weekends.

“Chris was a tremendous leader in our newsroom. He worked with our reporting staff on a daily basis, but also worked behind the scenes with the I-Team and with news managers on coverage of major events. You were very likely to get an email from him with a story idea in the middle of the night. He was passionate about journalism and showed it each and every day as he pushed himself and his colleagues to be the best.”