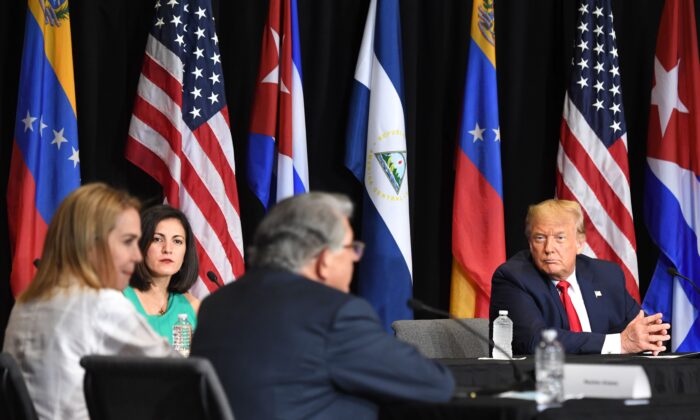 President Donald Trump holds a roundtable on "Supporting the People of Venezuela" at Iglesia Doral Jesus Worship Center in Doral, Fla., on July 10, 2020. (Saul Loeb/AFP via Getty Images)
US News

Venezuelan, Cuban Refugees Call on Trump to Help Free Their Countries From Communism

Refugees talk about their firsthand experience with socialism, communism
By Ella Kietlinska

Venezuelan and Cuban activists in Florida on July 10 urged President Donald Trump to help people oppressed by the regimes in their countries to regain their freedom and eliminate narco-terrorism.

Ernesto Ackerman, the president of civic group Independent Venezuelan-American Citizens, requested that Trump “eliminate the germs of socialism” from Venezuela, Nicaragua, Cuba, and other countries in the region and to “help the people of Venezuela to get rid of the narco-terrorists who have kidnapped our nation.”

Ackerman, the son of a Venezuelan concentration camp survivor who still lives in the country, said his organization has lobbied the U.S. Congress for over 18 years to impose sanctions on narco-terrorists in Venezuela.

Orlando Gutierrez-Boronat, Cuban-born co-founder and spokesperson for the Cuban Democratic Directorate, said at the July 10 roundtable, “Supporting the People of Venezuela,” that there “should be a task force [in the United States] to educate Americans about socialism and communism.”

Gutierrez-Boronat shared key life experiences he had in communist Cuba that helped him to understand the nature of socialism and communism.

He recalled that church services in Cuba were attended by very few people, as churchgoers were persecuted and discriminated against by the communist regime for believing in God.

“Everywhere communism and socialism have come to, the first freedom they strike at is religious freedom,” Gutierrez-Boronat said.

The strategic sanctions imposed by the United States and “aimed at the military and the intelligence and security sectors [in Cuba] have weakened them,” he said, adding that this was why protests erupted in Santa Clara in recent months.

Cuba was self-sufficient with a thriving economy, and even exported food, before the communists took over the country in 1959, he said, but “Cuba today cannot feed itself without U.S. donations.”

Gutierrez-Boronat criticized Hollywood and media outlets that spread false information about socialism, communism, and about what happened in Cuba.

He also urged Trump to consider indicting the Cuban regime for its 1996 killing of Cuban Americans who were helping people escape the island nation by raft in international waters, and for other crimes against humanity committed by the Cuban regime.

Trump said the United States has imposed “historic sanctions” on socialist dictator Nicolás Maduro’s regime in Venezuela and that it stands “with the righteous and rightful leaders of Venezuela.”

Trump added that his administration indicted Maduro’s regime for narco-terrorism and imposed sanctions on Nicaragua for human rights violations. He also ended the Obama administration’s “pro-communist policies” that he said Joe Biden has pledged to reinstate.

Congressman Mario Díaz-Balart (R-Fla.) said that socialism and communism in Venezuela, Nicaragua, and Cuba are not only disastrous for people there, but also pose a national security threat to the United States.

Lourdes Ubieta, a Venezuelan-born activist who has been working for media in Venezuela and the United States for over 25 years, said that her Cuban parents living in exile in Venezuela fled Cuba to escape “Castro communist tyranny.”

Venezuela was a prosperous and generous country until 1999, when Hugo Chávez took power and imposed socialism on the country.

“Out of 7.8 million children in the country, 40 percent report difficulties [attending] school for problems with water supplies, blackouts, no food at home, lack of transport, or lack of teachers,” she said, adding that the child mortality rate has also increased dramatically.

Venezuela generates most of its revenue from oil production, and its oil reserves are some of the world’s largest. During the 1970s, Venezuela’s oil industry was nationalized. In 1989, oil prices plummeted worldwide, causing the country’s oil-reliant economy to fall. Food and gas prices jumped and people’s living conditions deteriorated.

Chavez’s socialist policies made the country even more dependent on oil export, and his successor, Maduro, continued his policies.

“Transnational organized crime controls Venezuela,” Ubieta said. “Drug cartels, Colombian guerrillas, international mobs, and Iranian financed terrorists operate freely” under the Venezuelan regime “with the Cuban agenda.” He added that Trump has been the only U.S. president “who has stood firm against these criminals.”

“I ask you [Mr. President] not to leave Venezuela. Each minute that passes is one of the greatest sufferings for Venezuelans,” she said.

Trump said: “I will not forget what I heard today. It’s very moving, it’s a very tough situation, and we’ve made a lot of progress as you probably have seen.

“I have a feeling you won’t be disappointed.”

Earlier on the same day, ahead of Trump’s visit, the Democratic Party organized a virtual roundtable on Facebook for Cuban and Venezuelan community leaders to condemn the Trump administration for “broken promises to Venezuelan and Cuban communities,” according to FloridaDems.org.

“He’s going to sit down today with Venezuelan migrants, I saw his agenda. Is he willing to grant Temporary Protected Status for Venezuelans? … We have 150,000 people here in this country with a vulnerable migration status,” Leopoldo Martínez Nucete, a Venezuelan Latino Victory board member, said at the Democratic roundtable.

Frank Mora, a Cuban American and the former deputy assistant secretary of defense for the Western Hemisphere under the Obama administration, said at the Democratic roundtable: “Why isn’t he granting [Temporary Protected Status] for Venezuelans? Why increase the deportations of Cubans? Why are Cubans being detained without their cases being considered in Louisiana? Why are there so many Cubans in at the U.S.–Mexico border without also having their cases heard?” reported FloridaDems.org.

The TPS Act for Venezuelans was passed by the Democrat-controlled House in July last year but did not pass the Republican-controlled Senate. Sen. Tom Cotton (R-Ark.) said that while the current situation in Venezuela is exactly the reason the temporary program was created, it’s practically impossible to rescind the status, once granted.

The Trump administration tried to rescind TPS designations for six countries in 2018 and 2019 but was blocked by judges each time.