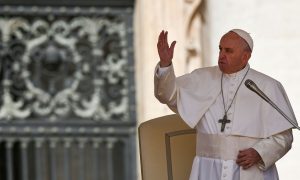 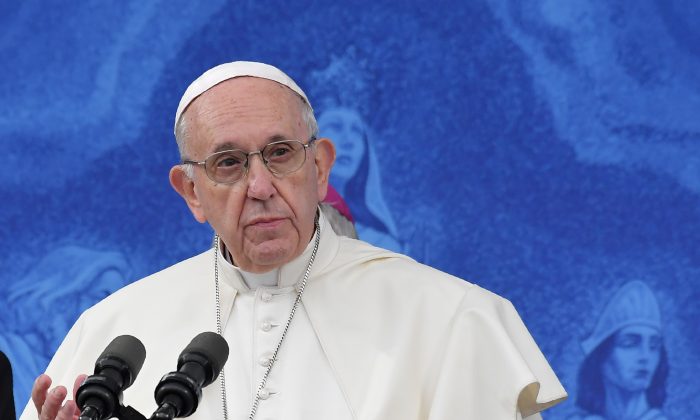 Pope Francis leads the Angelus at the Drum Crescent, Knock, County Mayo on August 26, 2018, on the second day of his visit to Ireland to attend the 2018 World Meeting of Families. (Tiziana Fabi/AFP/Getty Images)
International

The Vatican announced on Monday that blessings for unions of same-sex people are “illicit” because God “cannot bless sin,” while blessings for individual persons with homosexual inclinations are permissible.

The Vatican’s orthodoxy office, the Congregation for the Doctrine of the Faith, issued a formal response of “negative” to a question of whether the Catholic churches have the power to give the blessing to unions of persons of the same sex on March 15.

“It is not licit to impart a blessing on relationships, or partnerships, even stable, that involve sexual activity outside of marriage (i.e., outside the indissoluble union of a man and a woman open in itself to the transmission of life), as is the case of the unions between persons of the same sex,” the statement said.

What is blessed should be “objectively and positively ordered to receive and express grace” according to the designs of God, the statement explained.

The blessing of homosexual unions cannot be considered licit because “there are absolutely no grounds for considering homosexual unions to be in any way similar or even remotely analogous to God’s plan for marriage and family.”

The statement suggested that it does not preclude the blessings given to individual persons with homosexual inclinations, “God Himself never ceases to bless each of His pilgrim children in this world.”

“[God] does not and cannot bless sin: he blesses sinful man,” the statement added.

The statement said the Christian community and its pastors are called to welcome gay people “with respect and sensitivity.” And the Vatican’s response is not a form of “unjust discrimination,” but rather “a reminder of the truth of the liturgical rite.”

“Homosexual people have the right to be in a family. They are children of God,” Pope Francis said during a 2019 interview with a Mexican broadcaster, Televisa. “You can’t kick someone out of a family, nor make their life miserable for this. What we have to have is a civil union law; that way, they are legally covered.”

Francis was referring to the position he took when he was archbishop of Buenos Aires. At the time, Argentina’s lawmakers were considering approving gay marriage, which he and the Catholic Church opposed.

Pope Francis’s comments were cut by the Vatican but resurfaced in a documentary last year.

Sister Simone Campbell, executive director of the U.S.-based NETWORK Lobby for Catholic Social Justice and an advocate for greater LGBTQ inclusion in the church, said she was relieved the Vatican statement wasn’t worse.

She said she interpreted the statement as saying, “You can bless the individuals (in a same-sex union). You just can’t bless the contract.”

“So it’s possible you could have a ritual where the individuals get blessed to be their committed selves.”