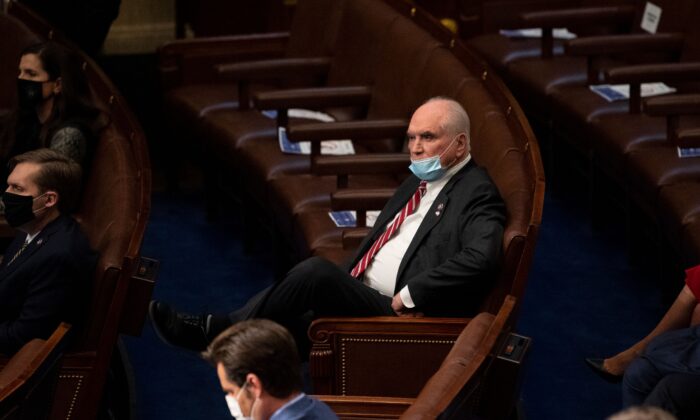 Rep. Mike Kelly (R-Pa.) attends a joint session of Congress to certify the Electoral College votes of the 2020 presidential election in the House chamber at the US Capitol in Washington, DC, Jan. 6, 2021. (Caroline Brehman/AFP via Getty Images)
CPAC 2021

The vast majority of the COVID-19 relief bill isn’t targeted for actual pandemic relief and is intended to back Democratic-controlled states, Rep. Mike Kelly (R-Pa.) told The Epoch Times at the Conservative Political Action Conference on Feb. 28.

In an attempt to bypass the necessity for Republican votes in the Senate, Democrats are trying to push the COVID-19 relief bill through the budget reconciliation process.

Kelly said that if one takes a look at the item-for-item list of where the money is planned to be spent, one can find that a lot of it is allocated to House Speaker Nancy Pelosi’s (D-Calif.) promises.

“What in this spending is actually going to help people that have had COVID? And then you get down to the point—no, it’s not, it’s going to go for a lot of other features, a lot of other promises that Speaker Pelosi made. And that’s what’s going to come to fruition right now,” he said.

All Democratic senators would have to vote in favor to pass the bill, however, Sens. Joe Manchin (D-W.Va.) and Kyrsten Sinema (D-Ariz.) have expressed objections to including a boost to the federal minimum wage in the bill.