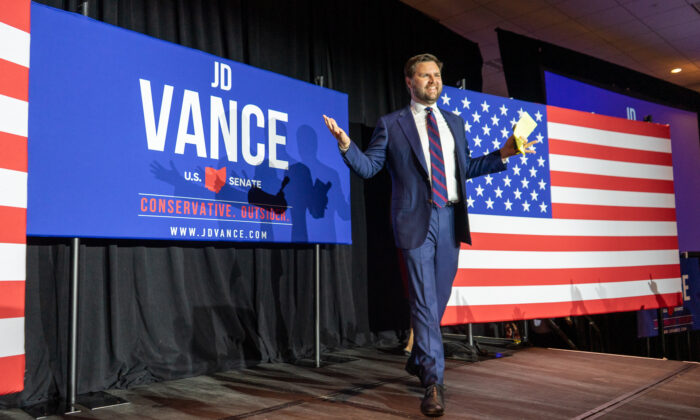 After winning the Ohio Republican Senate primary on May 3, J.D. Vance addressed his supporters at a victory party in Cincinnati. (Courtesy of Melissa Townsend)
2022 Midterm Elections

That’s what J.D. Vance’s victory in the Ohio Republican U.S. Senate primary on May 3 showed in the first test of Trump’s influence in the 2022 midterm election cycle, Defending Democracy Together Director Bill Kristol says.

“Anybody who dismisses Donald Trump as not a major factor in the party is crazy,” said Dave Carney, a Republican consultant.

When the race was called in Vance’s favor, the “Hillbilly Elegy” author and venture capitalist stepped on stage at a victory party in Cincinnati, 45 minutes south of where he grew up in working-class Middletown.

Donald Trump Jr.., who publicly supported Vance weeks before his father announced his endorsement of the first-time political candidate on April 15, agreed.

“MAGA is alive and well, and the GOP best take notice and finally understand where the people are,” Trump Jr. wrote on Twitter after Vance’s victory.

Kristol noted that Vance was polling at “about 10 percent” with Mandel and Gibbons leading at 21 percent on April 15. Vance surged in subsequent independent polls before winning by a comfortable margin on May 3.

Vance’s victory increases the likelihood that Trump will ramp up his public support for candidates in upcoming primaries, according to one source close to Trump.

“Vance’s win proves the concept that he can take someone from third or fourth place and pull them into the lead in a crowded primary,” another Trump associate said.

Since he entered the race last July, Vance has faced scrutiny about disparaging remarks he made about Trump in 2016. Club for Growth, a pro-Mandel PAC, poured millions of dollars into attack ads directed at Vance.

When Trump announced his endorsement on April 15, about three dozen Republican Party county leaders in Ohio—and Ohio Value Voters, a conservative group that backed Mandel—wrote a letter urging the former president to rescind his endorsement. In his victory speech, Vance said he would “work hard to earn the support” of his detractors.

“People are caught between the corrupt political class of the left and right,” he said. “They need a representative, and I am that person.”

Timken, who was endorsed by retiring Sen. Rob Portman (R-Ohio), sought Trump’s stamp of approval. She finished in the distance behind Vance, Mandel, Dolan, and Gibbons.

“While tonight’s results are disappointing, I am incredibly proud of the race we’ve run,” Timken said after the race was called for Vance. “From day one, I’ve focused on a campaign for Ohio, in Ohio, fueled by Ohioans, and that grassroots support was evident throughout.

“I am passionate about the future of this state and country, which is why Republicans must retake the Senate and House in November to right the ship and put a check on Joe Biden’s disastrous policies.

“I congratulate J.D. Vance and fully support him in November.”

“Vance is an out-of-touch millionaire who’s made a career of bashing the working class and is the worst possible choice to represent Ohio,” Ryan said after his own victory on May 3.

The Senate is equally split at 50–50; Vice President Kamala Harris has the tie-breaking vote, which gives Democrats the majority.

Republicans can regain control of the Senate by picking up one seat, which enhances the importance of Ohio Republicans holding Portman’s spot.

“I’ve studied this race closely and I think J.D. is the most likely to take out the weak, but dangerous, Democrat opponent—dangerous because they will have so much money to spend,” Trump said in a statement after backing Vance on April 15. “However, J.D. will destroy him in the debates and will fight for the MAGA Movement in the Senate.”

Margot Athon enthusiastically waved a Vance sign at his May 3 victory speech and believes that he’ll “win over” Ohio Republican voters who doubt that he’s a conservative.

“I appreciate his upbringing and his life story,” said Athon, who is from Columbus, Ohio, but now lives in Washington.

“He’s someone who has not been handed anything. He worked for it. He earned it. And those are the elected officials we need in Washington.”