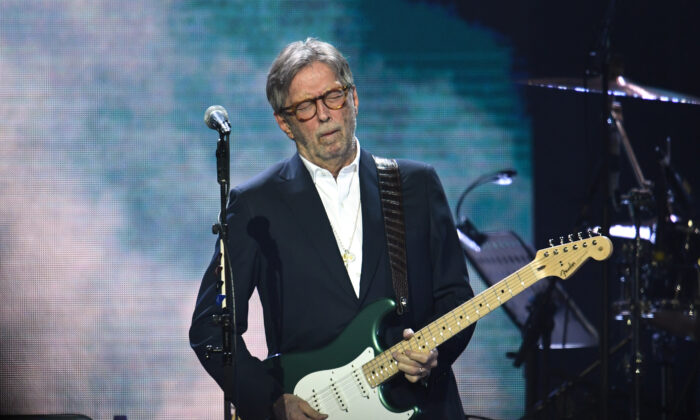 Van Morrison and Eric Clapton Take Back the Culture for Freedom

As anyone even half-awake—as opposed to “woke”—knows, the arts, monolithically left, are about as dead as they’ve ever been in our culture.

Name the genre, it’s one propagandistic bore. The message is always the same—and it’s a downer.

When art is created by conformists—and at this moment those on the left are the biggest conformists imaginable—it’s sure to be worthless.

For the first time ever, as a member of the Motion Picture Academy, I didn’t even bother to vote this year, let alone watch the movies. Who needs Hollywood’s solemn lectures?

But, there’s hope, big hope actually, from the music world and at the highest levels.

British musicians Van Morrison and Eric Clapton—two of the greatest stars of the last 50 years—have broken from the oh-so-tired, conventional “progressive” mold of popular music with not one, but two songs that push the content envelope.

They’re actually taking back the culture for freedom from the left-wing conformists.

Naturally, the songs are being squelched—or, in the case of YouTube, often presented after interminable advertisements from the likes of Stacey Abrams—with their creators being canceled by hordes of leftists on that enemy of all slightly original (read: conservative or libertarian) thought, Twitter.

The first song is an anti-lockdown blues written by Van Morrison and sung by Clapton—“Stand and Deliver”—the proceeds going to Morrison’s Lockdown Financial Hardship Fund.

Needless to say, it’s not getting a lot of radio plays, which is amazing considering the pedigrees of the artists.

You can listen to the song here—it rocks like days of old. Here is a sampling of the lyrics:

Magna Carta, Bill of Rights
The Constitution, what’s it worth?
You know they’re gonna grind us down, ah
Until it really hurts

Is this a sovereign nation
Or just a police state?
You better look out, people
Before it gets too late

Magna Carta, Bill of Rights, indeed. Is this a sovereign nation or a police state? These guys apparently honor our Constitution the way we do here at The Epoch Times.

Maybe Clapton, one of the greatest guitar players of his or any generation, should have been playing and singing this on the steps of the Capitol on Jan. 6.

The second song has the two men singing together—“Where Have All the Rebels Gone?” Their answer:

Well, you can’t be a rebel if you’re a conformist. And that’s, as I noted above and Morrison and Clapton evidently concur, what we see all around us.

But has Clapton gone too far? According to a report from the BBC: “British rock icon Eric Clapton has said he will not perform at venues that require concertgoers to be fully vaccinated against COVID-19.”

Opinions differ, of course, but in an allegedly free society like ours, it should be up to the citizens to decide for themselves what they put into their bodies. What was it we once said—“Our bodies, ourselves”? How times have changed!

The BBC said: “UK Prime Minister Boris Johnson has said proof of vaccination must be shown at clubs and venues from September.

“Clapton said he will not perform anywhere there is a ‘discriminated audience present.’

“In May, Clapton said he had experienced a ‘severe’ reaction to the AstraZeneca vaccine.”

As it happens, Clapton and Morrison will be playing together, far from the authority of Boris Johnson, at the Bridgestone Arena in my hometown of Nashville on Sept. 11.

I plan on being there, sans mask. I wouldn’t want to be part of a “discriminated audience.”