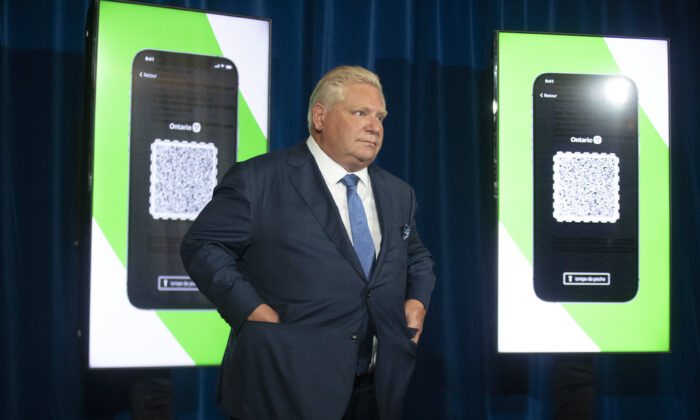 Ontario Premier Doug Ford attends a press briefing at the Queens Park Legislature in Toronto, on Oct. 15, 2021 to announce that the province is making enhanced COVID-19 vaccine certificates with scannable QR codes available for download. (The Canadian Press/Chris Young)
Canada

Vaccine passports mandated by governments will create a highly intrusive surveillance system that not only forces Canadians to reveal their health information but can also track their whereabouts, Ontario’s former privacy commissioner says.

“Wherever you have to give your vaccine passport, it’s not just the QR code. They’re asking you for identification—your driver’s licence, your phone number—there’s personal information linked to it,” said Cavoukian, who is also a senior fellow at the Ted Rogers Leadership Centre at Ryerson University.

Cavoukian, who served three terms as Ontario’s information and privacy commissioner from 1997 to 2014, says the health information collected through the vaccine passport can be retained in association with a person’s geolocation around the world.

This type of data-tracking will create a “global digital infrastructure of surveillance” she added, fed by the “hundreds and thousands of sites that are obtaining these vaccine passports from you.”

Ontario Premier Doug Ford has said the province’s vaccine passport system, which came into effect on Sept. 22, is a temporary measure.

Cavoukian counters that “temporary” measures introduced during emergencies seldom go away. She cited the example of the Sept. 11 terrorist attack against the United States in 2001 while she was still serving as commissioner.

“What often happens is when there’s an emergency, the privacy laws get lifted because it’s an emergency situation and additional measures are introduced. Then, when the emergency ends, those privacy-invasive measures often continue,” she said.

“That’s what happened with 9/11, with the Patriot Act, and others. And so my fear is that people are going to just expect to have to reveal vaccine status on a go-forward basis, even when the pandemic ends.”

The USA Patriot Act was introduced in the wake of 9/11 as a means for the U.S. government to increase its ability to intercept and obstruct terrorist communications and activities. The act expanded the government’s power to monitor phone and email communications, conduct searches, and seize or demand disclosure of records.

Cavoukian says the government has no legal basis to demand that people reveal their medical information, including their vaccination status.

“Health information is very strongly protected,” said Cavoukian. “In Canada, in Ontario, we have the PHIPA, the Personal Health Information Protection Act. So it should be only an individual’s choice if they wish to reveal this information.”

“With vaccine passports, people are being forced, they’re demanded to reveal their vaccine status. And that should be no one’s business except for the individual and their own doctor.”

Debates about the merits of vaccine passports continue, with some experts contending that the system will keep people safer and allow the economy to reopen, with the common good outweighing any privacy issues.

Cavoukian calls this argument “nonsense” because privacy infringements inherently make citizens more vulnerable. She says that instead of vaccine passports, less invasive measures such as rapid testing could be introduced.

“It should never be privacy versus public safety. It’s not a zero-sum game, either-or, win-lose. It has to [be] privacy and public safety,” Cavoukian said.

The privacy expert said her concerns extend to Canadians who chose not to be vaccinated and may face discrimination or even unemployment related to their vaccination status.

“It’s so unfair because there are some people who are immunocompromised, they have anaphylaxis, they cannot get vaccinated. So those people are going to be treated terribly.”

British Columbia residents face one of the most stringent proof-of-vaccination systems in Canada. The B.C. government’s vaccine card, which came into effect on Sept. 13, allows access to certain “non-essential” businesses and services while provincial health authorities do not allow any exemptions for those who remain unvaccinated, including people with complex medical conditions.

Vaccine passport systems have been steadily expanding across Canada since September, and various versions are now enforced or planned in nearly every province and territory.

At the federal level, Prime Minister Justin Trudeau and Deputy Prime Minister Chrystia Freeland announced at a joint press conference on Oct. 6 that federal employees have until Oct. 29 to be fully vaccinated or face being “placed on administrative leave without pay as early as Nov. 15.”

And starting Oct. 30, all travellers aged 12 or older will also be required to provide proof of full vaccination before boarding planes, trains, or marine vessels in Canada.

Cavoukian says she is “very, very concerned” about what happens to the vaccine passport systems’ “inescapable web of surveillance” after the pandemic ends.