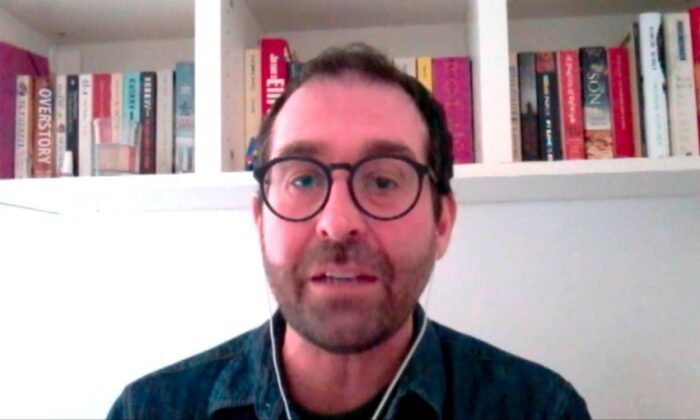 The COVID-19 pandemic appears to be waning across the world, with restrictions being lifted and life, more or less, returning to normal.

But journalist Nick Corbishley, who writes about economic and political trends in Europe and Latin America, is warning that the vaccine passports can lead to the implementation of a global digital ID that will threaten privacy and freedom across the world.

Corbishley discussed his new book, “Scanned: Why Vaccine Passports Will Mean the End of Privacy and Personal Freedom,” in an April 1 interview for EpochTV’s “Crossroads” program.

Throughout the COVID-19 pandemic, many people living in Europe and the United States have been conditioned to accept a kind of constant control and surveillance, Corbishley said.

“It’s like this checkpoint society. Wherever you want to go, you have to show your mobile phone, your identity … even if it’s just to go into a supermarket or go into a shop,” he said.

Many people in poor countries don’t have official identification, Corbishley said, so one way of preparing for digital IDs is to introduce immunity certificates.

“It was something that was talked about long before the COVID pandemic,” he explained, adding that companies and corporations participating in the World Economic Forum have been looking for ways to introduce digital identity since at least 2016.

In 2019—months before the COVID-19 pandemic began—the ID2020 Alliance said that immunity certificates could be used as a gateway to establish digital identity, Corbishley pointed out.

ID2020 is an American nongovernmental organization based in New York with a mission to guide the development of global digital ID, according to its website. The ID2020 Alliance is a partnership between the ID2020 and other organizations working to reach that goal.

“ID2020 Alliance partners envision a world in which all people can collect verifiable digital credentials—immunization records, vocational training certificates, proof of residency—and selectively share these records to apply for jobs, access financial services, participate as citizens and voters, and more,” the organization said in a written overview of its purpose (pdf).

The organization is funded “by contributions from philanthropies, private sector partners, and individuals,” the website states. Microsoft Corporation, the Rockefeller Foundation, and the Open Society Foundations—founded and chaired by George Soros—are some of ID2020‘s contributors (pdf).

The vaccine passports are fairly simple and they don’t have many broader applications, but the way they are developed provides possibilities for expanding their functionality, Corbishley said.

He quoted Andrew Bud, founder and CEO of iProov, a biometric tech company that offers authentication products including facial verification.

In February 2021, Bud told Forbes: “The evolution of vaccine certificates will actually drive the whole field of digital identity in the future. So, therefore, this is not just about COVID, this is about something even bigger.”

In many countries, including those in the European Union, the United Kingdom, and Canada, the gradual development of digital identity programs and systems is unseen by the general public, Corbishley said.

“This is all behind the scenes,” he said. “It’s not something they are hiding, but there’s no coverage of this in the mainstream media so people are not aware of it.”

The Canadian Bankers Association published a paper in the spring of 2018 presenting an approach to developing a federated digital ID in the country (pdf).

“By using a federated system, Canadians could verify their identity electronically using a combination of different attributes through the government (like a driver’s license), banking log information and biometrics such as fingerprints or facial recognition,” the paper states.

The Digital Identification and Authentication Council of Canada (DIACC) is working on developing a framework for digital identification, said DIACC President Joni Brennan during a videoconference hosted by the Canadian government on Feb. 1, 2022.

DIACC is a nonprofit coalition of public and private sector leaders.

A pilot digital ID system has already been launched in the Canadian province of New Brunswick as a part of the country’s digitalization project called Smart Province, Colleen Boldon, a director at DIACC, said during the videoconference.

Corbishley commented on the speed at which these digital ID programs are being rolled out.

“This is something that’s happening extremely fast, and it’s happening in a very kind of covert manner,” he said.

Digital currency and digital identity, when implemented together, will form a system that will allow central banks to surveil, track, and trace how people spend their money, Corbishley explained.

“As we saw recently in Canada, they would have the possibility of shutting down anybody who they deemed undesirable,” he noted. It would also resemble the situation in China, which has a social credit system that restricts people who are on blacklists from traveling by train or plane, he said.

In February 2022, Canadian authorities froze, without a court order, the financial assets of individuals and companies that were allegedly involved in or supporting the trucker’s protest in Ottawa, the nation’s capital, against COVID-19 mandates and restrictions across the country.

“It’s a world where we will be constantly nudged into certain behaviors, and constantly punished for certain undesirable behaviors,” Corbishley said, adding that it is a world where people have zero liberty, where power is concentrated in a manner that arguably has never been seen before.

Opposing such a system will become almost impossible, he pointed out.

It’s hard to say exactly how that society will evolve, but based on how things have developed in places like Canada or China, it is not a very enticing picture, Corbishley said.

“It’s a digital gulag, and you are effectively banished from society. … That is a terrifying vision.”

Vaccine mandates and vaccine passports are not going away with the end of the COVID-19 pandemic as the mainstream media report, Corbishley said.

“They are simply being suspended. They are moving to the background,” he said.

In February 2022, the WHO signed a contract with T-Systems, a subsidiary of German company Deutsche Telekom AG, to build a global interoperable system of vaccination passports, according to a company statement.

T-Systems has already developed a technology solution for vaccination certificates for the European Union and a tracing app for the CCP (Chinese Community Party) virus—commonly known as the novel coronavirus—for the German government, the statement said.

“We are being kind of led down the garden path on a lot of these things,” Corbishley said. “We’re being told one thing, and at the same time, our governments are doing virtually the opposite.”

He added that he hopes his book will raise awareness about this.

The WHO announced in December 2021 that it would develop and negotiate a new international convention or agreement on prevention, preparedness, and response to future pandemics.

The decision was made during the special session of the organization’s decision-making body, the second-ever such session since the WHO’s founding in 1948, according to a statement. Other United Nations bodies, nonstate actors, and other stakeholders will also be included in the drafting and negotiation processes, the statement said.

“This treaty would give the organization much greater enforcement powers when it comes to addressing future health crises and future pandemics,” Corbishley said.

The work and negotiations on the new treaty are not being widely reported, and they are happening “more or less behind closed doors,” which is concerning to Corbishley, especially in the wake of the WHO’s poor handling of the COVID-19 pandemic, he continued.

In July 2020, the WHO admitted that China, a WHO member nation, had not reported the CCP virus outbreak in late 2019 to WHO officials as it was supposed to.

About 80 percent of funding for the WHO, comprising 194 member states, comes from private companies and private foundations such as the Bill and Melinda Gates Foundation—the second largest overall contributor after Germany—and the Rockefeller Foundation, Corbishley said.