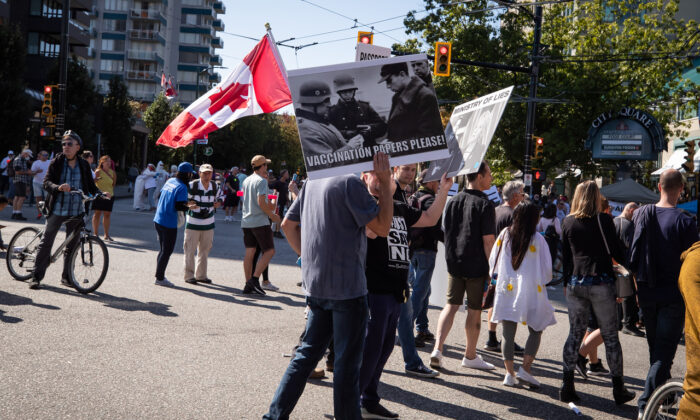 People march during a protest against COVID-19 vaccine passports and mandatory vaccinations for health-care workers, in Vancouver on Sept. 1, 2021. The protest began outside Vancouver General Hospital and police estimated the crowd gathered to be as many as 5,000 people. (The Canadian Press/Darryl Dyck)
Canada

Canadians are taking to the streets and participating in rallies and marches across the country to protest against mandatory vaccination directives and other COVID-19 restrictions, including recent requirements for vaccine “passports” by provincial governments.

British Columbia, Ontario, Quebec, and Manitoba have already introduced a vaccine certification system to fight the pandemic, and protests against the measure have been launched in cities in these provinces.

Thousands of people organized by Canadian Frontline Nurses, a medical freedom advocacy group, gathered outside Vancouver General Hospital on Sept. 1 in a “worldwide walkout” for health freedom. Protesters then marched to Vancouver City Hall where they defended individual choice on whether or not to get vaccinated. In Kamloops the same day, approximately 400 people also marched to protest vaccination passports.

Also on Sept. 1, Ontario Premier Doug Ford was met with hundreds of protesters at Queen’s Park in Toronto when he announced that, starting Sept. 22, a provincial vaccination certificate will be required to access non-essential services such as restaurants, bars, theatres, and other indoor facilities.

Another large rally protesting against vaccine mandates was held outside Toronto Police headquarters on Sept. 2, where constitutional lawyer Rocco Galati addressed the crowd.

More protests are expected in Toronto in the coming weeks, including one scheduled for Sept. 4 at Queen’s Park.

Demonstrations planned in Montreal on Sept. 5 and Sept. 11 are listed on the Quebec Debout (Stand Up Quebec) Facebook page.