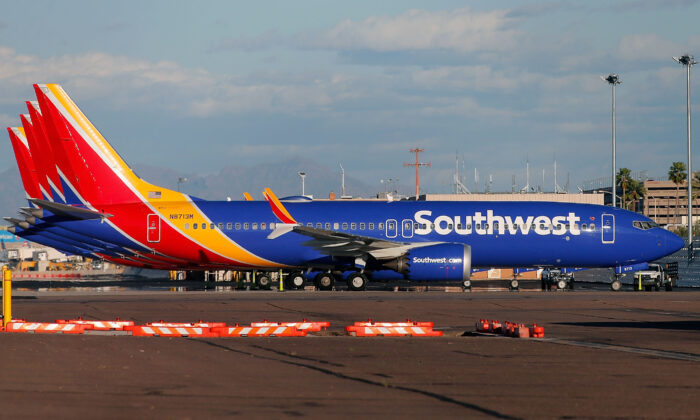 In this file photo a group of Southwest Airlines aircraft sit on the tarmac at Phoenix Sky Harbor International Airport in Phoenix. Over the Columbus Day weekend, Southwest has canceled thousands of flights, reportedly because staff are protesting the company’s vaccine mandate. (Ralph Freso/Getty Images)
Viewpoints

A specter is haunting America—the specter of freedom.

How else could one explain the weekly chants from hundreds of thousands of sports fans, packing into football stadiums and other large venues the way real Americans used to do in the days before Dr. Anthony Fauci, chanting an obscene suggestion to the current resident of the White House?

Eleven months ago, gas prices were low, and the United States was energy independent. Unemployment was also low, and minorities had never fared better in the job market. The southern border was relatively secure, the useless war in Afghanistan was bumping along, enriching the Pentagon but not troubling anybody overmuch, and the future looked bright.

Then came the highly questionable election of 2020, one rendered nearly meaningless by last-minute, COVID-19-driven, illegal changes in state election laws that made a mockery of our democratic traditions and procedures in the name of a chimerical “safety” from a form of the flu. And presto—Joseph Robinette Biden, Jr., who’d been in Washington for more than half a century, was suddenly president of the United States.

Today, the economy is in chaos; supply chains have been disrupted; inflation is soaring; race relations are poisonous; crime, including murder, is way up; the energy business is assaulted on all fronts, even as the industrialized nations face the prospect of a winter without reliable power; and China is rattling its plastic sabers.

And yet, the befuddled Biden’s principal concern is forcing a thoroughly anti-American, unconstitutional series of vaccination “mandates” on the U.S. workforce that has—thankfully—finally brought the country to its boiling point.

In Florida, Southwest Airlines has had to cancel hundreds of flights, ostensibly because of the weather (in mild October?), but more than likely because its pilots are staging a sickout in defiance of their company’s buckling to administration pressure. The pilot’s union has already gone to court to block the mandate, which applies to private companies doing business with the feds, and there have also been reports of a slowdown by FAA air traffic controllers in Jacksonville as well.

Biden’s misbegotten mandate also applies to U.S. troops, who must be inoculated against the Chinese-manufactured, Fauci-funded virus in stages over the next month or so—but so far, hundreds of thousands of servicemen, including members of elite units, have refused.

Other resistance has developed among Amtrak workers; the Los Angeles County Sheriff’s Department, which will refuse to enforce the mandate; and even some NBA stars. This week, a federal appeals court agreed with 16 student-athletes at Western Michigan University who have challenged the school’s vaccine mandate on religious grounds and upheld a lower court ruling that enjoined the university.

Which brings us back to the current collegiate sensation, Brandon. How great is it to see the return of good old-fashioned irreverent and exuberant U.S. college students, pungently expressing themselves to the powers that be on national television, forcing sideline reporters to euphemize their chants and thus creating an instant, family-friendly meme suitable for all public occasions?

Youth’s traditional contempt for authority and pomposity has rarely been so welcome: Who says they’re all just a bunch of mind-numbed, obediently woke social-justice warriors trying to remember which politically correct alphanumerical comes next in the sequence, “LGBTQ2-plus,” as Justin Trudeau, Canada’s hapless prime minister, did the other day.

For 18 months, Americans have sheepishly shuffled around like peasants, their faces masked like slaves, meekly bowing to Fauci’s increasingly deracinated demands on their behavior, no matter how whimsical or ridiculous.

When the late Alan Rickman, playing the evil Sheriff of Nottingham in the 1991 film, “Robin Hood: Prince of Thieves,” snarled, “Cancel the kitchen scraps for lepers and orphans, no more merciful beheadings … and call off Christmas!” we all laughed. Who’s laughing now, as Fauci threatens once more to do just that?

The essence of tyranny isn’t cruelty, but arbitrariness: In the old Soviet Union and other leftist police states, the rules would change at irregular intervals, and the populace was forced to at least pretend to believe that two plus two equals five.

It’s just so in today’s America, where biological sex has become nebulous “gender” (a hijacked grammatical term), and the lunatic asylum formerly known as California has just banned sex distinctions in toy retailing by ordering “gender-neutral” displays in which pink and blue sections are now banned.

There’s danger in the mockery, of course. With the breakdown of not only supply chains, but of the labor market as well—all by design, it must be said—the quality of life here will continue to deteriorate. The drive toward enforced, punitive socialism is always accompanied by violence and misery, with hordes of released criminals on the streets acting as unpaid enforcers of chaos and, in places such as Riker’s Island, actually running the prisons, thanks to mandate-provoked “staffing emergencies.”

The red-diaper Cloward-Piven strategy, first described in 1966, has as its goal the overloading of social systems leading to their breakdowns, after which “order” can be imposed at government gunpoint. This is why the satanic left constantly invokes “crises,” some real and some imaginary, and does its best to provoke them so they can later “solve” them. The more the left is resisted, the more infuriated it becomes.

Which is why Biden is such a dangerous man at this point. He’s merely a figurehead, as by now everybody knows. He even has a fake Oval Office in which he can stage various events in the nearby Eisenhower Executive Office Building, across from the West Wing. He does what he’s told, signs whatever is put in front of him, sundowns quickly, and then is whisked off the stage so the third, and most troubling, Obama administration can do its work in the darkness of Kalorama.

Still, laughter is the best medicine, and the more Brandon—er, Biden—is ridiculed by the children, the faster the Emperor’s new clothes will melt away, and we can all see just how naked he is and what he’s doing. And after that, it’s up to us.

Workers of the world, unite. You have nothing to lose but your supply chains.