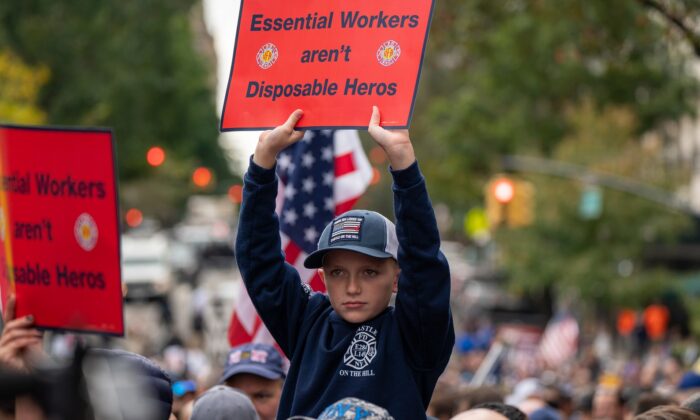 Vaccine Mandates Are an Exploding Cigar

The exploding cigar, often seen in cartoons, is the perfect metaphor for vaccine mandates. You remember the gag: A fat cat is offered a big stogie. After a few puffs, the cigar explodes, spreading soot all over the hapless victim’s face.

President Joe Biden lit a national cigar with his plan to order larger employers and those that do business with the government to force their workers to receive the jab. This is the wrong approach.

Unlike Australians—who mostly accepted the far more draconian controls—we are generally not a sheep-like people. We believe in doing the right thing, but resent being herded.

So while the threat of job loss certainly has induced some of the “vaccine hesitant” to acquiesce, it seems to me that the mandates are in acute danger of exploding in our face.

For example, the Air Force is set to lose 12,000 trained and ready personnel who have refused the jab. The Navy, Army, and Marine mandates don’t become effective until later in the year, but if the Air Force is any guide, we can expect tens of thousands of other soldiers to face such discipline.

I understand that members of the military are in a different liberty category than civilians. But fewer than 100 Army soldiers have died from COVID-19, and a large percentage of those were reservists. Are the jabs really worth losing trained military members and the potential cost in readiness at a time when China is a growing military threat and the vast majority of military members have already been vaccinated?

Now consider Southwest Airlines. It canceled more than 1,000 weekend flights recently, harming the airline’s reputation for reliability. Southwest denied that its vaccine mandate caused the dislocation. But it may not be a coincidence that Southwest just dropped its plan to put all unvaccinated personnel on unpaid leave.

The same thing may be happening to American Airlines. The carrier has been canceling thousands of flights. Is there a connection? AA says not. But isn’t it interesting that airline travel hit such significant turbulence at the same time vaccine mandates were about to bite?

Then there’s the supply chain crisis. The last thing we need is vaccine mandates that will further tighten the already squeezed labor pool needed to remedy the problem—particularly of truck drivers, of which there are already some 80,000 fewer than needed to move goods from our logjammed ports.

That’s why big business and labor union lobbyists are pressing the administration to delay mandates until after Christmas. Especially worrying: The National Trucking Association has warned that “37 percent of drivers” are expected to refuse the jab, “through retirements, resignations and workers switching to smaller companies not covered” by the Biden mandate.

It’s not just the private sector. New York City Mayor Bill de Blasio chirpily announced his own mandate for city employees not too long ago. It has not gone well. The New York Post just reported, “The FDNY shuttered 26 fire companies citywide on Saturday due to staff shortages caused by the COVID-19 vaccination mandate, according to furious elected officials, who ripped the move as ‘unconscionable’—and warned it could have catastrophic consequences.”

Meanwhile, jab-resistant cops are still working while city bureaucrats review requests for medical and religious exemptions. But if thousands of police officers decide to bail rather than jab, New York’s crime wave will only get worse. Then there are the thousands of sanitary workers who face layoffs because they haven’t yielded—meaning the Big Apple could soon be known as the Big Stinky.

Health care is also suffering from mandate-itis. Thousands of health care workers have been laid off, forcing some hospitals to restrict service. We should also take note that hospitals, once in the vanguard of the mandate movement, have recently balked, with only 42 percent now having imposed vaccination requirements on employees.

Let me be clear. I am not anti-vaccine. Indeed, I completed my two-shot dose last March and, based on my doctor’s recommendation, plan to soon receive a third shot.

But in free societies, mandates must be reasonable—and a national diktat fails that test.

What would an alternative policy look like? Urge people to take the vaccine and continue to explain why it’s a good idea without exhibiting a derisive attitude or using divisive spokespeople like Anthony Fauci. Welcome reasonable dissenting opinions so that people know they have had a chance to hear fully from all sides. Be honest about what we don’t know and when scientific understandings shift—as they always do—be candid about what changed and why.

In short, treat us like free Americans. Not only will that promote comity, but I believe it would also make skeptics more likely to accept the shot. And here’s a big bonus: no national exploding cigar.