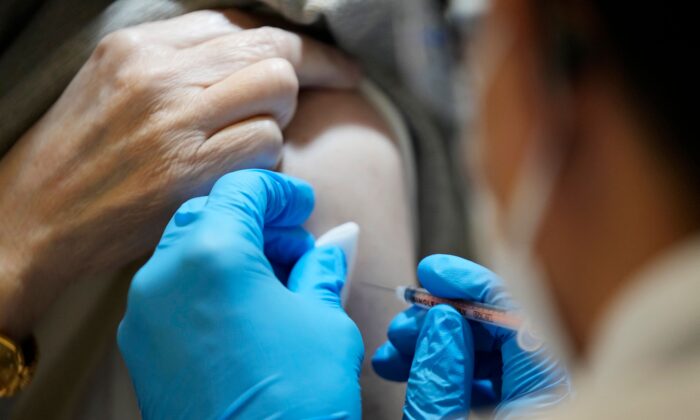 A person receives a COVID-19 vaccine in Tokyo on Jan. 31, 2022. (Eugene Hoshiko/Pool/AFP via Getty Images)
By Zachary Stieber

People of all ages are at higher risk of death from heart inflammation after COVID-19 vaccination compared with the typical occurrence of myocarditis death, according to a new study.

Researchers in Japan analyzed deaths caused by myocarditis, a form of heart inflammation, where the myocarditis set in within 28 days of vaccination. Thirty-eight deaths fit the definition, about half of which were diagnosed by autopsy and or biopsy, with the others being determined through tools such as blood tests and electrocardiogram.

Researchers then took the vaccinated mortality rate and compared it with the death from myocarditis rate from the general population before the pandemic, in the years 2017 to 2019.

“Using the disclosed data by the Japanese government, we observed increased myocarditis mortality rate ratio in the SARS-CoV-2 vaccinated population compared with general population during three years pre-COVID-19 pandemic era, especially in young adults,” the researchers, Dr. Sintaroo Watanabe of the Japan Marine United Corporation and Dr. Rokuro Hama of the Japan Institute of Pharmacovigilance, said. SARS-CoV-2 is a name for the virus that causes COVID-19.

“However, not only in young adults, but also in the middle aged (40s) and in the elderly and overall vaccinated, increased risk of myocarditis death is associated with vaccination even without consideration of healthy vaccinee effect,” the researchers added.

The “healthy vaccinee effect” refers to how vaccines are sometimes not given to people with poor health, a factor that can skew study results in favor of vaccination.

Even estimating the lowest level of the effect, the risk of COVID-19 vaccination on myocarditis death would be at least four times higher than the unadjusted mortality risk, Watanabe and Hama said. And there are signs that some post-vaccination deaths aren’t reported properly, the researchers said.

“Based on the results of this study, it is necessary to inform public about [sic] that the risk of serious myocarditis including death may be far more serious than the risk reported before and that it occurs not only in young persons but also in elderly,” they said.

The study was published as a preprint ahead of peer review on medRvix (pdf).

Limitations of the paper included the diagnosis of myocarditis death after vaccination being based on a doctor’s diagnosis.

Experts across the world have found causal links between myocarditis and an associated condition, pericarditis, and COVID-19 vaccines, and a recent study in England found that 345 deaths occurred in people who received a COVID-19 vaccine.

The risk of myocarditis is highest in young males, but U.S. reports have indicated a higher-than-background rate in men as old as 49, as well as females aged 12 to 29.