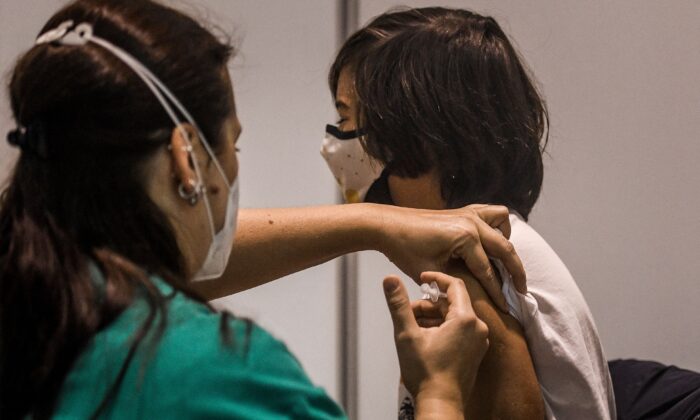 Vaccinated and Boosted People Have Less Protection Against BA.5 Than BA.2 Variant: Study

People who have received a COVID-19 vaccine and a booster shot were more likely to end up in a hospital when infected with BA.5 than BA.2, according to a new study.

Researchers in Portugal found that BA.5 cases among the group had 3.4 times higher odds of hospitalization when compared to BA.2 cases.

Both BA.2 and BA.5 are subvariants of Omicron, a SARS-CoV-2 strain. SARS-CoV-2, also known as the CCP (Chinese Communist Party) virus, causes COVID-19.

Those who were boosted did appear to be better off than those who only received a primary vaccination series.

The time since vaccination was not measured.

The study also indicated that the protection against mortality was lower for BA. 5 vaccinated and boosted cases, when compared with BA.2 cases.

Any form of vaccination appeared to protect better against both hospitalization and death, regardless of subvariant, according to the study, though researchers did note prior infection status in that portion of the analysis. The group also excluded people who only received one dose of a vaccine.

“Our results suggest that higher immune evasion of BA.5 might explain the surge in cases seen in countries with high BA.5 prevalence. The substantial difference in risk reduction associated with boosted vaccination between BA.5 and BA.2 emphasizes the importance of high vaccination coverage to prevent severe COVID-19 associated outcomes,” Irina Kislaya, an epidemiologist, and the other Portuguese authors wrote in the preprint paper.

The researchers, funded by the GenomePT project and other organizations, utilized a national database of electronic health records, analyzing 27,702 samples collected between April 25 and June 10, hospital admission data from the Integrated Hospital Information System registry, and death information from the national Death Certificate Information System.

Most people were more likely to be re-infected with BA.5 when compared with BA.2, the researchers found. The only exception was vaccinated and boosted people who had no sign of a previous infection.

The results indicate that both vaccination and prior infection, or natural immunity, performed worse against BA.5 than BA.2, adding to the data pool suggesting BA.5 is more immune-evasive than prior strains and subvariants.

One recent study, from Qatar, found that people with a prior Omicron infection retained strong protection against symptomatic reinfection from either BA.4 or BA.5, but that people who were sickened with a pre-Omicron strain had little shielding against infection with symptoms.

Danish researchers, meanwhile, said in a separate study that a prior Omicron infection was “highly protective” against BA.5, though there were signs that BA.5 infection was linked with an increased risk of hospitalization and that unvaccinated were less likely to get infected than the vaccinated.