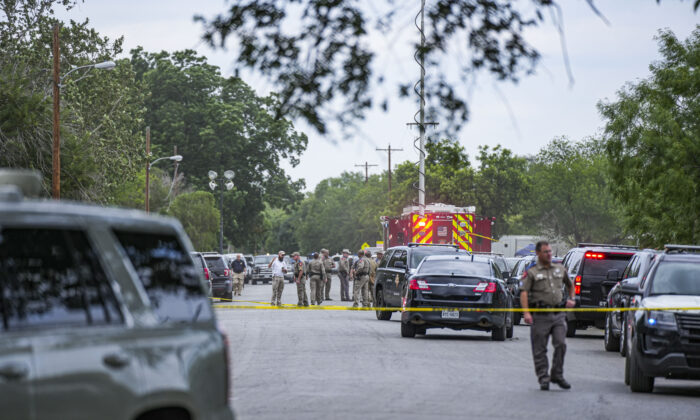 Police cordon off the streets around Robb Elementary School after a mass shooting, in Uvalde, Texas, on May 24, 2022. (Charlotte Cuthbertson/The Epoch Times)
Texas

State Rep. Dustin Burrows said that police officials Uvalde were asked to appear in front of the House committee after the incident that left 19 students and two teachers dead. However, those officials haven’t voluntarily agreed yet.

“The House Committee is simply seeking the truth. Most have fully cooperated and want to help determine the facts for the Uvalde community and all Texans. I do not understand why Uvalde PD, who routinely questions witnesses itself, would not want the same,” Burrows, a Republican, wrote in a Twitter post on Thursday.

During a hearing on Thursday, Burrows said that the Uvalde City Independent School District and its police department, which serves Robb Elementary, is cooperative with their panel’s requests, according to local news outlet KENS-5 TV.

“The Uvalde [School] Police Department is being cooperative. We look forward to their testimony. We are very appreciative of that. There is a question mark about the Uvalde Police Department itself, about whether or not they will visit with us voluntarily, and we will see if they do that or not,” he said.

The vice-chair of the panel,  Democrat Rep. Joe Moody, said they do have subpoena power. It’s not clear if they will try to compel the city’s police department to attend the hearing.

“This is not a committee that starts with a conclusion and goes from there,” Moody said, according to KENS-5. “We are going to thoroughly review everything about this tragedy and let those facts speak for themselves. That’s our job.”

Since the May 24 shooting, there have been questions and shifting narratives around how police responded to the incident. A top Texas state official said at a late May news conference that police delayed their response because the incident commander believed the gunman, 18-year-old Salvador Ramos, had barricaded himself in a classroom and didn’t believe he was an active shooter.

Texas Department of Public Safety (DPS) officials has also claimed that the Uvalde schools police chief, Pete Arredondo, has not cooperated with their inquiry into the shooting and response. Arredondo on June 9, however, defended the delay in the response to the shooting.

“The only thing that was important to me at this time was to save as many teachers and children as possible,” Arredondo said, claiming in a Texas Tribune article that a locked classroom door stood between police and Ramos.

“Each time I tried a key I was just praying,” Arredondo said, adding that 77 minutes after the shootings began, officers were able to unlock the door and kill the gunman. Texas DPS officials last month said a Border Patrol tactical team shot and killed Ramos.

“Not a single responding officer ever hesitated, even for a moment, to put themselves at risk to save the children,” Arredondo told the outlet. “We responded to the information that we had and had to adjust to whatever we faced. Our objective was to save as many lives as we could, and the extraction of the students from the classrooms by all that were involved saved over 500 of our Uvalde students and teachers before we gained access to the shooter and eliminated the threat.”

The Epoch Times has contacted the Uvalde Police Department for comment on Burrows’ claims.