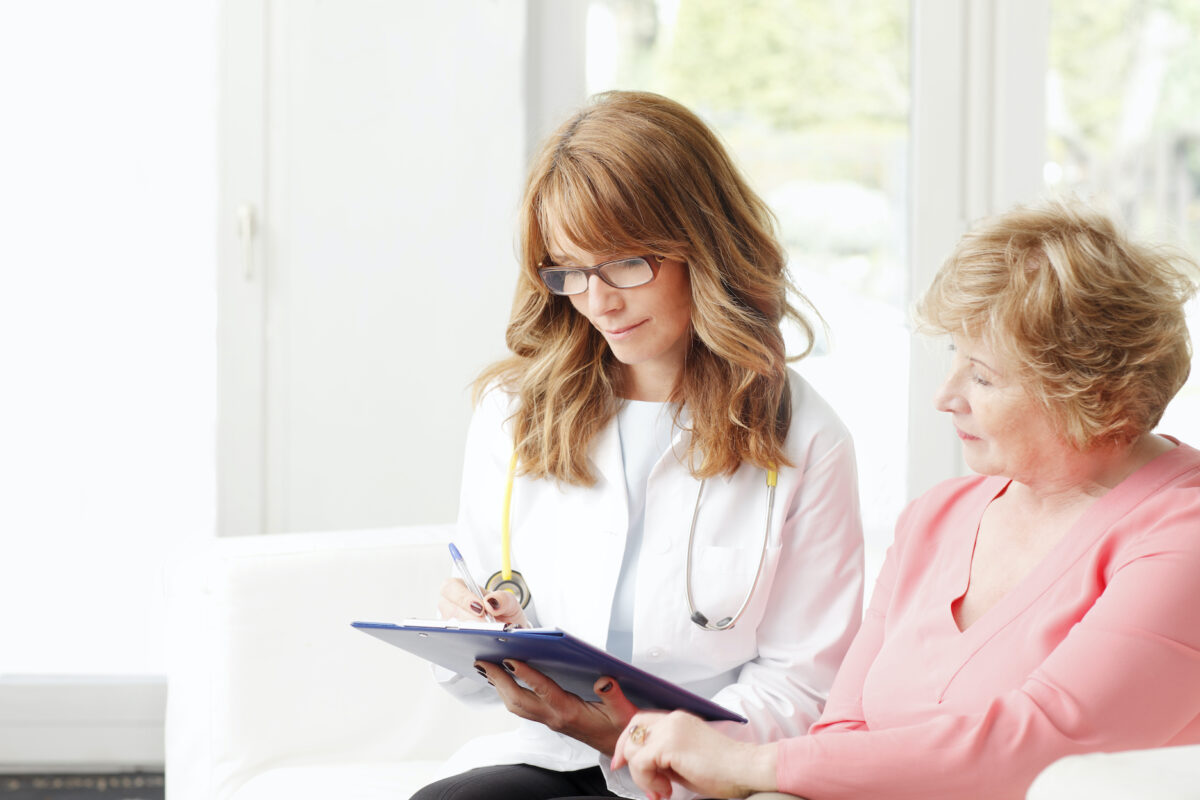 Hormone replacement therapy can put some women at greater risk of cancer if they don't take due care.(Kinga/Shutterstock)
Cancer

Uterine Cancer: A Common Cancer No One Talks About

A.J. is a 58-year-old mother of three who went through menopause at the age of 50. She came to me complaining that she “got her period” last month. The bleeding stopped, and she’s had no problems since. It’s been eight years since she had her last normal period. She never went on any hormone replacement treatments, and otherwise has been fairly healthy. She has mild high blood pressure, which is well controlled on medication. A.J. is a little overweight, but so am I.

This complaint and exam is a relatively routine process in my practice. Her pelvic ultrasound showed what we call a “thickened endometrial lining.” The endometrium is the lining of the uterus (womb). This is where a baby would grow and where a woman’s menstrual cycles bleed from every month in normally menstruating woman. A.J.’s lining was thick, defined by the strict measurements we can perform during the ultrasound. When we find such thickening, there is a higher chance that she could have pre-cancerous cells or even endometrial (uterine) cancer itself. In the old days, and I am old enough to have been there, we would do a D and C (dilatation and curettage) in the operating room on all these women. Today, we have a simple, minute, in-office biopsy probe, which we can perform with no need for anesthesia. This is what we did. The results came back several days later showing she unfortunately did have endometrial cancer.

The vast majority of women who develop uterine cancer are between 50 and 70 and most are in menopause. Post-menopausal women are at higher risk if they got their period early in life or went through menopause late. Obesity is a risk factor as well. Peripheral estrogen in fat cells can overstimulate the endometrial cells and can turn into pre-cancerous cells as well as endometrial cancer itself. Endometrial cancer is a type of uterine cancer. Women who have never had any children are also at a higher risk of developing uterine cancer.

A lot of women today go on hormone replacement therapy, which is usually estrogen and progesterone. This combination can generally be used safely with little very fear of developing uterine cancer.

There are other risks from hormone replacement therapy, such as increased risk of heart attack, blood clots, and in some cases breast cancer. There are also other benefits, such as treating sometimes debilitating menopausal symptoms as well as improving bone health. The risk benefits must be analyzed prior to starting and decisions made together with your provider. Due to concerns about the side effects of hormone replacement therapy, the FDA and CDC encourage doctors to ensure the lowest possible dosage.

The discussion here is about uterine cancer and not hormone therapy in general.

We also know that women who take unopposed estrogen in hormone replacement therapy are at a higher risk of developing endometrial pre-cancerous cells as well as uterine cancer. This is why all women who have a uterus and are receiving estrogen therapy in menopause should be on oral progesterone therapy as well. This dramatically helps protect the uterus against the estrogen over stimulating the endometrial lining, and the progesterone can help prevent the development of endometrial cancer.

Other conditions such as polycystic ovaries as well as diabetes also place women at a higher risk of uterine cancer. There is, however, no strong family history correlation, with only a few exceptions.

The “upside” about uterine cancer compared to many other cancers is that the five-year survival rate for stage one cancer is close to 90 percent. Almost all stage one disease is cured by surgery alone. The other fortunate aspect is that in more advanced countries, like the United States, most uterine cancers are diagnosed early.

There is a rare genetic disorder called Lynch syndrome. This is a hereditary cancer syndrome where a person with colorectal cancer is also found to have endometrial cancer or stomach, pancreatic, intestinal, liver, kidney, and maybe even breast cancer as well. About two to three percent of endometerial cancer is thought to be due to Lynch Syndrome. The oncologist would most likely do a blood test looking for the gene mutations that can be identified.

A.J. decided to have surgery and be done with it. She was referred to a gynecologic oncologist (women’s cancer surgeon) who did the hysterectomy. She was fortunate and did well. She didn’t need any hormone therapy and is alive and well.

Another patient, L.K., was not so fortunate. This woman came to me for a second opinion, maybe it was even a third opinion. She was 62, had no children and was on unopposed estrogen therapy. She felt better on the estrogen and felt horrible when she took any progesterone. Remember progesterone must be given to women who have a uterus and want or need to be on estrogen therapy. She also had several episodes of what we call post-menopausal bleeding, which is basically having bleeding well after there should not be any.

The doctor she was seeing did an ultrasound and said all was fine. She continued to treat L.K. with unopposed estrogen, not surprisingly she continued to have bleeding.

She finally went to see a regular gynecologist (the doctor prescribing the estrogen was not a gynecologist) and had a biopsy. The results showed “complex atypical endometrial hyperplasia.” This is a significant precancerous finding. L.K. needed a full D and C, since the biopsy was just of one small area of the uterine lining and can easily miss an adjacent cancer. L.K. refused and went back to her estrogen doctor. She continued on like this for close to 12 more months with continued vaginal bleeding, finally showing up in my office. Her daughter “forced” her to come in to be seen by me.

L.K. finally did have that D and C, which did now unfortunately show endometrial cancer. She finally agreed to have surgery, a hysterectomy. This time, the gynecologic oncologist found that the uterine cancer had spread to the bladder as well as other adjacent organs.

I have lost contact with L.K. and can only hope she is alive and doing well. There are a lot of things in life that can make us feel better for the moment but can be very harmful if we continue. Unopposed estrogen (without any protective progesterone) in women with a uterus can be one of them. Not all women will develop cancer, but the risks are much greater. Driving on a motorcycle at 100 miles an hour without a helmet may feel good, but the end result could be pretty bad if you hit a tree.

Uterine cancer is a very treatable and curable cancer. Everything we do in medicine as well as in life is about risk versus benefits. We need to think about what we are doing and recognize the cost of our actions. Taking risks with one’s health is rarely worth it. A bad decision can end your life.