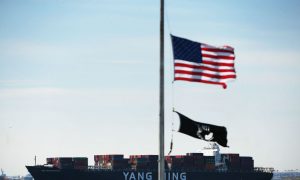 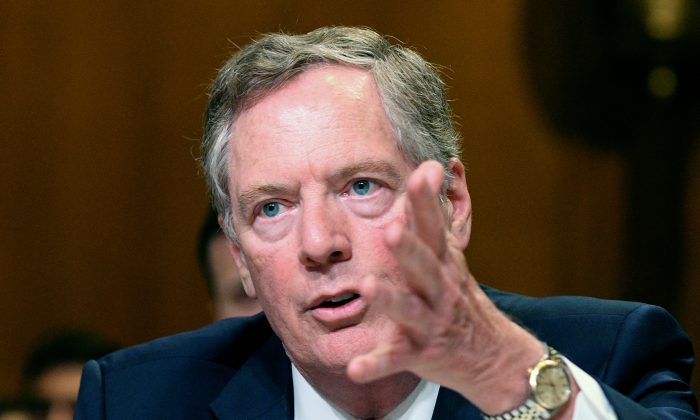 U.S. Trade Representative Robert Lighthizer gestures as he testifies before Senate Appropriations Commerce, Justice, Science, and Related Agencies Subcommittee hearing on the proposed budget estimates and justification for FY2019 for the Office of the United States Trade Representative, at the Dirksen Senate Office Building in Washington, U.S. on July 26, 2018. (Mary F. Calvert/Reuters)
Politics

WASHINGTON—U.S. Trade Representative Robert Lighthizer has assured lawmakers that companies will be able to request exclusions on tariffs on $200 billion worth of goods under discussion with Beijing if talks do not yield a deal by the March 2 deadline.

Lighthizer told U.S. Senators he will extend a process of requesting exclusions that is currently only available on an earlier round of 25-percent tariffs on $50 billion worth of goods. U.S. companies currently have no recourse to seek exemption on the latest round of 10-percent tariffs rolled out in September.

The United States has levied the tariffs since mid-2018 as a tit-for-tat trade battle between the two countries escalated.

The Trump administration was scheduled to increase the most recent tariffs to 25 percent but delayed it until March 2 to allow for negotiations between Washington and Beijing to try to resolve their differences.

If the talks don’t yield a deal by the deadline, Washington is set to proceed with higher tariff rate, which many companies have warned could cause supply disruptions.

“If the duty rate on the $200 billion tariff actions is raised to 25 percent, USTR will initiate an appropriate exclusion process,” Lighthizer said in a letter dated Jan. 11 to pro-trade Republican Senator Pat Toomey.

Toomey, of Pennsylvania, and Democratic Senator Doug Jones from Alabama have led a bipartisan group of senators to press the administration under President Donald Trump for exclusions from the tariffs.

Escalating tensions between the United States and China have roiled global markets and cost billions of dollars for both.

Senator Chuck Grassley of Iowa said on Tuesday that Lighthizer told him that he saw no progress on structural issues during those discussions.

Higher-level talks are scheduled in Washington later this month.

USTR is still addressing exclusion requests on the earlier round of tariffs after granting nearly 1,000 of the requests last month, Lighthizer said in the letter.