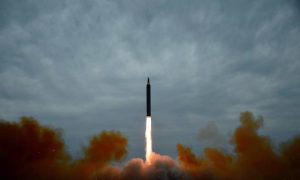 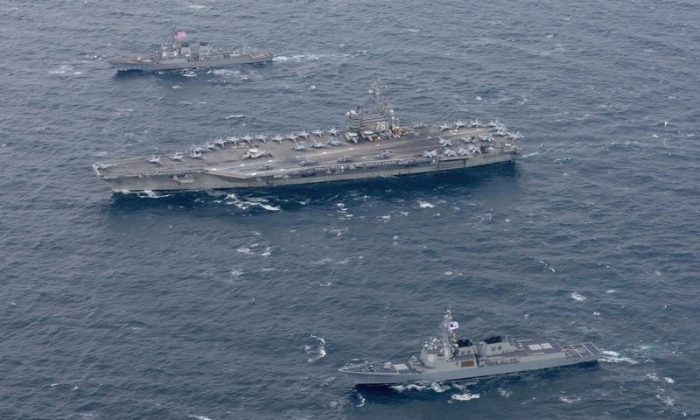 The United States launched a large-scale military drill in waters east of the Korean peninsula on Oct. 18 in a show of force amid threats of nuclear war from North Korea.

The USS Ronald Reagan—the U.S. Navy’s largest warship in the region, with a crew of 5,000 sailors—launched nearly 90 F-18 Super Hornet sorties from its deck during the war drills with its South Korean ally.

“The dangerous and aggressive behavior by North Korea concerns everybody in the world,” Rear Admiral Marc Dalton, commander of the Reagan‘s strike group, told Reuters in the carrier’s hangar as war planes taxied on the flight deck above.

“We have made it clear with this exercise, and many others, that we are ready to defend the Republic of Korea,” he said, referring to South Korea.

In total 40 warships were deployed as part of the joint drills by the two allies.

The drills come just a week after the United States flew two B1-B bombers, accompanied by Japanese and South Korean fighter jets, over international waters in the Korean Peninsula.

President Donald Trump has taken a two-fold approach to North Korea. He has instructed his Secretary of State and other cabinet officials to put diplomatic and economic pressure on North Korea in an attempt to get the regime to denuclearize.

In addition, Trump has instructed his senior military leaders to draw up detailed military options against North Korea in case it’s needed, to put pressure on the regime.

Trump has criticized previous administrations for not having taken care of the North Korean nuclear threat. The communist regime broke a deal it made with the Clinton administration in 1994, when its nuclear program was still in its infancy.

Now, military and intelligence experts believe North Korea is close to completing a small enough nuclear weapon that can be delivered using a ballistic missile. While some technical problems remain for rogue state, they believe it’s just a matter of time before those are resolved.

The Reagan’s presence in the region comes ahead of President Donald Trump’s first official visit to Asia, beginning in Japan on Nov. 5, and then South Korea.

The North responded to the military drills by threatening South Korea with “nuclear war” and “imminent catastrophic disaster.”

The regime also threatened the United States with “the most miserable death.”

A high level North Korean defector said at the Asia Society earlier this week that he doesn’t expect North Korea to last one year under the new sanctions. However, North Korea has vowed not to give up its nuclear program, which dictator Kim Jong Un sees as a key tool for its survival.