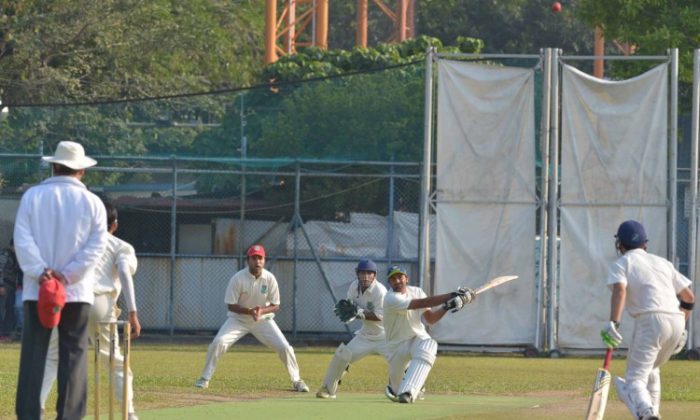 Hazeeb Amjad hits out against left-arm spinner Karan Shah on his way to a match winning 86 not out for USRC/Millennium against KCC Optimists at the Mission Road ground on Sunday Dec 9. His partner (right) is Anus Khan who made 31 not out. (Bill Cox/The Epoch Times)
News

Two matches were completed on Sunday Dec 9 in Round 11 of the Hong Kong Cricket Association Sunday League: HKCC Optimists played HKCC Scorpions at the HKCC Ground and USRC/Millennium played KCC Infidels at the Mission Road ground.

Infidels won the toss, batted first and were all out for a total of 153 off 49.5 overs. The total was helped significantly by 43 extras, which included 31 wides. The batsmen generally struggled on an artificial pitch of varying speed and bounce, and at one time the score was standing at 69 for 5 wickets against the USRC/Millennium attack. All six of the USRC/Millennium bowlers took wickets, but Azeeb Ajmal was the most successful, taking 4 wickets for 36 runs.

USRC/Millennium openers in reply scored 36 before No. 2 batsman, Jahanzheb Khan, was caught out for 13 off the bowling of the young Hong Kong Squad left-arm spinner, Karan Shah. His partner, Naveed Aktar, was out soon after, caught behind the wicket off the bowling of Ateek Rehman having scored 27 with the total standing at 40. Shah then picked up the wicket of Awas Mohammed for one, making the score 44 for 3 wickets. However, this was the last wicket that Infidels took as Hazeeb Amjad (86 n/o) and Anas Khan (31 n/o) made a match-winning stand of 112 and taking the score to 158 for 3 off 33.4 overs.

Hazeeb Amjad was awarded Man of the Match for his match winning performance of taking 4 wickets and scoring an unbeaten 86 runs.

Scorpions won the toss and batting first, scored 184 off their allotted 50 overs. Optimists, in reply, just managed to pass their club-mate’s total with just three balls remaining of their innings, winning a very close and exciting match.

“A good example of a relatively low-scoring game producing a tight finish,” he told The Epoch Times.

“The batting track was pretty good, if a bit on the slow side. Good bowling by both sides prevented the batters from dominating. In fact, in both innings it needed a patient innings from a middle-order batsmen, Matt Rafter for Scorps and Chris Williams for Opts, to stabilise their respective innings after wickets had fallen,” Nissim further explained.

“Chris Williams was rightly nominated as Man of the Match for his innings, which enabled Opts to, literally, scramble over the line in the last over,” he added.

This win takes Optimists off the bottom of the ladder at the expense of the middle order position of their club-mates.

Next Week
Only one match is scheduled for Sunday Dec 16: LSW JKN play LSW Knights at Mission Road.