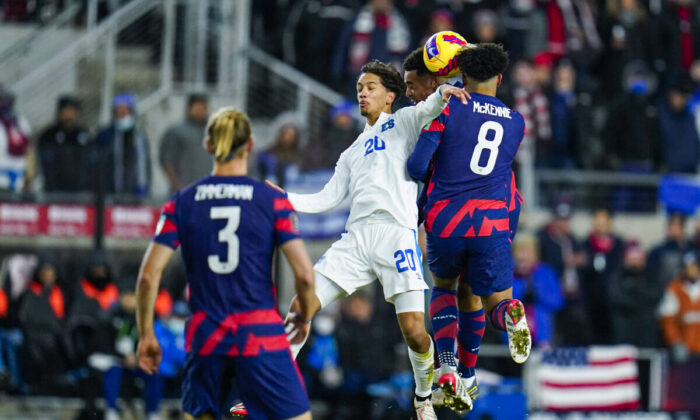 El Salvador’s Enrico Duenas (20) goes up for the ball against United States’ Weston McKennie (8) and Tyler Adams, back, Walker Zimmerman (3) looks on, during the first half of a FIFA World Cup qualifying soccer match, in Columbus, Ohio, Jan. 27, 2022. (Julio Cortez/AP Photo)
Soccer

Antonee Robinson was heroic scoring the only goal the USMNT would need to defeat the El Salvador National Soccer Team on Thursday night at Lower.com Field in Columbus, Ohio.

The win placed the U.S. squad in second place in World Cup regional qualifying with 18 points, one behind Canada. They will travel to play Canada Sunday to try to improve their record of 5–3–1 against the current CONCACAF leaders.

It’s been 15 years since El Salvador has won on U.S. soil; the match was their first World Cup qualifying game in below-freezing temperatures 20 years ago against Canada.

Typical of many qualifiers this past year, the United States had difficulty scoring in the first half with eight shots, with none on goal.

Striker Jesus Ferreira was unable to convert two opportunities at goal in the 16th and 19th minute. The latter attempt was from one of several crosses by Timothy Weah, from the right that was a little high, Ferreira attempted a shot with his right foot up but pushed the ball over the crossbar.

“We lacked connection in our pressing,” said U.S. coach Gregg Berhalter. “The ambition to play forward and get behind them was missing for the 90 minutes. We had it in spurts.”

El Salvador’s best opportunity came on a counter attack in the 28th minute, resulting in a right-footed low shot by Alex Roldan that missed just left of the diving U.S. goalkeeper, from outside of the top-right corner of the box.

For the United States, left defender Robinson, scored the only goal in the game in the 52nd minute with driving low-driving volley by the right side of the diving Gonzalez.

The play began with Weston McKennie passing to Weah along the right flank, who beat defenders Roberto Domínguez and Eduardo Vigil for a shot near goal that was blocked by goalkeeper Gonzalez.

The ball deflected to Ferreira, who headed a pass across the box toward Christian Pulisic and left it for an oncoming Robinson from eight yards for his second goal for the United States. In September, Robinson scored against Honduras in the 42nd minute leading to a 4–1 win.

Robinson, nicknamed “Jedi” from Star Wars, currently plays in the EPL for Fulham; the 24-year old is the son of American parents, and grew up in Liverpool, England.

“It wasn’t the prettiest game,” said Robinson. “We’re one step closer to our goal (of WC qualifying).”

With Pulisic fully recovered from his ankle injury from last summer, this was the second game in nearly three years that he was in the starting lineup with fellow super-star McKennie, and Tyler Adams.

U.S. goalie Matt Turner got to start again, as Zack Steffen stayed in England with a back injury.

Turner is the reigning MLS Goalkeeper of the Year for the New England Revolution, and will play for Arsenal in the summer during the transfer window. He has made 97 starts for the Revolution, along with 21 career shutouts; and also won team MVP in 2020.

The USMNT has five games remaining; and estimated to lock up one of the top three qualifying spots with seven more points out of a possible 15.

The United States is away at Canada on Sunday, and hosts Honduras on Wednesday at St. Paul, Minnesota. World Cup qualifying ends in March at Mexico and Costa Rica, with a home game in between with Panama in Orlando, Florida.